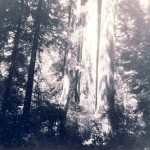 My very first job that I can remember was selling fishing worms at 50 cents a box, later raised to one dollar. I’d cut quart milk cartons into the shape of a box with a lid that folded down and staple the box with light green shelf paper. Each box had a white label with red ink print saying “Susy’s Spirited Worms”—I think my father probably came up with that name. I still have the stamp. He built a wooden wrack in the back yard to support two half pipes into which I’d dump the coffee grounds every day. The second summer my younger brother helped out. Sometimes we’d run out of worms and have to go find some by digging around in wet places to replenish our supply. I’m sure this would be illegal now—selling earthworms to park visitors from within the park. 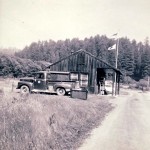 mily moved from Castle Crags to Jedediah Smith Redwoods, about 10 miles inland from Crescent City, I’d just finished my freshman year at Shasta Junior College in Redding. Across Highway 199 from the park was a small motel and that first summer I worked cleaning motel cabins, a good awakening to the outside world for a somewhat sheltered kid. In the afternoons I’d walk home and then go down to the river with my brother to swim  in the deep pools of the Smith River and feel cleansed from my morning chores. That fall I went to Humboldt State, living in the girls’ dormitory.

The next summer (1958) brought a better job and new experiences. My apartment was in one end of the Recreation Building, a typical older building even then—kind of dark, a big fireplace, some old tables. I was the first female park aide at Prairie Creek, a redwood park of 14,000 acres located about 50 miles north of Eureka. Most of my job consisted of working at the entrance station. Sometimes I’d drive the electric cart down into the campground to check on campers and see whether anyone had questions or needed wood. 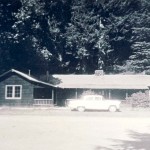 There were two or three college-aged fellows who had an apartment at the other end of the building. Both apartments had stoves and sinks and mine had a laundry tray. While theirs was equipped with a restroom and shower I had to walk several hundred feet to the public facility. I think, that at one time, there may have been a full apartment where I was but part had been walled off to make room for the park office. This building is still in use and, the last time I was there, was being used as a visitor center and park office.

My mother sewed a park patch on the shoulder of a short-sleeved white blouse and I wore a green cotton skirt. That was my uniform since none were established yet for women, that we knew of. 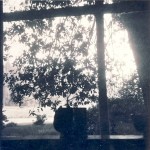 The view out my window was toward the prairie and often elk would be grazing out there. They also enjoyed the apples from the old orchard with its scattered trees. Tourists loved them and sometimes tried to get closer to these large animals to take pictures even though there was a fence and there were signs warning of the possible danger. Now and then in the fall someone would have to climb a tree to escape an irate bull elk.

That first summer I went home nearly every weekend and one of my parents would pick me up in Crescent City to drive me to Jedediah Smith. A Greyhound bus had a regular schedule along Highway 101 and I would stand out by the highway with my suitcase, waiting to flag it down. I think the other passengers were intrigued by the bus stopping to let me get on out in the middle of nowhere and doing the reverse on my return trips. Sometimes the bus would stop for fern pickers as well, pulling to the side of the narrow highway. I especially remember the fog on those winding drives where I knew it was hundreds of feet to the ocean and the driver was carefully making his way above the cliffs and through dense forests of redwoods.

The nearest town for purchasing groceries was Orick, about ten minutes away. Usually I could get a ride with one of the ranger’s wives when I needed to. One time one of the fellows suggested I cook for them because they could smell the stew I was fixing for myself. Nope, 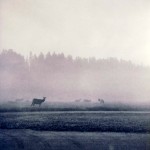 not my job. We did occasionally get together for refreshments and talk though. I learned a little bit about alcohol while I was there.

My second summer there was after my first year at Berkeley (as a Junior). By then my parents had moved to Turlock Lake in the Central Valley near Modesto. So I spent my days off at the park, usually taking at least one hike. The trip through the redwoods over to Gold Bluffs Beach and Fern Canyon at the coast was a favorite, four miles one way. (Fern Canyon was used as a backdrop for the movie Jurassic Park.) It’s interesting that filming was done there because I would not have been the least surprised to see a dinosaur poke its head up out of the ferns beneath those immense trees.

Few birds break the silence. The streams ripple along but otherwise it’s very still. I saw elk tracks but never did see an elk in the forest. They also like the beach area and I’d see tracks there. Once I saw a mink moving swiftly alongside a creek. Coming out of the redwoods into the meadow above the beach was a sensory adventure as the dark and quiet changed to brilliant light, the roar of waves and calls of seagulls.

Once I hiked to the beach with another seasonal so we could see the small whale that had washed up. It was the first whale I’d ever seen. There were trails along the creek and some on the other 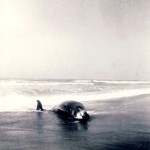 side of the highway, which is where the rangers’ houses were located.

Years later, having forgotten how far it was to the beach, I hiked there with my husband and daughter, who was an infant. By the time we got there she was hungry and we were tired. We were fortunate enough find another visitor willing to give us a ride back to the park entrance.

I enjoyed talking to visitors to the park. One time, when I was looking at the names of those who were camped there, I came across the name of a teacher I’d had in 8th grade at Castle Rock Elementary School in Castella—Mr. Erickson. It seemed as if it had to be him since the hometown was the town where he lived. Mr. Erickson had helped the students and the school by becoming a permanent substitute for a year, taking the place of a teacher who had been let go. I found the number of his campsite and stopped in for a short visit. He was there with his wife and family. I remember thinking how different he was as a husband and father versus how he’d seemed as a teacher.

Since then, of course, many things have changed, including the highway. Although still the same going past the park, the main highway is a freeway transporting people rapidly up and down the coast. It’s fortunate that much of the old highway remains for those who want to take their time. Prairie Creek State Park is now managed jointly by California Department of Parks and Recreation and the National Park Service.