I’ve spent time on what I call my “perch”, a board laid across several cement blocks overlooking the pond in the waterway behind our house. As the weather gets warmer the water le 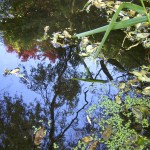 vel slowly drops and today it down at least 10 inches, no longer surrounding the twisted tree directly in front of my viewpoint and far enough down on the neighbor’s small bridge so that the ducks can swim under it although I’ve not seen them do that. The frogs are still singing at night although not with the same frenzied intensity as they used to and sound fewer in number.

Time alone outside, even in the suburb (or maybe especially in the suburbs?), is essential to our souls I think. Once seated behind the fence, eyes toward the water, stress flows out with the breeze. I’ve been there at different times of the day the last two weeks and usually not a lot happens. Tree branches sway, the water show some motion carrying leaves downstream—even to 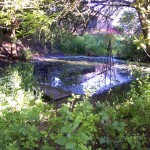 day (written two days ago) it is still moving although much more slowly. I can see the shadows of some birds that I can’t see through the foliage as they fly overhead.

And the same holds true for what I believe are Eastern Fox Squirrels, although sometimes debris they knock down in their travels is my first clue that they are coming. Sometimes one pauses right above me, perhaps three feet away, and stares. I usually hiss at them a bit since I don’t want them to become too tame. Two years ago my husband was trying to get one to eat from 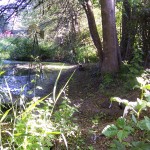 his hand and it became much too bold, approaching our neighbor so closely when she was gardening that she threw something at it. Another time it actually tried to climb up my husband’s leg, scratching through his jeans. That’s not friendly, it’s threatening!

Twice I’ve gotten to my bench only to find that I had startled the female Mallard and her young and she swiftly led them upstream. The first time I saw them they must have hatched quite recently and looked like ten little crumbled autumn leaves following in her wake. They travel in an obedient line, equal distances apart, as if connected by an invisible string. And on one occasion a pair of wood ducks splashed down at the far end to the pond, the female flapping her wings in the water, taking a thorough shower. I must have moved though because they flew almost immediately after I put binoculars up.

Yesterday I went out at 7 a.m. It was cool and now and then the breeze would pick up enough to make the windmill twirl around. If the wind is quite brisk it offers an occasional squeak. Seeing takes time. I can be drifting off into a meditative state and suddenly become aware of something not noticed when I first sat down. This time it was a native Western Gray Squirrel. I didn’t know we had any on this side of town and we’ve lived here about eight years. It moved into the dappled sunlight on the trunk of the weeping willow, its large, bushy tail being the fi 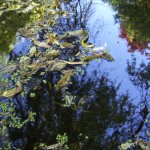 rst thing to attract my attention. It jumped to the ground from about two feet up the trunk, scampered 10-15 feet and then ran back and jumped on the trunk. This pattern was repeated a number of times. Sometimes it would jump and turn in mid-air, frisking about like a young colt or fawn. This was a first for me. Was it an adult enjoying the brisk morning as the sun started to come into the trees? A young one? It looked full- grown.

A robin hopped along the far bank and came to the edge of the water for a drink, then hopped away again. Black Capped Chickadees appear no matter what the time of day. I’m sure there is a nest not far away. They are in constant motion whether upside down or right-side up. A bright yellow swallow-tail butterfly flitted across the water.

This afternoon there were just the chickadees. Then a female Mallard duck walked out onto the bridge. She stood, and stood, and stood sometimes moving just her head. I thought perhaps she had young ones nearby but didn’t see any. I was getting cramps in my arms from holding the binoculars and lowered them but it didn’t spook her. Finally she took a few steps more, stopped once again, and then jumped into the water and swam to the far end of the pond. When I left about 20 minutes later she was still there. I’m assuming this is not the mother of the ducklings.

Just as I stood up to leave a female black-headed grosbeak flew swiftly from downstream, perched for a second on a branch, then continued upstream. She flew with such purpose I’m sure there must be a nest in our general area.

Invasive species are a big problem in the Willamette Valley and my pond is no stranger to some of them. Yellow Flag Iris, a perennial, grows in wetland areas and I can see some of these plants from my perch. They can grow up to five feet tall tall and are toxic to humans and animals. The plants spread by broken stem fragments and seeds. 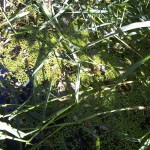 Duckweed covers some parts of the waterway although only peripherally in my viewing area. It doesn’t have leaves or stems but has oval-shaped fronds, each leaf having a slender
root. Mallard ducklings eat it but adults do not. Duckweed grows on slow moving water and can form dense mats that can cover the whole surface of a pond, depleting oxygen. Amazingly enough it contains more protein than do soybeans and grows rapidly in water with high nutrient levels. They can remove nitrogen and phosphates from water. In the Everglades, where agricultural pollution has entered the water, duckweed proliferates, displacing native species such as sawgrass that thrive in a low-nutrient environment. (Wikipedia).

And there is a tall grass here that thrives in wet places and is almost impossible to eliminate.

Last night and most of this morning we received quite a rainfall. I just walked over to the pond to observe the water level. What a difference a day makes! The pond has risen again as high as the blazed tree trunk and up nearly to the top of the bridge. The large pipe, on the opposite side of the creek, that feeds runoff into the waterway is half full of water. But the best part was the pond shining silver in the dim light from the cloud-filled sky. Droplets fell from 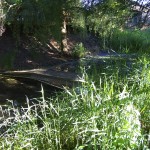 overhanging trees, spreading expanding ripples on the surface. A pair of mallards tipped head down into the water and paddled rapidly about as if excited by all the fresh food and the widened feeding area. I didn’t see any ducklings so am assuming this is a different pair while, at the same time, secretly hoping nothing has happened to the young ones. I am happy about the rainfall not only for the benefit of the ducks but also because this means that the pond will be present longer than I expected.

It’s such a treat to have a peace perch just beyond the back yard.

Addendum: This evening I saw the female Mallard and all 10 ducklings. She led them over the top of one end of the bridge to get to the upper pond area. 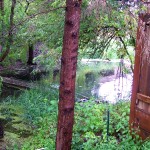