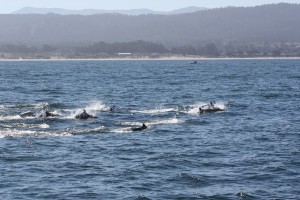 Last weekend we had the opportunity to go out on Monterey Bay,  and slightly beyond the bay, on the good ship Star of Monterey. We were part of an excursion under the leadership of Doug, Gail and Ted Cheeseman who run Cheeseman’s Ecology Safaris. Our Safari was just this one wonderful day but trips are available from the Arctic to Tanzania. Doug and I were seasonal ranger-naturalists at Crater Lake in 1961 and hadn’t seen each other since. What a great place to catch up on 51 years!

Our first sea mammals seen were sea otters, those delightful creatures that spend most of their lives near kelp, and that will sometimes use a rock to crack open a shelled prey. Next were the numerous sea lions sprawled on the rocks with cormorants, large, black, long-necked birds, standing nearby. A Brown Pelican perched on the rail of the dock as we were leaving and was there to welcome us upon our return. The sea was rough so I was glad I’d taken a pill the night before as well as that morning. Best to be prepared.

Other birds seen during the day included two kinds of shearwaters, several kinds of gulls and a pair of albatrosses–they have a wingspread of about six feet and resemble nothing so much as gliders, seldom flapping their wings. An albatross goes to sea as a youngster and may not touch land again until breeding season five years later! Now and then someone would toss small pieces of fish behind our boat and we were followed by an eager flight of gulls and Brown Pelicans  most of the trip. Still other birds seen were auklets, grebes, a loon, a scoter, phalaropes, jaegers,and murres. And probably some that I missed.

At one point the boat speeded up to get to a new area. I stayed outside the whole day to make sure I was focused on the trip and had a brisk breeze in my face–helps keep the stomach calm. During this stretch my fingers were curled tightly around the outside of the rail, my legs dancing in time to the large swells  of the sea, and I was really focused—on maintaining my balance!!!

The submarine Monterey Canyon is 50 miles long and 8,000 fee deep in the deepest areas. ” The Carmel Canyon parallels the coast south of Monterey Canyon.” These areas bring cold, highly oxygenated upwellings that support large quantities of nutrients so sea birds and animals are likely to be found here. We had hoped to see whales but whale sightings have been scarce this month. We did, however, find a large pod of dolphins, at least 100 and were able to follow them for half an hour or more. What a joyous  gathering! Or so it appeared to me. They swam right next to the boat, in front of the boat, a hundred yards from the boat, all the while arching up and diving down sometimes with four  or more in unison. Needless to say, cameras were clicking. When I downloaded mine I discovered that their speed exceeded my click reaction time more often than not.

Being outdoors in the mountains or on the sea doesn’t guarantee that you will see something dramatic. In this case being in the midst of dolphins more than made up for any of the down times. And when nothing exciting is happening you have many people with similar interests to talk to. Usually these conversations were interrupted by “Oh, look over there!” A great trip, from start to finish.