A loud, frightening roar woke me from a deep sleep—like the roar of a waterfall– and I sat upright in my tent. What? My rational mind clicked on and I thought it must be a cloudburst from a vi 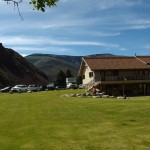 olent thunderstorm. But moonlight still shone along the side of the tent. Oh, great. The automatic sprinklers had gone on.

I could hear voices outside as others woke and tried to deal with whatever chaos this had caused in their lives. There were at least five tents scattered along the edge of the large lawn, most pitched next to shrubs that would give afternoon shade. We’d been told that the caretaker had been asked to turn the sprinklers off. Well, they were definitely on. I hurriedly unzipped the screen and rainfly, grabbed my boots and large duffle bag that I’d left outside and tossed them, drippin 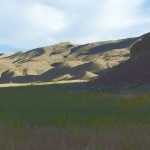 g, toward the back of the tent.

Snuggling back down into my sleeping bag, I felt secure in the knowledge that I was dry as long as I didn’t open the doors again. But it was hard to try to go back to sleep with that ch-ch-ch sound followed by a light spray and then a thunderous roar as the larger spray hit. After about an hour I felt dampness on my pajamas. Yikes! Water had apparently pooled on my ground-cloth, seeped through the floor, seeped through the three inch foam pad (extra material my husband had brought to maybe add to the trailer mattress but turning into a luxury item for me in my backpacking tent), and through my sleeping bag. I‘d brought a self-inflating pad since I wasn’t sure about the foam and it was rolled up nearby, so I stretched it out, put it under my sleeping bag and finally went back to sleep. 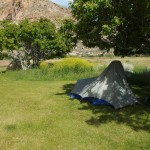 In February I’d signed up for a plant survey with Great Old Broads for Wilderness, an organization I joined two years ago. I’ve not worked on any projects with the group although I’ve helped staff an information table at some events.

Great Old Broads for Wilderness is a national organization that engages and ignites the activism of elders to preserve and protect wilderness and wild lands. Conceived by older women who love wilderness, Broads gives voice to the millions of older Americans who want to protect their public lands as Wilderness for this and future generations. We bring knowledge, commitment, and humor to the movement to protect our last wild places on earth.

We’d taken a couple of days to get to this staging area, about 18 miles from the little town of Challis, Idaho where my husband would be staying in an RV park in our 17-foot Casita trailer. He had joined us for the first evening happy hour and meal and would join us again in the middle of the week for a hike and dinner.

We volunteers were staying at the Western Watershed Project’s Greenfire Preserve, located on the East Fork of the Salmon River. It is a 440-acr 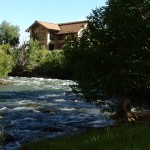 e parcel, formerly a homestead supporting cattle, being restored to its natural condition. The site has been named from Aldo Leopold’s essay Thinking Like a Mountain, in which he writes about shooting a wolf and watching the “the fierce green fire dying in her eyes”. Today it is an education center where people can learn about properly functioning habitat, attend seminars, and where other gatherings can take place such as research projects and conferences. The elevation here is about 4500 feet. There is no snow though and very little rain. Elk, deer, coyotes and even wolves frequent the area in winter.

Some beds were available, each room with a shower, but a number of us had opted for tents outdoors with the sound of the river to lull us to sleep. Many GOB projects take place under more primitive conditions with campfire cooking and porta-potties, so this seemed somewhat luxurious.

Dinners and breakfasts were provided but we supplied our own lunches. I’d brought a package of bagels, some fruit, and salami—my lunch every day for five days. Water bottles were also a necessity since this was high desert and the days were warm. Coffee was ready at 6:30, breakfast at 7:00, happy hour 5:30 p.m., dinner at 6:00 or 6:30. Sometimes there were discussions about the project after dinner, with most heading for bed soon thereafter although a few stayed up late having deep conversations. I was not one of those.

At 8:00 the morning after our dousing, we were loaded up and starting out on our first project. We would be surveying plants in sage grouse habitat and watching for any adverse grazing effects.