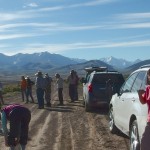 First day of volunteering! Breakfast was tasty but I soon learned I needed to eat much more on succeeding days in order to have enough energy for the job. Coffee was camp coffee made in a very large pan. We put a small strainer over our cups to filter out the grounds, sometimes a cooperative effort. Donna was leading a bird watch at 6:15 but I skipped that in order to get my sleeping bag and other damp items thrown over the clothesline to dry. I put the foam pad on a bench on one of the porches hoping the heat of the day would dry it. After breakfast I put together my lunch and filled my water jug. We loaded up at 8:00.

Donna was driving her car to the site as were several others. The first half of the day would be devoted to teaching us how to do the surveys. The road was very dusty and bumpy, winding through rolling hills of sage. We drove probably 15 miles to get to the site, then parked and walked off into open sage (foolishly I left my water jug in the car). We learned how to run four different kinds of transects. I worked with three others using the Daubenmire frame, a plastic rec 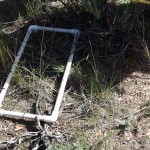 tangle that we put down alongside our 50 foot-tape every 2 meters. Within that frame we estimated the percent of each of the kinds of plants (most new to me), the amount of bare soils, rocks, gravel and litter as well as measuring the height of the tallest grass, forb, and shrub (nearly always sage). There was a lot kneeling down and standing up. It was quite hot by lunchtime when we made our way back to the cars –and my wonderful jug of water. I was grateful for someone letting me drink from one of their water bottles out in the field. We saw a golden eagle fly over where we were working.

After lunch we drove to another site—also dusty and bumpy. Here we did the same projects but mostly on our own. This time I took my water jug! From here there was a lovely view of the Lost River Mountains off in the distance (top photo). Some had snow on them. The tallest mountain in Idaho is a part of this range, Borah Peak, elevation 12,662 feet. 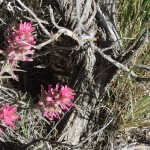 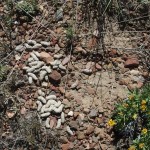 We were going back toward the cars to head home when I stumbled across some pellets on the ground. I knew they weren’t elk although there were plenty of elk droppings among the sage. And I was sure they weren’t deer. Our leader told me they were sage grouse! I was so proud of myself! : ) Proof of the existence of the bird. Of course I took a picture.

As we were driving out we saw a nighthawk huddled down on top of a fencepost. Usually seen during the evening hours this one was perched in broad daylight. Such a funny face it has. 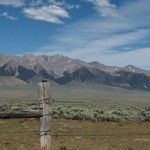 d had picked up and was quite strong at our last site and I began to worry about the things I’d left on the clothesline. The wind blew a lot most of the time we were in Idaho and I was thankful my husband had insisted on using large pegs on my tent instead of my backpacking pegs. When we got back I rushed to the clothesline to see whether my belongings were still there. They weren’t. I peered over the steep bank down to the river and couldn’t see anything there. Others were also concerned about their belongings. It turned out that one of the Great Old Broads who had been cooking our meals came out and rescued our things as the wind whipped through and had put them in a downstairs recreation room. Whew! I carried the foam pad out into the sunlight, took a quick shower, and went upstairs for happy hour. Dinner was spaghetti with the sauce including portobello mushrooms that someone had brought, French bread, and salad. I noticed that food had risen to a prime position in my value system.

Before going to bed I sat outside the tent in my folding chair. At 9 p.m. it was still light enough to write in my journal.

********************************************************************************
I knew nothing about sage grouse before I came to Idaho to work on this volunteer project. But I’ve learned a lot. I knew only that the males puff themselves up and strut about in an area called a lec, to attract and breed with the females. Lecs are returned to year after year. They don’t have to be large but may be as large as 40 acres, depending on the number of males present. Lecs need to be in an area where females are willing to nest. The females prefer sites with some tall sagebrush and dense grass. Sage grouse need large landscapes, sometimes more than 230 square miles although if all their seasonal needs are nearby they don’t need as much acreage. The birds don’t fly much but walk and take short flights. They thrive with lecs that are surrounded by lands with less than 14 percent development. Also, a study in eastern Oregon showed that leks will not be established if conifer cover is more than 4 percent.

After hatching, the young are taken to upland sites that are more open and have a mix of sagebrush, grasses and forbes (they eat insects on the forbes). A study in Oregon found sage grouse chicks ate 34 genera of forbs and 41 families of invertebrates. The chicks particularly favor ants and beetles.. Info from the Sage Grouse Initiative. Clutch size is six to 10 eggs and those laid earlier in the season are more numerous than those laid later.

In summer they look for areas with more moisture–wetlands, irrigated areas, farm lands, or sage patches that have recently burned. In the fall they move toward their winter range, finding places with less snow and lots of sagebrush for food and shelter. In winter they eat sagebrush leaves. Sagebrush, which also provides shelter, must cover 10-40 percent of the habitat.

In the high desert sagebrush areas, cattle are often found on grazing allotments on Bureau of Reclamation (BLM) lands. Usually ranchers use these allotments so they can grow alfalfa on their private land for winter food for their stock. These dry lands require many acres to support livestock. For the sage grouse this can sometimes be a habitat problem. In addition, the grouse don’t do well with fences, and mortalities are common when a bird flies into an unseen fence. According to the Idaho Department of Fish and Game, grouse collisions occur at “roughly one strike per mile of fence” and are particularly common during the breeding season. Placing wooden posts between segments no more than four yards long is helpful.

“Marking fences reduced collisions by 83%.” Fences in the study were marked with vinyl undersill that included reflective metallic tape. Collisions still occurred if the fences were closer than 1.2 miles from an active lec.

Although there has been concern that populations were receding, cooperative efforts between ranchers, government agencies and others are believed to be sufficient to stabilize and/or grow the numbers of these interesting birds.