All of this traveling about, catching airplanes, renting cars, staying in motels and dining in restaurants basically on my own was new to me. Even more stimulating was studying agendas, asking questions of staff, helping make important decisions. This was a time when non-point sources were being looked at, when erosion from logging operations was being examined, and when cease and desist orders were applied to small communities for sewerage discharges so that they qualified for state assistance in funding for treatment plants. So much learning to be done, so much protection for the waters of the state. And when I first got appointed to the board there were no other women on the board although that was soon to change. At the time I was a registered Republican and was appointed by Democratic governor Jerry Brown. 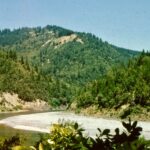 On a late June Wednesday I drove to Crescent City, leaving Weaverville around 10:45. I ate a sack lunch at Prairie Creek Redwoods State Park and had three chipmunks and a Steller’s Jay begging for food. Got to Smith River just before 4:00, changed and went to the meeting. 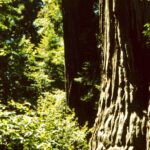 After the meeting we adjourned to David Joseph’s room for drinks, went on to the dining room and had a delicious salmon dinner. We were out in the buffet area, because we needed a bigger table but we were pretty noisy so it probably helped that too. From there we went on up to the bar and tried to talk over the loud music of the singer; including an argument over Proposition 15. (Proposition 15 called for more stringent legislative regulation of the nuclear power industry. It was defeated.)

The next day’s hearings were quite interesting- we’d just started getting into the best one when the CDF man, who was testifying, had some sort of attack and fell to the floor on his back. My first thought was “I hope somebody besides me knows CPR.” I headed for him, feeling obligated because of my recent class. The room rapidly emptied as a couple of board staff people and I went to his aid. He’d bitten his tongue badly and was twitching quite a bit either from heart pain or epilepsy perhaps. Fortunately someone else took charge and all I had to do was put a folded tablet in his mouth when asked to do so. An ambulance was called and motel staff brought in oxygen.

That hearing was postponed. We were through by around 3:00. I left. Got gas and drove down the Northbank Road where we’d all agreed to meet for dinner at Jedediah Smith State Park. Most of the staff members were camped there with their families. I found the Kor’s camp and left my car and walked down to the river. Swam a little, floated on my back looking up at the redwoods. Baked in the sun.

Fortunately someone had purchased a steak for me, which I later paid for. I thought I might end up eating salami, which I had with me. We had a good time talking and laughing a lot. Got back to the motel about 10:30.

“I haven’t laughed as much as on this trip in ages.”

Friday we drove to Klamath and took the jet boat trip up the river to view the river’s edge and the mouths of streams running into the Klamath River. It was interesting but I wouldn’t do it again.Everything has been cut over. It has grown back but mostly to hardwoods. Every small stream had a huge deposit of gravel at its mouth with the stream coming in a little trickle off to one side. We did see osprey and their nests, hooded mergansers, Indian fishing nets (gill nets) off to the edge and many blue herons. I’ve never seen so many kingfishers before. 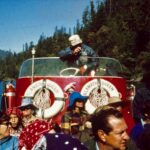 The boatman pointed out each and every summer home along the way. He also told us of a logging company that opens up a road for the fishermen every year by filling in a stream-bed and every winter the creek washes it out.

I got back to Weaverville around 6:30 and ate dinner at Florence and Leonard’s. Florence had saved some food for me. Bob was on his way out to the ranch but stopped for a few minutes. 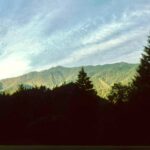 Saturday Rebecca and Jeffrey were due at the Meyer’s for Anne Marie’s birthday party. We bought groceries, presents, etc. and I cleaned the bathroom. Then dropped them off on our way out of town a little after 2:00. When Clarke and I got to the creek Bob didn’t know what time it was, around 4:00, and hadn’t had lunch. Sunday Clarke and I drove into town to pick up Rebecca and Jeff and were back by noon.

Bob took Monday off so he could get some more work done down at the creek. I’ve been putting in long days and my muscles aren’t used to it. Monday I mowed the lawn. I’ve mowed the orchard twice already this summer. Yesterday I cut up two sections of firewood (Jeff loaded most if it and brought it down). Cleaned under the stairs, which took several hours and cleaned out the children’s part of the corner cupboard. Washed the outside and inside of one window. Monday I also cut the new linoleum for the bathroom, which took all morning. It needs to be fastened down now.

Bob has the two cross pieces in place between the I-beams and the middle one in place but not yet welded. It’s very slow work. He has borrowed Scoot Miller’s welder. He is going to stay in town tonight and go to Bakersfield tomorrow. He’ll be back Friday night. Saturday is our backpack trip with the Fields.

The garden is having its usual problems with bugs, mice and birds. Maybe next year I’ll skip it.