Friday, July 2nd, Candie, Jim and Carin arrived in Weaverville a little after 9 p.m. I’d spent the day running all over getting stuff for the pack trip, etc. Also vacuumed most of the house. I had all the food ready before dinner time. Bob had flown with Lonny to Bakersfield Friday morning and got back about 7:30. 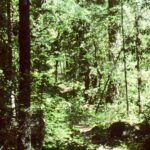 Saturday morning we drove to Big French Creek and were at the trailhead by 9:00. It was a partly cloudy day but mostly sunny. The kids traveled right along. We stopped for a snack at Oak Flat around 10:00. Someone had camped there since we were last there—had leveled off a place for their sleeping bag and left two blackened stone fireplaces. We got to Cherry Flat around 11:30 and it seemed to be just what we were looking for. 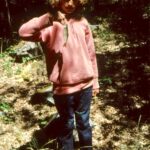 The camp is only about 30 feet off the main trail but since there’s no one else around it’s o.k. It’s covered with mossy -trunked oaks with an understory of poison oak and grass clumps. There are some Douglas Firs among the oaks. There is an established camp here with log rails, good for sitting on, and a small table- like structure suitable for kitchen use. Two areas are marked off as sleeping places, someone having taken thick chunks of moss from the trees or rocks (boulders here are moss covered) and put them on the ground for mattresses. Buckthorn Creek, which crosses the main trail just before the camp, is about 150 from here and Big French Creek about 100 yards. A small trail to Big French Creek leads to a nice pool near the mouth of Buckhorn Creek where the water is deep enough to swim a few feet—also very cold. All along the creek are large clumps of Indian Rhubarb, vine maple, alders, etc; a few tiger lilies and five-finger ferns.

We ate lunch at the pool and got briefly into the water. Bob went fishing. He got back around 6:00 with a limit of fish, having gone clear up to Willow Gulch. We ate macaroni and cheese, bread, fish, and chocolate pudding for dinner. As soon as the sun went down the mosquitoes moved in. It was very uncomfortable eating dinner. Candie and I got the dishes washed and dried. Bob played his harmonica and Jeff and Clarke stood up in their sleeping bags and swayed, bounced, and danced to the music, like two small elves or caterpillars with their hoods pulled up. Later I heard Bob and Jim singing after I’d gone to bed.

Slept off and on. In order to keep the mosquitoes out I had to have my hood zipped up. Then I sweated. Didn’t sleep much. Everyone else seemed to though.

Sunday morning of the 4th we sang Happy Birthday America, still lying in our sleeping bags—everyone except Jim who had gotten up early to go fishing. Bob was still more or less asleep.

We had hot instant cereal for breakfast, Tang and hot chocolate. I had coffee. I fixed a lunch for Bob and Jeff and they went upstream to fish. They aren’t back yet. 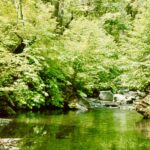 On the flat here there are a bunch of mountain mahogany trees out in the open, looking for all the world like a stunted orchard. We’re wondering if someone thought they were cherry trees and named the flat Cherry Flat for that reason. Lots of thrushes singing last evening. I called them hermit thrushes but am thinking maybe they were Swainson’s thrushes. 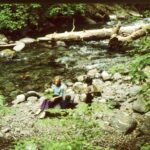 Bob and Jeff got back about 6:00 . I’d just started up the trail, hoping to meet them and did, just as I was going into the trees above the meadow. Jeffrey had caught 4 fish, his very first! The first one he caught was 10 inches long and the others smaller. Bob had caught 4 also and Jim 7 so we had fish with dinner again. Fortunately there was a little spot of sunlight left and I took several pictures of Jeff. He was really pleased with himself. It was good to see. Bob said they hadn’t pushed things too much, fooled around some and left when Jeff was ready to leave. 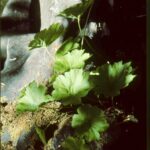 After dinner, when the kids were in bed they asked Bob to play his harmonica for them and pretty soon Rebecca, who had been playing her recorder, and he played some together. Then we all beat on plates and cups; Candie played the spoons and we sang some. Made a lot of noise. The mosquitoes weren’t quite as bad, maybe because it was a little cooler. Candie suggested that our noise drove then away as we celebrated the Bicentennial. Finally, around 10, things settled down. 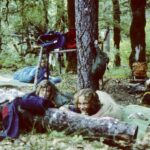 We had just settled down again when there was a horrible noise downstream a little way—a rather high-pitched scream followed by a lower snarling noise, very loud. We jumped—all we adults—and called back and forth in the dark, deciding it was a mountain lion. Bob and Jim moved Jeff and Clarke to between Bob and myself so if they had to get up it would hopefully wake us up and no one would wander off into the woods. The two girls were between some logs and also were not inclined to have to get up in the night to pee. It took a long time to go to sleep after that. I finally adjusted my bag so my ears were out so I could hear kids or cat!

The next morning I got up around 6:30 and headed up the trail. I went for about 45 minutes before I turned back. I passed two Shasta Lilies as tall as I am, very fragrant. The trail pitched steeply upward and came out through a rocky meadow area, green grass under oaks and dried grass in the open. The trail was very narrow and where it first emerged from the trees came out on a rocky point. I went to the edge and cautiously looked down, probably two or three hundred feet. It’s really a very wild place, steep, rugged and isolated. I found tracks in the dust about four inches across on this stretch of trail—perhaps mountain lion. This plus the sounds the night before made it seem even wilder. The sun was on Thurston Peaks, which I could just glimpse from this point, far ahead. Then I turned back. Got back to camp a little after 8:00.

Carin wasn’t feeling well and didn’t eat breakfast. Bob took Rebecca fishing. (Jim loaned her his pole). And they were to be gone only an hour. They didn’t have a watch but it was 11:30 before they got back. Rebecca had caught her first fish though. While they were gone I had taken camp down. Jeff helped fold up ground cloths. I had everything packed but Bob’s pack. Carin by now had a pretty high fever so Jim started out carrying her on his shoulders as well as carrying his pack. Candie followed him closely. Jeffrey and Clarke took off so I tried to catch up with them and did so where the trail gets narrow. Bob and Rebecca caught up with us at Oak Flat. We passed a young man coming in and Bob had met two people the day before, way up near Willow Gulch—they intended to get to Caribou Lakes—supposedly had enough food for three weeks). Other than that we saw no one else. 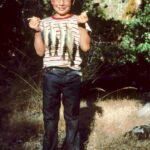 We caught up with Candie, Carin and Jim at Deep Creek. They’d been there about half an hour cooling Carin off. We ate lunch there and headed for the car. A short way down the road from the trailhead was a little creek and we stopped there for drinks (very hot day) and to cool Carin again. When we got to town Candie put her in the tub. They left around 5:30.