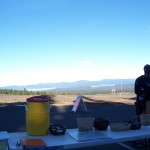 My view early in the day.

We got up at 6:00 a.m. and had hot cereal for breakfast. Tom gave me a ride to park headquarters where I ended up being the only passenger on a bus heading up the hill to the North Junction, with a quick drive-by at Rim Village in case there were others there needing a ride. 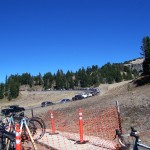 Bike corral and parking along road.

My driver told me he drives trolleys at Crater Lake during the summer but, now that school has started, he drives school buses in the Klamath area. I asked him whether he had discipline problems with kids and he told me how he handles those possibilities. These days school buses have cameras that help with that. And it sounds as if bus-driver attitude is important too.

There were already people biking the road between park headquarters and the North Junction. It was cold, no sunlight yet, and there was a mile-and-a-half of gravel road. No shoulders on this highway so bikers had to squeeze into just a few inches of pavement when the bus went by. My driver was saying, out loud, “Move over, move over, move over!” 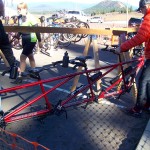 From the time I got to the station until noon I didn’t sit down. I was the only member of Friends of Crater Lake at our station. The others were with Discover Klamath, associated with the Chamber of Commerce. They were in charge of registration and various issues. There was no charge to participate but they wanted to keep track of how many people rode, where they were from, etc. I did refilling of Clif Bars and Goo, oranges and bananas. Also helped with giving people tickets to put bikes in the valet corral. One ticket they kept and one got stuck onto their bike. This allowed us to make sure no one took the wrong bike. Some put their bikes there while they went to find parking. Some took the bus back down to park headquarters where they’d left their vehicle and then drove up to get their bike. I don’t know how many boxes of Clif products I opened but it was hard on my fingers! 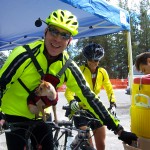 It was really cold at first, although most of the snow had melted—I had four or five layers on. When the sun finally hit our spot I peeled them off: jacket, down vest, etc. I was glad I’d brought sun screen because I’d left my sun hat in the trailer and, although my knit cap kept my head warm in the early hours, it didn’t do a lot as a sun shelter. We had a beautiful, warm day. Such a contrast to the day before when we drove through rain and fog. 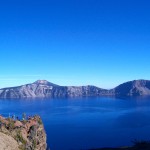 This was an enjoyable job though. It was nice to see so many smiling faces. It was during this time I came to see how many of the riders belong to biking groups and bike often. That’s why they were in such good biking shape (versus my sporadic rides). A group from Sacramento goes to 5,000 feet fairly often to ride. There were all kinds of bikes, some quite expensive. And they varied from a unicycle (not sure how this person managed the hills!) to a bicycle built for four.

By mid-afternoon we were out of water and Clif bars and left with just oranges and bananas, which soon became just bananas. Finally more water arrived around 4:00 p.m. At one point a park ranger car, with red lights and siren, drove past us and up the road. Someone had fallen from his bike, broken his clavicle and gotten a lot of road scrapes. An ambulance was called. There was no way of communicating (this will be resolved next year) but 911 still worked from cell phones. Another person fell in the gravel area but we had disinfectant and band-aids which his traveling companion applied.

I took the 6:00 p.m. bus down, again the only rider, a different driver. Again there were bikes on this nine-mile stretch of road that had remained open to automobile traffic. Tom was waiting for me at the park headquarters aid station. I dropped off my Friends of Crater Lake vest at the ranger office. The couple volunteering there, the Woodleys, turned out to be related to the Goodyear family from Weaverville so we briefly talked about who we knew in common. I told them I was Facebook friends with Jan. Funny how you can be someplace and find these unexpected connections. 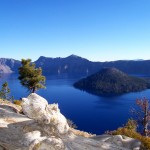 Tom got a late start riding but had gone from headquarters in the opposite direction. He rode past Vidae Falls and up to where he could see Crater Lake’s Phantom Ship, a craggy island with a ship-like shape. It’s about 500 by 200 feet in size and rises about 170 feet above the water. He said he needed to adjust his handlebars but enjoyed his ride.

When we got back to our campsite we discovered the refrigerator and the heater weren’t working. There wasn’t enough power from the trailer battery. It was cold and dark and we were tired and hungry. Tom hooked the trailer power to the car and ran the it for awhile so we had lights. We still had propane, of course, but it took power to start the heater to run on propane. I heated up soup (again thank goodness for having made that big pot of soup at home) and I put most of the food that was in the refrigerator outside in the bear-proof cabinet. Any leftover meat I put in the freezer compartment of the refrigerator. It was cold enough in the trailer so that might not have been necessary! Once again we were thankful for the big down comforter.

In the morning we stopped at the Mazama Resort restaurant for a good breakfast before we headed for home. One last treat awaited us though. On the way out, as we drove past the Crater Lake junction on the north side, a large bear ran across the road.