Bob and I spent Saturday night and Sunday at the ranch. The boys stayed with Linda Lindsey, and Rebecca at the Myers’. “We got a lot of communication accomplished.” He had been in New York the last week but was home by the time we got back from Nehalem on a Tuesday. After the time at the ranch he left for Bakersfield. I came down with a bad cold but the two older children were now being paid for extra jobs besides their usual chores so were a big help with dishes, etc. We were out at the ranch again. I did get two batches of laundry done.

The plums that formed on the wild plum tree were wrinkled and elongated and had turned brown. Mock orange, which had been in full bloom on the weekend, was fading.

“The children follow me like little shadows in and out and around the house. There have been some bare toes stepped on because I didn’t realize they were there. We’ve had some good times too though. This morning they were all pretending to be large mice, creeping down the stairs. I chased them with various things including once with a broom and once a brick of cheese.” 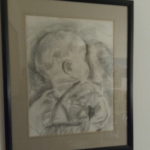 On Wednesday Betty Rourke came to visit, arriving about noon. We’d gone over and unlocked the gate for her earlier. She ate lunch with us and we walked up to the woods and back. She brought some books out for Rebecca and a balance number game. She left around 3:00 p.m. We packed quickly and left shortly thereafter. Got to town and bought gifts at Greenwood’s for Ann Marie—and also paid for frames for my pictures and took the framed pictures home—a sketch of Clarke I’d made in Marne Wilkins class when he was a baby and three pictures of plants. Dropped Rebecca and Jeff off at Myers’ where they spent the night, sleeping outside.

Thursday morning I took the VW bus down to Callahan’s and left it. Jeannie gave us a ride home. After lunch we walked down to get it. They said three valves were tight and it was a good thing we’d gotten the work done. We went to Brown’s for a snack, then to the store for groceries. By the time we got home it was five. I decided to go out to the ranch after dinner. Bob arrived though so I decided to wait to go out until the next day. Friday morning the children and I went to the ranch, stopping by to see Florence on the way. She gave us about half a gallon of raspberries. Bob didn’t get out there until nearly 10:00 that night.

Saturday morning Bob went up on the hill with the children to fly airplanes. Jeffrey seemed to be in one of his streaks of really needing fathering (all of them were, due to his absences but he seemed to need it the most right then). So Bob did a lot of holding. Candie, Jim and Carin arrived around 12:30. Bob and Jim put the pool up and the children played in it as it was filling. I fixed pizza for dinner and it was polished off. After dinner we sat around talking for quite a while and Jim told the children stories. It was very hot upstairs that night and children were restless.

We had pancakes for breakfast and a mixture of canned peaches and raspberries for fruit. Bob and Jim went down to the creek to work. We took lunch down later and did some playing with the children around the creek. They left around 4:30 and Bob about 6:00. He was going to Phoenix, Arizona to conduct a seminar. I was really missing him. He looked so tired the day before.

On Wednesday, July 3rd, Rebecca washed the dishes while I fixed a lunch. Then we drove down to White’s Bar Picnic Area and walked upstream a few hundred feet so we could have space to ourselves. Kinnik-Kinnick was with us and she had a marvelous time swimming and chasing grasshoppers in the sand. There were a lot of dead eels in the shallows so I maneuvered the children to where there weren’t any. The water was very deep and swift with very little shallow along the edges. It was a hot day but kind of fun. We had to move the lunch from the shade of a big boulder when we discovered a nest of black hornets on the boulder. After lunch we went to Big Bar where I bought $22 worth of groceries at the River Store, including four large boxes of matches. We were down to three matches. “Frank Walden told us that a man, who said he was a junk dealer, got quite belligerent with renters saying he could go anywhere he wanted, including on private land, because he was a junk collector. Apparently he came up our road yesterday. He hadn’t tampered with the gate but of course he could have had a USFS key. Frank had reported him to the sheriff’s office. “

Back at the ranch I drained and cleaned the pool. It was filling but I’d have to finish that in the morning. Bob called. He was back in town. He said his trip was really successful. I’d made fudge a couple of days before and the children and I finished that off– “perfect gluttons!”

“I’m a little calmer the last two evenings about “things that go bump in the night”. I don’t know why I get so nervous at night when Bob’s gone. Probably would be ok if I never read the newspapers! “ 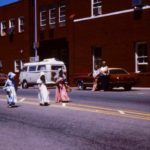 July 4th was a big rush. We got to town around 11:30 and picked up Rebecca’s dress and bonnet from Florence. Finally got up to the house. Oregon Street was blocked off because of the Joss House celebration. Rebecca fixed sandwiches while I hurriedly made big stitches in her dress, which was about two feet too long. Got her over to the CD Hall at about 12:45 where Anne Marie and Heidi were waiting. Then we went downtown to wait for the parade. I talked to Bev Forero for quite a while. Rebecca had been nervous before the parade but I think she was sort of being responsible for the other two girls during the parade. Later we found out they had won an award. Bob joined us just before the parade started. 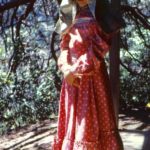 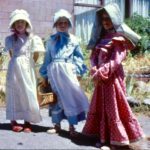 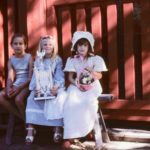 After the parade I took the children to the carnival while he put the boom on the boom truck and began unloading pipe. We spent a couple of hours at the carnival. Blew $13. Had two rides on the Ferris wheel, the children a couple of small children rides, and Jeffrey rode on a kind of scary big yellow disk. He looked so little and was the only passenger but he seemed to enjoy it thoroughly. Rebecca won a couple of dogs with a basketball toss. We got to the library at about 10 to 5 so only got a few books. Went home to check on Bob and then dropped Rebecca and Jeffrey off at Meyer’s. Clarke and I took gas cans to the service station and we went to the grocery store. Took the dress and bonnet back to Florence. Brought children home, including Ann Marie, fixed dinner. Clarke was so tired he was having hysterics so I put him in the tub to play while I washed dishes. Got him to bed and walked Ann Marie and Rebecca down to the road. They walked up to Moon Lee’s because Ann Marie’s parents were up there. Bob went out to the ranch at 9:30 to stay overnight. 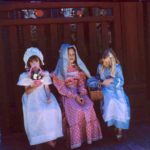 Sunday morning I ironed a bunch of Bob’s shirts, bought groceries, washed all four of our heads. Fixed a lunch and we went over to Ohde’s to eat it since I had to stop there to pick up a present Van Duyns had left for Rebecca—a big stuffed frog. We got to the ranch about 3:00 and Bob was just coming out. We talked for a while and then he left. Kevin Lewis, who is helping with the bridge, came out then so we waited until he passed to close the gate.

This blog is seldom philosophical but I hope reflects the pace, the richness as well as the chaos, of this period of time in our lives as captured in my journal. It’s not meant to be publishable, just a record.