This year I was making the trip to Nehalem with the children on my own. Bob decided, understandably, that he didn’t want to spend half of his two weeks of vacation every year going to see my parents. So this time I was going to take them on the train. I was nervous about the whole process. I’d never ridden a train before so was looking forward to that part, unless one counted the time, when I was about six years old, when my mother and two of my brothers and I rode “The Skunk” train from Willits, California to my oldest brother’s scout camp to visit him. I do remember riding on “The Skunk” and that we ate lunch at the camp. We were served Cool Aid with lunch, my first exposure to that, and the scouts told us it was bug juice. I sort of believed them. 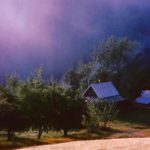 We were going on the train to Salem and then getting a rental car to drive the rest of the way to Nehalem. Bob had reserved the car for me and I had purchased the train tickets in Redding. I noted that I had taken paper for my journal with me for the visit but not once wrote on it while I was there.

The train left Redding in the middle of the night, and I suppose still does. It was 20 minutes late so was about 1 a.m. when we left, all of us quite excited. I’d driven to the station and left the car for our return since Bob had already left to go to Bakersfield and would be leaving for New York not long after we got back.

We weren’t able to sit together but were all in the same car. Clarke and Rebecca sat together as did Jeffrey and I. “The stars went rushing by and we whirred through a number of tunnels near Shasta Lake. It was light enough to see quite a bit just by starlight. Slowed way down going up the canyon. Seems to me I read that along this stretch there was heavy damage due to flooding this last year and that, although repairs had been made, the train must go only about 25 miles per hour. I could see the river and looking backward could often see cars curved out behind us and the engine ahead—like a big silver snake with a lighted head. Two boys in their early teens were in front of Jeffrey and me and one was especially restless, kept waking his companion and also running to the restroom all night. Rebecca and Jeff finally fell asleep around 2:30 or 3:00, Clarke earlier. It was daylight when we arrived in Klamath Falls about 5 a.m. and Rebecca awoke there, Jeffrey a little later, and we had to wake Clarke when it was time to get breakfast.

Sunrise was beautiful—pink and salmon clouds, mist rising on the swamps and on Klamath Lake, duck, pelicans and seagulls flying. Ours was a fairly quiet car, only a few children and some interesting characters among the adults. One couple, from New Jersey, sat one behind the other and, probably on purpose, conversed a great deal, read travelogues, etc. We had to wait a long time for breakfast and, at that, were served sooner than many having been given the #9. By the time I’d walked back five cars to the dining car and waited with all the cigarette smoke I wasn’t very hungry! The ride was quite bouncy.< When we finally got a table the waiter stood there drying wet silverware with a napkin, the silverware having apparently been dipped in dishwater recently but still containing food between the prongs of the forks. My enchantment with train travel started nose-diving. I sent back a couple of forks and would have sent the orange juice glasses but trusted in our health. We wound up over the mountains for a long time, past rhododendrons in bloom, patches of snow near Crescent Lake and down into Scotch Broom—very pretty. Arrived in Salem around noon. All of the railroad depots are so old: long high-backed benches and the one in Salem even had marble walls in the bathrooms, like some of the old buildings on the Berkeley campus. An employee called a cab for us and we soon arrived at the car rental place, just three blocks off Highway 22. We walked a block to a drive-in, after depositing our stuff at the car rental place -my suitcase, Rebecca’s suitcase and basket, Clarke’s little suitcase. Jeffrey had carried Rebecca’s duffel bag with lightweight sleeping bag and jackets. We ate lunch, walked back and had a hassle with the car rental agent who said he was sorry, but even though we’d reserved a compact car well in advance, he had none and we’d have to take a larger, more expensive car. (Bob later called their main office and we got it for compact rates) Remember there were no cell phones yet and I was a neophyte traveler functioning on basically no sleep!

Just outside of Salem everyone was falling apart. Rebecca was in tears because she wanted the front seat and Jeffrey was there (and she was exhausted); Clarke said his seatbelt was too tight and was sobbing, etc. I stopped, fixed Clarke’s belt; Jeff voluntarily traded places; got going with the air conditioner cooling the car and everyone promptly fell asleep! No one woke until we got to Tillamook. We got to Nehalem about 4 p.m. Stayed there Friday, Saturday and Sunday and left Monday. ‘We all slept well that first night!” 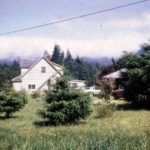 I was worried about both of my parents, my mother struggling with being in a wheelchair and paralyzed on one side, my dad with having to take care of her. He didn’t look well to me. He was still smoking and drinking too much wine but I’m sure it eased his stress. He wouldn’t leave her for a minute and she really wanted some time to herself I thought. And he needed some time to himself. We took a short walk up the road Friday, with my dad pushing the wheelchair and then I took the kids to the beach for a few hours. The children had a lot of fun. Being who I am I worried some about sneaker waves but they loved it and this year Clarke was much braver about incoming waves. 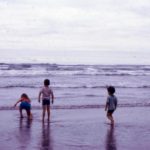 On Saturday we drove up the coast to another beach where my dad could get my mother down a paved path to where she could see and smell the ocean. He told me she later said, “I never thought I would see it again.” We’d gone there with them a long time before. There were caves worn in the bluffs and a stream made a smooth waterfall down to the sand. 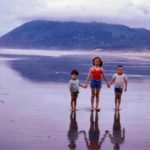 The children and I went a little way into one of the caves and climbed around outside a bit to look at a tide pool. “Suddenly Rebecca said, “Look at the water.” Where there had been sand below us there were now several inches of water. We scrambled down and got back to where there was dry sand. We were perfectly ok but easily might not have been with my having totally ignored the fact that the sand was wet there. “

At this beach, as at the previous one, there were thousands of little transparent fish in the water, borne in on each wave. They tickled our feet, tiny, soft things, scarcely an inch long. We scooped some up in an old milk carton to show my mother. That night I showed my parents a few slides. 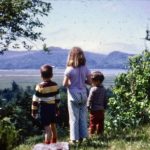 Sunday morning the children and I walked up to an old lookout place—very pretty and kind of a brush-lined, secret road going up. Coming back we went off the road into some brush, like a green-roofed world, little white flowers dancing around our feet. We tried to go to the beach again that afternoon but the wind was blowing the sand too hard and it stung. That evening we were expecting my brother Richard and his wife to join us for dinner and fed the children early. But they were late so my parents and I ate. I’d made a huckleberry pie from berries in their freezer. My brother didn’t arrive until 11 p.m. It was after midnight before we got to bed and then I couldn’t sleep because of an argument my brother and I had. He called it a discussion. I hadn’t seen them for three years. 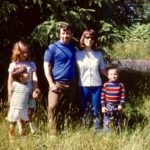 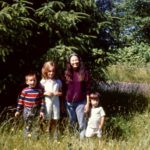 Monday we left at 1:00 and got to Salem at 4:00 where we learned that the train, due at 4:45, wouldn’t be in until 5:45. We walked downtown a little way and ate a lunch/dinner, sandwiches, at a restaurant called the Rooster Tail. No one else was eating then so the children could be undignified. The waitress had just finished teaching her first year of 2nd grade, and was very nice to them. We got back to the depot and had to wait until after 6:00. When we got on the train it turned out they’d had to disconnect a couple of cars so seats were at a minimum. They had only singles for us, which I didn’t like and Clarke liked even less. Then the porter took us to another car where Clarke and I could sit together, Jeffrey in front of me with a 14-year old boy, and Rebecca across from him with a very tolerant and mentally alert woman. Half an hour or less out of Salem the train hit a car. No injuries apparently but that took another half hour. North of Klamath Falls we went through a brilliant lightning storm—also saw along the way, where a freight train had derailed the week before. Finally got to Redding at 6 a.m. Three hours late. We ate breakfast in Redding and then drove home with me trying to keep my eyes open. Went to bed and slept for a couple of hours. 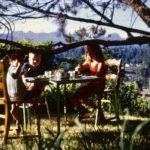