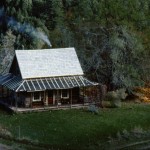 ves for the next 20 years. It was 1963. My spouse was finishing up a PhD and working at Stanford and I’d just finished my first year of teaching –grades 1-4 in a two-room school in Douglas City. I had a degree but no teaching credential. Before we met, he and his parents had done a lot on the place to clean it up as the building had been abandoned for many years. He’d also hired a couple, for a small stipend, to live there, continue the cleanup, and to maintain things while he finished school. The logs, with their dovetailed corners, were in good shape, although needing re-caulking. The roof and porch were in desperate need of repair.

The two-story cabin sat about a quarter of the way up a large meadow that faced toward the Trinity River canyon. Just above the house was an old orchard containing a variety of apple trees and an English walnut. Concord grapes formed a short hedge along one side and there was a pear tree and a small peach tree. I planted a garden in the center of the orchard where the former homesteaders had their garden. The 150-acre homestead had been accessed only by trail in the old days. The land was perched in the upper reaches of a steep-walled, forested canyon and the winding, narrow, four-mile road (which we had to maintain ourselves) was built when some timber harvests occurred.

There were two rooms, the upstairs and the downstairs. The narrow steps leading upstairs had dips worn into them from the wear of foot traffic of previous owners. You could tell there had once been at least three little rooms downstairs by marks left on the ceiling from the former walls. The cabin was about 14 feet by 28 feet. The ceiling of the downstairs was also the floor of the upstairs, just a single layer of wide boards allowing dirt to sift downward through the cracks. I swept daily and cleaned surfaces. An outhouse, a small metal building, was located up a short slope toward the orchard, about 50 feet away. At some point I painted the wooden inside part yellow and put contact paper on the walls, like wallpaper.

After those two weeks we began to work on the cabin. By July 5th Bob was tearing off one-half of the roof. I hauled and pushed 14-foot knotty-pine boards up to him and he nailed them down. Then we unrolled and tacked down black tar paper on top of that. It looked like a thunderstorm was coming so we really hurried. A few days later he tore off the back porch roof and I finished planting the garden. Working on the roof was extremely hot with the sun beating down. Putting insulation on the roof involved putting aluminum foil down, then the insulation –lots of heat reflected from the foil.

July 6th my in-laws gave us a big reception at their home and I was delighted to see some of my friends who hadn’t been able to make it to our small wedding (a wonderful affair hosted by my parents in their yard at Turlock Lake State Park where my dad was a ranger).

Bob built a little barbed-wire corral to hold two horses, which his parents were going to bring out for us to use. We would provide the grazing for the horses and give them some exercise until his parents needed them for a pack trip. I had absolutely no experience with horses and the idea of riding that high up on something that much stronger than I am wasn’t appealing, but if I were going to be part of this family I figured I needed to get used to it. Target and Flash arrived in late July. We rode them one evening up the hill a way. I rode Target, who was old and wore out going uphill. Flash was a mare—she followed Target all the time. She always tried to get rid of whoever rode her and would suddenly start backing up and spinning in a circle. Bob stayed on.

Nature notes: “I found two blue-tailed skinks and a whole batch of their eggs in the sand pile. “
“We have twisted stalk, an orchid, in the boggy place across the road.”

Bob graded the yard with a small John Deere tractor and put in pipes so that eventually we could have standpipes at all four corners of the house. Our water came from a spring up at the top of the meadow and pvc pipe had been laid in a ditch from there down to the house. We used an old bathtub for a settling tank to take care of most of the sand or sediment that might wash in from the spring and the tub had to be drained and cleaned periodically, a pleasant job on a warm day. It was really good water.

An old Monarch stove that had belonged to one of my mother-in-law’s uncles occupied one corner of the kitchen, accompanied by a small two-burner gas stove, and there was a gas refrigerator. Lights were kerosene lanterns unless the propane -operated generator was working. There was running water in the large sink but hot water came from small tanks inside the wood-burning Monarch stove. If I wanted to bake or to have hot water I had to build a fire in the stove.

The covered porch ran around all four sides of the cabin and we had a shower stall on the north porch, making the trip from shower to the front door during cold weather a stimulating experience! That summer, whenever we had company for a couple of days, the visiting was actually like a vacation, even with extra cooking. They would sleep in their tents on the lawn—which we’d also planted early in the year—and we didn’t have to work. Sometimes friends and/or family came out to help for a day. We had lots of support.

In the fall, we moved to Los Altos and Bob went back to working at Stanford while I enrolled at San Jose State to get a teaching credential. We finished putting cedar shakes on the main roof in September. I’d carry them up the stairs and out a window to wherever he was working, trip after trip. My memory says we still had the porch roofs to do but it was the main roof that was most important.

In late November the log bridge across the creek collapsed.
To be continued