One key log broke on the old log bridge and it collapsed. George Costa, an expert cat driver w 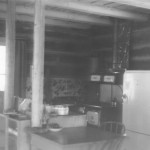 ho owned a mining claim along the river, was hired to clear it out, build a log culvert and put in dirt fill.

In February we backpacked in with friends, using the original trail. The road was deeply rutted at the lower end due to a combination of runoff from rain and snow. After the road was passable, Florence brought out many flowers from her yard and we planted pinks, tiger lilies, Shasta daisies, purple aster, columbine, etc. Most of the new orchard trees, that we planted a year ago February, were blooming as were the peach trees and the pear. Down at the creek Indian rhubarb and yellow violets were blossoming and fawn lilies along the road. There were no leaves on the oaks or maples yet but the maples were heavy with blossoms. Spring was in the air.

In June we were in the process of moving from Los Altos to the ranch. While still in Los Altos we purchased a green, jeep pickup and filled it with our few possessions. Our other vehicle was a VW beetle, which we left in Weaverville.

Bob began working on the road with the tractor, smoothing out the new fill area. Unfortunately most of the flowers we had planted died or were eaten by deer.

A few days later we drove to Big Bar to get gas for the tractor and I dropped him off on the way back so he could do some more work. Just before I got to the house, on the turn that required backing up to negotiate, the brakes gave out. I drove the rest of the way to the house, parked it, went inside and fixed a lunch, then walked down to the bottom of the road, using the trail. Together we ate lunch, then walked back to the house and drove the jeep into town, using only the emergency brake. The brake-fluid tube had snapped. We left it for repairs and borrowed a car to get home.

On our anniversary we drove out to Mt. Meadow Ranch and camped at Big Flat, elevation 5,000 feet. It’s a very pretty area with a big meadow on one side, spikey trees and mountains rising up on the other. It began to sprinkle while we unrolled sleeping bags and spread them out in the back of the truck. We ate dinner at the lodge and the rain held off until we were nearly back to camp. That night, it was very cold. The next morning we decided to not go to Caribou Lakes but to hike to Josephine Lake. This involved three miles of road and one of trail because it is private land although surrounded by wilderness. A caretaker showed us how to get get to the lake. After scrambling over rocks and through brush we finally crossed the saddle to the lake, small, long and narrow. Water was coming in from melting snow in the basin of cliffs. A large stream plunged over a waterfall about ten feet high and ran over clean, white sand for about 40 feet before entering the lake. We saw trout there. By 7:00 we were back at camp. After an even colder night and a collapsed air mattress (we turned the other one sideways for upper body padding) we fixed pancakes for breakfast and left– a day earlier than planned.

Bob began working for the phone company on the 22nd, leaving the house at 7:00 a.m. I began to establish a routine in his absence, usually taking a walk in the morning and then doing various chores. There were three outbuildings on the property, one a shed right next to the house, one a small woodshed and the third a small barn below the house that may have been used more for storage of equipment than a regular barn. The shed next to the house still had jars of canned goods – fruits and vegetables mostly. We cleaned that out and worked on organizing the barn space. He took apart the woodshed and stacked the pieces in the field for fall burning.

We bought a new (used) gas refrigerator that was larger than the old one and had a top door freezer. It was painted brown and looked much nicer than the white one. Some of my chores included putting black felt paper on the upper half of the upstairs end-walls to make things more airtight and I put wallpaper over that on one end. There was also pentaseal to put on the new back porch deck boards and on the ceiling and beams upstairs. I’d go into town on my own or ride in with Bob to do laundry and ironing at my in-laws. When they were gone for awhile I watered their garden and picked some raspberries for our use.

We purchased an old claw-footed bathtub to use for a settling tank below the spring and he dug a hole to put it in.

Nature notes: While working upstairs I brushed a mud dauber off of myself and it dropped a big spider. Looked it up and the book said they partially paralyze spiders to feed their 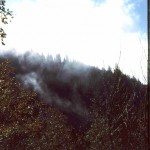 young in the mud cells. I knocked a nest off and discovered about three spiders in it—apparently of a related species. Large mottled bodies, red, yellow or white. Bob saw a fox and a bear when he was hiking on the old trail with Jim Barrett. We saw a big porcupine in one of the apple trees. Later it was out on the lawn eating clover.

The old woodshed had also been part of a chicken coop. We’d put sprinklers on the roof of the house recently when a huge thunderstorm came through and the area had gotten wet. Whew! What a smell I had to deal with while cleaning up debris! Plus there was a piece of fence running through it and the remains of a garbage dump with rusty cans.

Nature notes: For a time we were besieged by Steller’s jays calling all day and hopping around in the fields getting grasshoppers. Many black-headed grosbeaks with young ones plaintively calling to their parents appeared around that time as well.

The river canyon was filled with fog this morning (July 15) when we got up. Now and then we could see through to the lookout or under it to sun covered slopes across the river. When I walked up to the top of the meadow the fog was breaking up quite rapidly and tiptoeing into oblivion as it flowed over the mountaintops.

Bob began putting insulators on trees (which he first had to trim) and stringing #9 wire for a telephone line. He started from near the house with the end goal being down near the highway. After he got this done as far as the creek, he began stringing wire. I watched with the first tree to make sure it didn’t tangle while he pulled it. He tied a rope to the free end, pulled ‘till the rope hit the ground; climbed down; pulled the wire to the next tree; etc. This project was to take longer than expected.

We were going to make the area under the back porch into a little cellar/laundry room and Bob began building forms for pouring the floor. I cleared out ditches in the orchard so we could water the trees with overflow from the water supply. There was always something that needed working on.

Toward the end of July I received a teaching offer from Weaverville Elementary School but wanted to check in with the Big Bar school first as two other people and I had been interviewed early in the summer. Big Bar would also be closer.

August 2nd I learned that, starting in September, I would be teaching grades 1-5 at Cox Bar, a one-room elementary school, in Big Bar