When I was a child I would bring Monarch butterfly caterpillars into the house and raise them in a Mason jar. 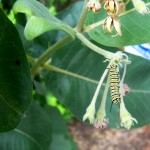 e done was put about an inch of dirt in the bottom of the jar and dampen it a bit. Then put in a short stalk of milkweed with enough leaves to last a couple of days, accompanied by the caterpillar. The finishing touch was wax paper across the top, fastened by a rubber band. And the very last job was to poke small holes in the wax paper so that air could circulate. It 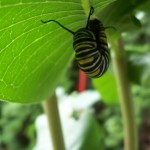 was important to keep fresh leaves for the caterpillars to feed upon. And if the interior got too yucky from caterpillar poops I’d take everything out and put in fresh dirt. 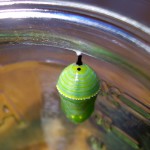 date growth) and start moving all over the jar looking for a place to put its chrysalis. Then it would make a silk button and, attaching its rear end to that button by a tiny spine, hang head down in a “J” shape for a couple of days. The skin would split and out would wriggle a smooth, cylindrical, chrysalis, drying to a lovely jade color decorated by a single line of golden dots. 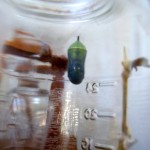 a week later the chrysalis would start turning dark
and I’d know it was getting time for hatching. The dark color
was actually the wings showing through the now transparent chrysalis. And then would come the emergence of the butterfly. 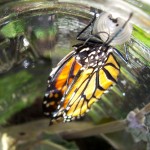 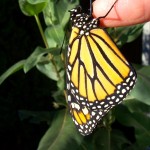 When my children were young I made sure they had that same magical experience.

The fourth generation of the Monarchs, usually emerging in September or October, doesn’t
remain in the area of hatching but begins 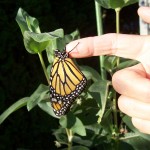 a long migration to Southern California or to Mexico where they will overwinter and start a new generation to return north. 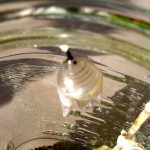 This morning I once again put my finger into a jar to have the delicate, long legs of a Monarch butterfly begin to crawl up to freedom. Right now the insect is in partial sun, resting on the
milkweed plant in the front yard, wings drying, fluids surging through its body. 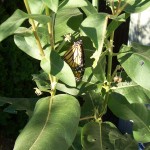 Soon it will take wing.