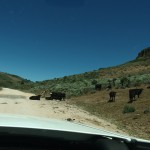 Sometimes it’s the unexpected in a trip that brings a memory and a smile. On our trip to Idaho we stayed one night at an RV park in Mountain Home. It was a pleasant stay—concrete pads, green lawns, clean restrooms—and we had made a reservation there for the return trip as well.

But leaving that first morning we took a wrong turn, getting on a different highway than the one we’d planned to take. So we chose an off-ramp, driving a narrow, but paved, road across the sagebrush flats heading in the general direction of the highway we wished to find. Soon we could see giant windmills dotting the landscape and as we got closer we became concerned that the road was simply access to these huge, white, three-bladed generators. No one else seemed to be going our direction. We stopped near a farmhouse, the only one we’d seen. With map in hand I went down the driveway to knock on the doors of both buildings. They looked as if they were being used by someone, but no one was home. A friendly border collie wandered over to sniff at my legs, tail slowly wagging. On the other side of the yard was a large, rounded garage, like a hanger, dark inside. Farm equipment—trailers, a small dozer and other tools meant this was definitely in use and I thought perhaps the dwellings were to house workers. Several horses neighed from a fenced enclosure. I called out but no one answered.

As I was heading back toward the driveway a vehicle drove quickly into the yard, pulling a utility trailer. The driver smiled as I walked over to ask for directions. But he shook his head and distinctly said, “I don’t speak English.” And I don’t speak Spanish. What to do? I can count to 10 so said, pointing to the map, “diez twice”? Of course I wasn’t making any sense at all to him. He pulled out a phone and talked rapidly in Spanish to someone, then handed me the work-worn instrument. The voice on the line, with an accent but very clear, told me that he would be there soon; he was on his way anyway. Whew, rescue potential!

The man’s arrival brought instant help. And he laughed when I told him about my “diez twice”. He told us that if we kept going we would climb up over a mountain and down the other side was the highway we sought. The road would turn into a dirt road near the top but it was a good road, he said, and was a pretty drive. Towing our trailer would be no problem although it might get a little dusty. He had cows grazing up there he explained. We thanked him and continued our journey. (mental note to self—take a Spanish class this fall. I took Latin in high school. Our language teacher, who taught Spanish and Latin, had a Swedish accent. My brothers took Spanish.)

It was a good drive. The road climbed up Bennett Mountain— bluffs made up of layers of lava appeared. Sagebrush covered the hillsides, and as promised, there were black Angus cattle along the way. Nearing the top we could see springs coming out from the base of the bluffs. Numbered birdhouses were attached to the posts of the wire fence and swallows seemed to be the main inhabitants. Now and then we pulled over to let a pickup pulling a horse trailer, or a larger truck go by, going down the way we had come up. As the area opened up a little more, there were rocky gulches supporting willows and aspen and there was more grass. 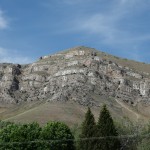 Across from the service station in Arco, Idaho

At the top it was quite pretty—there were conifers, either Douglas fir, hemlocks or spruce (cones hanging downward, not upward like a true fir), and much aspen. The scenery had an alpine appearance to the upper slopes, and as we descended we saw bluebirds using the birdhouses. Soon we reached Highway 20 (diez twice), which was lined with alfalfa fields, some with hay already baled, and by 4:30 we were in the little town of Arco where we stopped to get gas. A man, who used to live in Oregon, saw our license plate and walked over to chat for a minute. Next stop was Challis.