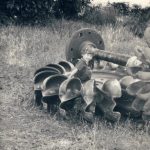 The “Junk Man” brought up 2 pelton wheels that Bob bought, with the long-range plan of putting them someplace in the creek and generating electricity. The larger one weighed about 2 tons. The other, though smaller, was even older. Both were cast iron. The cost was $50 for the big one plus $20 to haul it up to the ranch in a dump truck from Junction City. Bob had had to go down near the slide and take out some more dirt so they could get their truck around it.

When he brought them, around 7:30, Rebecca and I drove up by the orchard to watch the unloading process. I drove so we could watch from in the car, protected from all the mosquitoes. My notes indicate it was a bad mosquito year. When they dumped them out, between the first apple tree (a gravenstein) and the English walnut, the tailgate fell off their truck. Bob got the tractor and eventually they were able to get it back on.

A few odds and ends of information:
I discovered a greenback goldfinch nest in the maple tree, up near the top. I had heard the babies but thought it was some bird nesting in the orchard.

I got stung on my pregnant belly by a yellow jacket in the outhouse.

My mother called to say she couldn’t come down to help when the baby was born because her doctor said she was not well enough.

We moved into town toward the end of July to wait for our new arrival.
Our town home had a built-in phonograph and Bob was pleased to find that he still had some records stored in Florence & Leonard’s attic. He had thought maybe we’d given them away the Christmas where we gave everyone records (not a bad thing to do when you don’t have much money and want to give nice gifts!).

Rebecca and I discovered some Monarch Butterfly caterpillars on milkweed out in the backyard. 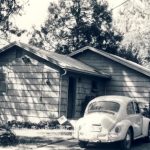 I did some cooking ahead—like making a double batch of chicken and freezing half, and making and freezing applesauce. Rebecca would be sleeping in an old iron-framed bed and I sanded some on that. I also made a little table and bench for her and painted them. Bob was still working on an article for the historical society and I typed up more of that. I kept cleaning things and doing laundry, worried that the baby would come and things would be unfinished. I enjoyed the flowers that Ruby had planted—gladiolas, roses. Hummingbirds fed from the silk tree flowers. We visited with Van Duyns, who were loaning us their bassinet.

“The water pressure got quite low and the water dirty. I walked up the hill to the reservoir. You can smell it from 50 feet away—not very appetizing. The pond looked dark and swampy, alders grow around it and there were frogs jumping in it.”

Let me describe our town water source. The water at the ranch came from a couple of clear, cold springs, running only a short distance before entering our waterlines. Here in Weaverville, our water came from West Weaver Creek via an open ditch, at least two miles long, that filled a pond a couple of hundred feet above our house and then continued from there around the hill where it provided water to other homes. Our intake from this pond was the lowest one so that, although we might not run out of water quite as soon as everyone else if the ditch sprang a leak, we got the thickest water.

There was a path all along the ditch and people walked and rode horses along this path. Our doctor, who lived further up the ridge, also got his water from this ditch and he told me one time, grinning, that it keeps you regular. We had slightly upset stomachs for the first six months and then no problem. Sometimes in the winter the ditch would spring a leak or would freeze and then volunteers would go fix it. Later on, Allen Young became the keeper of the ditch, He would hike the ditch and clear branches and reinforce various places. The excess water from the ditch ran down the hill a short distance into Allen and Bob Young’s duck pond along Oregon Street.

The ditch was called the Moon Lee Ditch. I think perhaps that Moon Lee, who was a well-known, longtime resident of Weaverville, had the water rights but don’t remember whether or not he received any funding for its use. If so perhaps that went to pay Allen to keep it up.

On the 19th of August we went to Kathleen Reagan’s wedding. When an usher politely asked when the baby was due and I said “last week” he quickly found a seat for me. The wedding was outdoors under a full moon.

About two weeks later, after buying jars for making pickles and getting cucumbers from Florence I decided to put the pickling off a day. That afternoon Bob wanted to talk to the USFS in Big Bar about Waldorff deeds but didn’t know whether I should go. I thought I might as well be down there counting minutes as at the house. So I wandered around with his watch and Rebecca while he was inside. At 5:30 we came home and I started dinner. By 7:00 it was time to call the hospital and they said to come in. I fed the two of them, had a few bites myself and then, since Florence and Leonard weren’t at home to take care of Rebecca, we called Austins. Jeffrey was born a few hours later. After a couple of days in the hospital we moved in with Florence and Leonard for several days and then moved to our own house.