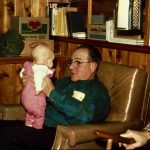 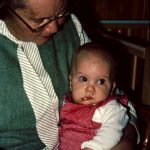 I’m struck, in reading these journals, by how diverse our lives were as we seemingly attempted to live about five lives in one—each. We were trying to earn a living (mostly Bob); maintain and build upon two residences; raise two small children; participate in community activities; make and enrich friendships; travel back and forth between the two properties; keep a food supply in both places; be part pioneer, part small town urban and very occasional big city dwellers. All of this would have been hard enough if everything went smoothly, but as we all know, there are frequent time-and-energy-consuming derailments in every life.

“Before Christmas (1967) we went to the Bay Area, two days after discovering we were out of water after a long cold spell. Bob got this straightened out at 6 o’clock the evening before we left (with Dave Ohde’s help). Doris took care of the kids that night while we went to a telephone company dinner.”

We stayed with friends in the Bay Area for a few days. One day I went with Bob and Ted to the college to feed some Indian grasshoppers that one of Ted’s graduate students was working with—studying the auditory nerves in connection with sounds the male makes to attract the female. The other days Bob went to campus every day with Ted and used the library. He also went to the USFS Experiment Station to talk about things they might need invented. I stayed in the house and Betsy and I did kid things—went to Mr. Mopp’s Toy and Book Store, took Sarah and Rebecca to a little park.

We came home by way of San Francisco so he could get some catalogs at Stacy’s and we stayed overnight in San Rafael with Barbara and Bruce Black. Bruce had been my boss at Crater Lake and we’d stayed in touch—actually was able to continue to see them after they retired here in Oregon in Corvallis. I was quite fond of them. They hadn’t changed a bit but their children were all teenagers and much different than when I’d known them at Crater Lake. 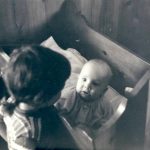 When we got to Weaverville we found about a foot of new snow on top of the other that was already there. Our driveway was blocked from snow plowed up by the plows. Bob walked up to the house and brought the truck down. We transferred children and luggage and made it back up the hill in 4-wheel drive. But there was no water until Bob could fix it the next morning. We spent Christmas visiting with various family members in town. January 8th we were out of water again. Bob hauled in jugs of water but by the 10th we’d moved in with Florence and Leonard and stayed several days. We’d had snow on the ground since November 29th.

On the 15th I wrote, “I’m so tired at night I ache–would love to go to bed earlier but can’t seem to. Stay awake during the day by keeping constantly busy and gulping coffee when I can. “

Bob finished his article for the Historical Society and the publication was printed. He was going to do the burglar alarm system for the new museum and was also staying up late drawing various house plans for additions to our house. Because we weren’t on an approved water system (we had a septic tank) we couldn’t build much at a time–also couldn’t because we couldn’t afford it. Moving with two children into a house occupied by a retired couple put a big strain on a small sewage system. We sometimes had a spring running down the gutter along the driveway. We were also trying to negotiate with our neighbors to put an underground line across their property to join the town system. We were right on the edge of the sewage district. He was also thinking about various things he could build in the electronic and laser fields as a sideline or go into full time. This also was keeping us up late.

I continued with the usual small children routine—breakfast, dishes, dressing Rebecca (who insisted on dressing herself), Jeff’s bath and food, etc. Painted the kitchen footstool and Rebecca’s box for standing on to reach the washbasin. By the 16th Bob could get in and out with the VW. By the 17th I could escape with the kids and go downtown to run errands, and go to Varney’s for doughnuts, coffee and lemonade, and go to the library.

“Johnson’s State of the Union message was on tonight—more interesting were the discussions (round-table variety, members of both parties) afterwards. Much discussion about Britain’s devaluation and whether we will lower the price of gold, etc. Also Viet Nam, of course. “

January 23rd-“Much of the news tonight was about North Korea’s capturing one of our “spy” ships. At the present time it looks as if the ship was in international waters. Reserve air force units are being called in.”

Bob went out to the ranch with Gene Miller to check on things. They walked in, kicking rocks out of the road.

While reading these words written so long ago, I’m reminded of how often my mother-in-law saved my life as a stressed-out parent of small children. She and Leonard were there for us when we ran out of water or had some emergency or just to take children for a few hours. One day in January, when we had a light snow, she called to ask whether I wanted to go for a walk with her. The children were down for their naps and Bob was home so of course I did! I drove the truck over and we took a brisk walk through falling snow up past Baglee’s and around by the powder house, about two inches of powder snow on ice further up. “It was very refreshing—the first walk I’ve taken in months just to be walking.” We stopped to see Aunt May in the hospital on the way back.

Two days later we got a foot of new powder snow. Bob and Wayne Lewis took the ski-do and tried to go up on Oregon Mt. to fix the microwave to Minersville but got bogged down. Bob brought Wayne home for lunch. We ran out of water again. A call to Moon Lee and he said he’d get someone working on it. Bob brought home five gallons of water so we could flush the toilet.

We had juncos, towhees, Stellars and scrub jays feeding on the porch. The next day a flock of varied thrushes showed up to eat orange berries on one of our bushes. The last day of January I saw a pair of sapsuckers and a nuthatch. 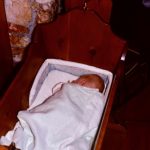 Horace Jones, whom I’ve said was wonderful with woodworking, had made a cradle for his daughter’s babies and we were able to use it with Jeff for a while. It was a work of art and dressed up whatever room it occupied. When a baby began to get close to sitting up though it could no longer be used or the occupant might rock right out of it. Each baby that used it had its name on the underneath. What a treasure for that family to have!

“The Korean situation still at pretty much of a stalemate. I often wonder what kind of world we’ve brought our children into. Thank goodness for living in the mountains—at least it offers rationality.”

After lunch on the 31st Bob took us downtown in the truck. He went to work and I took Rebecca and Jeff to Austin’s. Then I went to Florence and Leonard’s and did laundry and took a bath. Barbara gave Rebecca a bath. We picked up Bob and drove home He had chains on all four wheels and 4-wheel drive and still spun terribly. 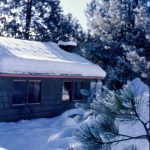 The next day Rebecca and I slid in the snow for awhile. The sun was shining and it was warm. I took the clothes basket and slid down the slope in front of the house into the garden. I broke the bottom out of the basket so I got Jeff’s plastic bathtub for her and I used a dishpan. “Fun”!