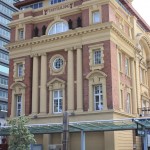 As the taxi pulled up to our house in the dark, I realized that yes, we were actually going to do this! We were going to New Zealand! This would be my first trip to another country except for a short trip to Cabo a number of years ago and a trip to Canada with family long before that. My husband traveled a lot when he was in the service following high school but this was to be our first trip together to another country.

Our November 2nd trip to New Zealand actually started 53 years ago when I began working at Crater Lake National Park as a Seasonal Ranger-Naturalist. As the only female uniformed staff person that summer I felt as if I had 30 brothers and, among them, three or four became good friends. They teased me as if I were a sibling. We’d take trips to other national parks and take hikes closer to home in our spare time. We all supported each other on the job. Doug was one of those seasonals and, although he wasn’t there my second season, we kept in touch off and on over the years.

Doug and his wife, Gail, and their son Ted run Cheeseman’s Safaris and Doug has often asked us to consider a trip someplace with them. Their own favorite spot is Tanzania while Ted loves Antarctica. Finally, last year, we made the plunge and reserved a place for this year’s trip to New Zealand with one of their trusted coworkers as our guide. This is the only country I’ve really wanted to visit.

We flew from Eugene to Portland to Los Angeles, (where we had a 9-hour layover) to Fiji to Auckland, New Zealand. It was a beautiful flight from Portland south. We were above the clouds for a while and then decided, when we saw lakes with dry shorelines, we were over drought-stricken California. Lake Tahoe was recognizable near mountains with a skim of snow. Then suddenly the clouds opened up and there was Yosemite and Half Dome! What a treat!

It was after 9:00 o’clock when we started the flight to Fiji and I gladly accepted the free glass of wine hoping it would help me sleep. Unlike most airlines these days, Fiji serves food and drink at no extra cost. And in Fiji we were greeted with a song, accompanied by guitars, as we walked into the warm, humid airport.

Our trip was scheduled around birds and mammals of New Zealand and we would be traveling with five other people in a 10-passenger van. When we reached the Auckland Airport we took a shuttle to our motel, about a mile from where our group was to meet. We had made reservations for a couple of days before the trip was to start, and for several days after completion.

When we reached our motel we could hear loud drumming from across the street (“you’re not in Kansas anymore Susy”) and were told it was a group practicing for a Polynesian dance contest that would take place that weekend. The drumming went on for some time but was very faint when our door was closed. Our room had a kitchenette and we were able to get a few things at a couple of very small stores just up the street. Later we found a good store about a mile away and bought more groceries.

To get to downtown Auckland we needed to go to the airport and then take one of their frequent buses, which we did the second day. Some buses tour various parts of the city but we wanted to do a little exploring near the port on Queen Street. The bus we took turned out to have just the two of us as passengers and the driver, of Maori descent, gave us a history of the Maori, the indigenous people of New Zealand, as we traveled, pointing out a small volcano where they had defended themselves from invaders and telling a story about the first Maori to come to the area in ancient times. They are believed to have settled in New Zealand in the 13th century A.D.

Auckland is a city of 1,413,700 people and is on the north island. The Maori settled in the area around 1350 but when firearms were introduced faced many conflicts. By 1864 50% of the populations was Irish, while most other New Zealand cities were predominantly English. In 1961 Maori and Pacific Islanders formed 5% of Auckland’s population but “economic deregulation in the 1980s brought dramatic changes to Auckland’s economy and many companies relocated their head offices (from Wellington on the South Island) to Auckland. Tourism brought 75% of New Zealand’s international visitors through the airport in 2004 and Auckland’s port handled 43% of the New Zealand’s container trade.” Beginning in 1986, more Asian immigrants were allowed and by 2006 the Asian population in Auckland was 18% and 36.2% in the central city. We noticed that in the Eden area there was a wide variety of international restaurants: Chinese, Thai, Korean, Japanese and even a Turkish coffee house. “Auckland is the only city in the world built on a basaltic volcanic field that is still active. “
(all of the information in quotes is from Wikipedia)

In Auckland we walked along some of the streets and took photos of the city. In this part of town the streets were clean and the buildings modern. We took a bus a couple of blocks and then walked up a steep hill to where the Sky Tower reaches high above the rest of the city. Here people can take an elevator to the top, walk around a circular catwalk with a tether attached to the railing, or if they feel extra brave, purchase the privilege 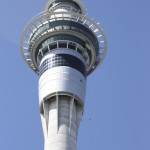 of leaping off the rim and dropping down nearly to the street. We saw a couple of people doing this. They were attached, of course. Many other tourists were wandering about as well and as summer approaches the crowds will thicken. (Note tiny figure on  the right)

Much of New Zealand is designed to cater to visitors and we were impressed with the amount of posted information and the courtesy and help available nearly everywhere we traveled. Whether in the airport or wandering about Auckland, for instance, someone with a yellow vest seemed available any time we had a question or appeared to be baffled.

On November 1, we packed our bags and took a taxi to where our group was meeting.