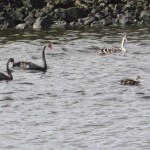 treatment pond? Really? But look at the Black Swans! This was our bird-watching tour’s first stop and offered some unexpected sightings, at least for me.

After meeting and greeting and loading our luggage into the van and picking seats we had set out on our first spotting trip under the our guide Derek’s supervision. He was also the driver in our explorations on New Zealand’s North Island.

Black swans have been introduced to the North Island from Australia and some have actually flown here. They are a large, black bird with a red bill and white flight feathers although floating gracefully on this pond the white feathers didn’t show. There were other birds here as well and I got a reasonably good photo of a Pied Stilt, a black and white bird with long legs. We were welcomed by the Welcome Swallow, New Zealand’s only swallow, which we would see frequently throughout our trip.

There were seven of us on the tour ranging in age from early 60s to somewhere around the early 80s. One couple was from Santa Barbara, California where both were marine biologists, retired. Another couple was from Indiana. He was retired as a sociology professor at Perdue and she still working with grant writing. The fifth person was a gentleman from South Carolina who had worked with computer technology of some kind. And our guide had a biology background and great interest in pelagic birds.

From the ponds we rode to the Hauraki Gulf, part of the Tasman Sea, and to Muriwai Beach. Here we were introduced to New Zealand Flax, a large plant with single pointed leaves emerging from the base of the plant and a long flower-stalk with red flowers. The fibrous leaves were used by the Morai for weaving baskets and making cord and rope. Both flowers and leaves were also used for medicinal purposes. When Europeans arrived on the island they found that the flax rope was stronger than the rope they had brought with them.

We walked up a trail about half a mile to an observation platform that allowed us to look off the bluff and down upon a large, guano splashed rock at a nesting site for gannets. Gannets are white with a yellowish head and expert divers and swimmers in their pursuit of fish. They can reach a speed of 62-miles per hour in their dives.

While looking at gannets we noticed a rescue training going on with people in the water jumping from a low rock ledge into the very strong waves and ocean currents. A small boat circled about in case it was needed but the trainees appeared to be strong swimmers and able to swim without 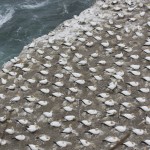 assistance. This training continued for the entire time we were there. The cold and the forceful wind made our van seem quite cozy when we returned to it. From there we drove a short distance to the Sand Dunz Café for sandwiches, which we ate sitting at a table outside. Being a short distance away from the sea the wind was more tolerable.

Our next stop was Waipu Estuary where we were fortunate enough to see a rare Fairy Tern, among other birds, and then headed back to our motel, The Salty Dog Inn and ate dinner that night at a nearby café.

By this time I had a chest cold and my notes say, “I hope I haven’t infected others” but of course I had and most eventually came down with it it. Sometimes we sounded like an infirmary as we traveled.

The next day, after a big breakfast, we took a ferryboat to Tiritiri Island. All the ferryboats that we used during our stay in New Zealand were people boats, no cars.

Tiritiri Island was heavily grazed by sheep and cattle in the early 1900s. Rehabilitation started and all the trees, shrubs and other plants we saw were planted by hand. An amazing diversity of plans and bird life had flourished. Because of New Zealand’s problems with invasive species, both plant and animal, we had to wipe our shoes/boots on brushes when leaving the boat as well as when about to step onto the island. School children had also come on the ferry for a field trip and we waited until they had dispersed before heading up a different trail.

One of the birds we saw on Tiritiri was the Tui. It’s a common bird with a variety of melodious songs as well as buzzy noises and has white neck patches on its otherwise black body (although in sunlight may look iridescent). There were robins –New Zealand’s robins are smaller than ours and black with a white breast. We saw honey eaters, a whitehead, stitch birds (very pretty with a lot of yellow on them), a green parrot in the top of a palm tree eating flowers, and very large Australian pigeons, larger than crows. The photo to left is an oyster catcher. 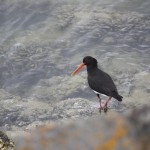 After using our binoculars through the woods we emerged on top of the hill where there was a lighthouse and a small building where one could buy tea. I ordered a cup of tea but had time to drink only half of it before it was time to go back down the hill to meet the ferry. At the bottom of the hill we huddled together on a bench near the pier and ate our lunches in the wind and rain. But we also were able to see Little Blue Penguins here in rock houses that had been built for them to nest in! There were glass windows in the top so that we could see them. These are the world’s smallest penguins with adults being aout 13 inches tall and weighing about 3.3 pounds.

On the ride back to the motel nearly everyone was asleep. Our days were full with breakfast usually around 7:00 a.m. (either at a restaurant or, if contnental breakfast motel staff would deliver it the night before), loaded up by 8:00 and then stopping briefly to get sandwiches or meat pies for lunch to take with us. Dinner was usually 7:00 p.m. and we’d go over our bird checklist while waiting for our orders, or, if dinner arrived quickly we’d do the lists right afterwards.

All the motels had heating units under the sheets with individual switches on both sides of the bed. Most had microwaves and tea bags as well as instant coffee packets.Many also had kitchenettes (sinks and refrigerators). Cost of meals and motels were part of our tour price. All the ones where we stayed were very clean. New Zealand is very conservation minded and all the motels had separate bins outside for disposal of cardboard, glass, and plastic.