We’ve been having so much hot weather this summer that when our local newspaper forecast “colder” as being 82 for today I decided to try a hike, which ended up being about 6.5 miles round trip.

A half hour’s drive brought me to the start of my hike in South Eugene and the first hour of hiking was a perfect temperature under an overcast sky. The trail starts out on the edge of a small subdivision and winds up the hill through maples, ash, vine maples, and Douglas fir. I noticed most of the little streams that gurgle down the hill are dry but two still had enough wa

ter to quench the thirst of a bird or, perhaps pooled where I couldn’t see it, a deer. I met a number of people on the trails, some with dogs, but not enough to feel it was crowded. I had plenty of time to myself.

When this path reached the Ridgeline Trail I turned left instead of crossing the road to go up toward Spencer Butte. The left turn gives an option of going on a hiking trail or taking the lower bike path. I decided hiking trail first and bike path on my return. Followed t

o the end this trail reaches Old Dillard Road. I wanted to get to Old Baldy, a small summit toward the north and ordinarily would have had to walk half a mile down Dillard to get to that trail. But this last year another trail was built that goes from the bike/hiking trail to Old Baldy trail and I wanted to see what it was like.

This was so much better than going along the road! And it was half a mile of new trail for me, paralleling the road but out of sight and hearing from it. It winds across several small gulches and, as with mo

st of the trails I’d been hiking on this journey, was shaded, a welcome situation now that the clouds had disappeared. At one point there was an old-growth Douglas fir, leaning slightly away from the trail. This was unexpected here since everything else appears to be second or third growth. And I also saw two Ponderosa pines, not common in this area.

I thought the trail might climb steeply up a powerline which I knew went across right at the trailhead but instead it zigzags up along one edge, mostly in the shade. From there I crossed the road and headed up Old Baldy Trail, choosing to make the loop counterclockwise. Everything is so dry. This is a southeast facing slope and the tall grasses 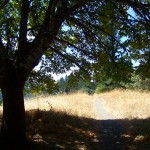 are brown and crisp. Blackberry leaves are showing a bit of color and many of the berries are dry and wizened. There’s not much shade on this slope so I stopped where the rare tree provided a break from the sun. We used to hike here before there were any houses but an area of large, expensive homes fills the lower slope. With the view to the east and the south somewhat hazy from forest fires I thought if I were a homeowner here I would be very concerned about fire. I did find one cigarette butt on the trail.

At the top of the ridge I turned left and walked until I came to where I knew there was a sturdy wooden bench and was thankful it was still in the shade of a giant fir. This was the spot to eat my granola bar and apple and drink some of the iced tea I’d brought although it 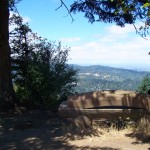 wasn’t icy! The view from this spot is of the area of South Eugene near where we used to live and out to the ridges beyond. And there was a nice cool breeze, enough so that I actually felt a little chilly until my body cooled down, a perfect spot for a snack. This is a special memorial bench with a plaque dedicating it to Rechelle who lived only 37 years and died in 2007. I don’t know who Rechelle was but she was loved and the plaque names the site Rechelle’s Lookout. If this was one of her favorite places then I hope others who sit here will also be appreciative of her having lived, even for such a short time.

My trip back down the trails was uneventful, except for spotting a pleated woodpecker working its way up a snag, but when I was once again in my car and changing out of my boots I noticed a woman across the street replenishing a gallon jug of water in an ice chest. She lives in a small house, brightened by a long window box full of petunias, right across from the trailhead. For a number of years she has provided water and cups in the ice chest for hikers, and a bowl of water for dogs. This is the first time I’ve seen her. Lots to be thankful for on this day.