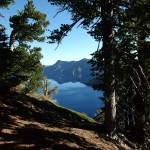 How things change in 54 years! Friday, Tom and I took our little Casita trailer and traveled to Crater Lake via Highway 58 and 138. I had talked him into our participating as a member of Friends of Crater Lake in helping staff an aid station along the Rim Drive for a bicycling event on Saturday. We were going to stay at Mazama Campground on the south side but drove in through the north entrance.

Crater Lake National Park encompasses what used to be Mt. Mazama, a mountain believed to be at least 12,000 feet in elevation. A tremendous eruption, 7,700 years ago, resulted in the mountain collapsing, leaving the current caldera, which includes a little cone rising above the water, Wizard Island. The lake is 1,943 feet deep and is 4.5 to 6 miles across, the deepest lake in the United States. The annual snowfall is 43 feet although this year it was much less. In August there was a fire at the north entrance and for a time it was closed. We could smell smoke and see the burned trees, mostly lodgepole pine, although the fire was no longer burning.

I’ve been back to the park several times but it’s amazing how my mind zooms across over 54 years to what it was like to start working as a seasonal-ranger naturalist, the first time beginning in April of 1961 and ending in October. I was the only female uniformed staff person both that summer and in 1962. My uniform was similar to an airline stewardess—brown skirt, white blouse, jacket, perky little cap, nylons and wedge shoes. And in this outfit I gave evening campfire programs, led hikes, sat in the boat going around the lake (which included getting out on the Old Man of the Lake, a hemlock floating upright, that has been there for years) so that the boat could back off and tourists take my picture. I came earlier than most and had a small cabin all to myself until the other seasonals arrived and I moved into the ranger dormitory. We ate in a mess hall and were given large sack lunches each day.

Tom and I drove across the Pumice Desert, a barren stretch between the trees near the entrance and the start of the road going up the mountain. Pumice is a volcanic glass that is filled with pores and very light. If we’d stopped and put a small rock of this in a container of water it would float. I remember one of my fellow seasonals telling the rest of us about his being called to help when a car wrecked along the Pumice Desert, his first experience with death.

Rim Village is a development along the edge of the lake and includes Crater Lake Lodge and a coffee/gift shop run by the concessionaire. One addition, that I think is a great idea, is a bright green trolley. Tourists can be driven around Rim Drive in one of these and not have to deal with fear of narrow roads and high places. But I kept looking at the area trying to place what had changed. The entrance to the coffee shop has been moved to one end. It used to face directly toward the parking lot and the lake and in April, 1961 we walked through a huge galvanized culvert to gain access because of ten and more feet of snow. Today that parking lot is gone also, replaced by grass and rocks, and cars park behind the coffee shop, w 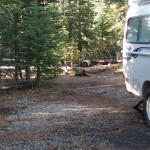 hich now has a deck out in back.

Back on the road we drove down the hill and past the park headquarters, which I knew was changed from previous visits. The ranger dorm is now office space, for instance.

Four miles further along we came to Mazama campground, also now run by the concessionaire. In the 1960s that’s what was there, just a campground. I remember giving a slide show/talk there one night and being interrupted by a man leaping to his feet, pointing to the sky and shouting, “There’s Sputnik!” It was tent camping only and there were a lot of mosquitoes. Now there is a store, cabins, a gas pump, a restaurant, a dormitory for employees, and numerous camp loops. In the summer I’m sure there are still numerous mosquitoes! Some accommodations have been made for RVs but only a few sites have electricity. 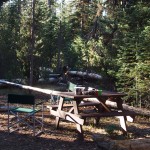 Our reserved site was nice, a small drive-through along the road right above Annie Creek Canyon. But they’d neglected my request for a water faucet and electric hookups. One of the employees found another site for us (shown in one person’s review as being one of the two worst sites because it was near the RV dump station) and we were fine with it. We wouldn’t be there most of the time. Plus the camp had lots of privacy, was surrounded on three sides by trees (lodgepole pine, white fir, mountain hemlock) and included a little table tucked back in the forest where we ate breakfast and dinner. Compared to an RV park it was wonderful! No enormous RVs with windows towering over you, no people sitting in their plastic chairs being entertained by watching their neighbors, no cement pads. And at night the stars seemed so close you could touch them.

Our first breakfast was rushed because we had to meet other volunteers at park headquarters but our last breakfast was delightful and sitting there on that chilly morning, moving folding chairs around the table to catch sunlight, hot coffee mugs in hand—perfect.