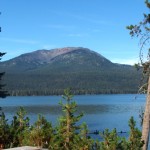 After our long day with Ride the Rim volunteering, we had a quick dinner—salad, soup and some good bread. Included in the soup were some green beans from our garden. We went to bed shortly afterwards, really tired.

Sunday, after breakfast (and this time there was coffee!), Tom took our bikes off the back of the trailer and we were ready to try some riding on the paved path around Diamond Lake. Last year we both rode quite a bit but neither of us has ridden much since then. The total loop is around 11 miles. We took snacks and something to drink and headed out.

I’d had my bike worked on before we left but Tom had some trouble with his so we decided to just take it easy and not ride far. The trail is easily accessed below the RV place, just across the highway. Because of the fire danger a lot of trees along the highways, and actually along the bike path, have been pruned and many trees thinned, with stacks of cut branches alongside. There are campgrounds and day-use areas along the lake and I’m sure this is one of the reasons for the brushing and cutting. The trail passed alongside a camping area and at the first parking lot a man was sitting with a clipboard. A sign nearby said Survey Ahead. Tom stopped to talk to him for a few minutes while I went ahead. I planned to take a few pictures of the lake and of Mt. Bailey.

Later Tom told me the survey person was from Germany and he said he was trying to get information they could use in German parks. He was impressed by how much open space we have. He was asking people things like what drew them to the area. Tom thought it was part of his studies at a university. 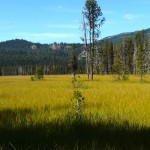 At one point I stopped, parked my bike, and walked through some knee-high blueberry bushes to get to the edge of the large green meadow that extended for some distance along the path. (This meadow was grazed by sheep in the 1930s) I wanted to get green meadow and Mt. Bailey. I’d just reached the grass when I thought I heard Tom coming and began to back up so I could see him. Suddenly I realized there was a hollow space where my foot was going and I staggered backward—would have made a great video I’m sure as I finally landed on my back in some blueberry bushes…..and some water. Had to laugh out loud at myself—no injuries, just hadn’t realized there was water hidden by those bushes and was wet from foot to shoulder along my right side. My daypack helped provide some padding too. Stood up, carefully took the picture (I’d held the camera up),right and walked back to my bike. 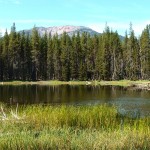 I rode ahead a short distance and then back to meet Tom, suggesting to him that we explore a couple of small lakes that we hadn’t noticed before. Actually they were more like large ponds. We parked our bikes and admired Teal Lake, then walked a quarter of a mile past Teal Lake to Horse Lake, which involved crossing a paved road. Horse Lake was even shallower than Teal Lake and supported a lot of water lily plants. On the way back I got a nice picture of Mt. Bailey with Teal Lake in the foreground.

From there we rode the rest of the way to Silent Creek, a fairly large stream with an arched bridge over it. The creek is about 20 feet across and the quietest stream of that size I’ve ever seen! It was here last year that we accidentally went two different directions. Tom had b 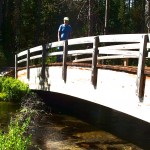 een ahead and gone left. I’d opted to go over the bridge to the right. We didn’t meet again until a couple of hours later when we arrived at our trailer site an hour apart. Needless to say we were together 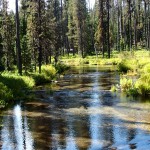 whenever the trail branched this time!

We crossed the bridge and found a place to sit on a log in the shade. The day had gotten quite warm. We saw a brown creeper, a very tiny bird, working its way up one of the hemlocks. Then Gray Jays (Camp Robbers) found us! I have no idea how they knew we were there. I’d seen three other bike riders cross the bridge earlier but that was it so no recent visitors had been there.

Those jays knew suckers when they saw them. I think there were four or five birds. Smart and sassy and wanting food and more food. Fortunately we’d eaten most of our snacks when they found us but, even so, I found myself digging in my daypack for any granola bars I might have overlooked. We usually don’t feed wildlife like chipmunks or golden-mantled 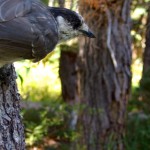 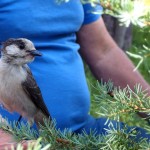 ls—knowing it’s not really good for them– but it was hard to resist. Tom even fed them a couple of berries from the bushes. They would take the food, disappear and then come back. We assumed they were storing it for future use. Eventually we ran out of food. Gray Jays are monogamous and stay together year ‘round. This was probably a family. 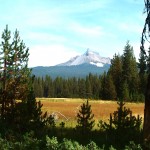 We rode about another half mile to where we could see Mt. Thielsen (9,183 ft.) across a large meadow and then headed back to our campsite. I took a shower; we relaxed in the shade with a drink; ate an early dinner; and went to bed reasonably early. So often we’re rushing around on a trip and it was nice to just sit for a while. The next day we headed for home, running into smoke near Dexter, east of Eugene.

It had been a good trip though somewhat different than what we’d expected.