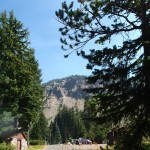 Saturday morning we got up at 5 a.m., tossed cold pizza and apples in our small ice chest for lunch, and brought something to drink. We gulped breakfast, skipped coffee, put hot water in a thermos for hot tea and left for the park.

The road was open. We showed our pass to the ranger at the check station and headed for the Rim. At one point on Pumice Desert there was a dense cloud of smoke, as if some had gotten stuck in a low spot, but after that it was clear all the way. What a wonderful, smokeless day it turned out to be! We had a strong hint that there wouldn’t be a lot of bike riders though when we got to the North Junction and saw only the volunteers setting up the station. And there was almost no traffic 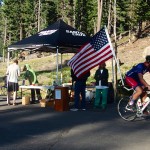 on the road. Part of the road, from North Junction to Rim Village, has been under construction for some time but the side toward the lake was mostly paved and the other packed gravel.

We were late arriving at Park Headquarters but, because of the low turnout, it wasn’t a problem. All the smoke from the forest fires meant a lot of people hesitated to come because they didn’t want to be exercising in the smoke. And Highway 138 was closed because of a fire. Plus, part of the Rim Drive was closed until the previous night. Those who took the chance, however, were quite pleased with themselves! 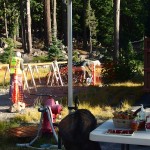 It’s fun being involved as a volunteer and since we weren’t rushed with swarms of people there was a more of a chance to visit with participants as well as with our co-workers. Most of us were representing Friends of Crater Lake but others also volunteered and a ranger was there part of the time. We checked in those who had pre-registered and asked others to register. Since this is a free event it’s not a requirement but registration helps to track numbers and if there is a problem it’s good to be able to tell family whether or not someone checked in. This also provides an opportunity to ask whether or not the participant has done the ride before, provide information about the route, and answer questions. 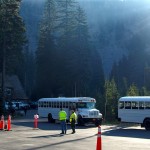 There were all ages and all abilities attempting the ride. Many just wanted to do 24 miles and avoid the nine-mile stretch that included the part under construction and traffic. But a number of riders also did the 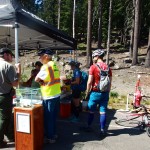 whole 33 miles. I noticed one family, including a 7-year old boy, who completed the 24 miles. And some just biked what they could, as I did last year, happy just to participate. One good innovation provided is bike corrals, one at the North Junction and one at Park Headquarters. People could park their bike (receiving a ticket with the matching number to be attached to their bike) and take a shuttle bus if they needed to go get their car at the Rim. Then they could drive back down to get their bike. Tom ended up doing a lot of the corral work. Some even rode back up on the bus to get a meal or shop at Rim Village. We just made sure everyone knew that we closed down at six as did the shuttle service.

When I worked here as a seasonal ranger-naturalist in 1961 and 1962, I came before the other seasonals arrived (the first year arriving in April when there were 10 feet of snow on the ground) and lived in a rustic cabin. Then, when the others came, I moved into the ranger dormitory. I had a room downstairs on the right side of the building. All the fellows were upstairs except for the two more mature ones who were also in my wing. Today the cabins are long gone, replaced by apartments. The dormitory is the Visitor Center. I found out my room is someone’s office. The mess hall is used for administrative purposes.

There used to be a one-room school in the old Administrative building where the park children went to school. One day a week they had ski lessons. A small rope tow, powered by a car engine (I think—memory may have it wrong) was available at the end of the road, past the cabins. To go to high school they had to go to Chiloquin. Today there are only two children in the park.

16 Degrees of Separation
After lunch I talked to one of the rangers about the fish in Munson Creek as he walked toward our booth. My husband asked him where he’d been before coming to Crater Lake and it turned 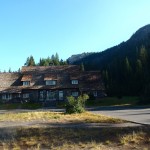 out it was Whiskeytown Lake, near Redding, California. Practically next door to Weaverville where I used to live. Well, that started quite a conversation. He knew Weaverville, he knew all the state parks in the district there—Joss House, Burney Falls, Castle Crags (where I grew up), Ides Adobe and Old Shasta. He knew there were fires burning there right now. And he knew about Canyon Creek. In fact, John said, he knew someone who lived up Canyon Creek. “Give me a last name,” I asked. “Corp, Noah”, he said. I told him I knew Noah’s parents, Connie and Dennis, from Weaverville. What’s the likelihood? I love things like this! 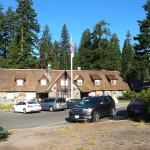 Tom and I stayed a little after six waiting for a ranger to come and pick up the donation box (funds would be used to help with next year). The person in charge of our group had left much earlier to go around to help the other four stations shut down and load tables, chairs, leftovers, etc. into a truck. Four of us took down the tent, stacked food boxes for him to pick up when he returned much later, and gathered garbage bags, etc. for the rangers to deal with. A car drove up and a female ranger walked across toward us, smiling. It turned out she was someone I left a message for the last two years, as well as this year. Marsha was a graduate student working with my eldest brother at Penn State when he was a professor there. He had told me she worked here and asked that if I visited to be sure to say “hi”. He has been retired now for some time. Marsha is Chief of Interpretation and Cultural Resources at Crater Lake and has been here nearly 20 years. So good to finally meet her and have a chance to chat for 15-20 minutes. If we hadn’t volunteered to wait for the donations to be picked up we’d not have met her.

When we drove along the Rim on our way out the lake had some smoke again so I didn’t take a picture.