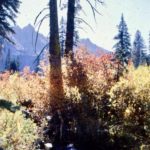 This must have been Labor Day weekend because we went out to the ranch on Thursday. Maybe it was a short school week? After lunch I tried to mow the lawn but had a few problems with Clarke. He opened the front door and stuck his head out, after having been put in his crib. I put him down on our bed but that didn’t work either. Put him back in his crib and he climbed out again. So I mowed the lawn any way but he spent a lot of time bugging his brother and sister. Then I cleaned the pool.

On Friday did two batches of laundry, worked with Jeffrey in his Sesame Street Book for half an hour, played a game of multiplication cards with Rebecca. She and Clarke both had colds. I thought Jeffrey and I were coming down with it too. After lunch we went down to the blackberry patch across the road where I spray painted two garden-spider webs, after chasing the spiders out. Then touched the webs to construction paper, loosened the attached lines and the web designs were now on paper.

Started the rockwork again. I had to do a little more digging and mixed three batches of cement. It was slow work and hard on the back but “I kind of enjoyed it. No stretch looks the same as the one before and construction is fairly permanent, versus ironing and dishwashing, and it looks good once it is done. Also it is very obvious that you’ve done it.” It wasn’t until a year or so later that I learned I hadn’t been doing it quite the way it is supposed to be done; that each rock should fit snugly into the spaces, not just be put in with cement to hold it. Fed the children early. Bob didn’t get home until 8:00. 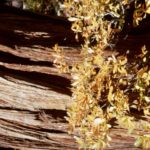 On Saturday I put new tarpaper on the roof of the outhouse. Hauled the roll of paper up a stepladder, etc. Then it wouldn’t leak when it was raining or the sprinkler was on. Picked a sack of green apples and picked some tomatoes and green beans in the garden. Jeffrey picked his one little cucumber, which he had with lunch.

After lunch Bob mixed up a large batch of cement for me and I worked from about two until five. Too much of a stretch but I got a lot done. About an hour later we had a huge thunderstorm with a bit of rain. Poor Clarke wanted to be out on the porch with the others but every time there was thunder he would come in.

Just before we left the rain stopped. “The clouds were slightly broken. They took on a peach color and then were brightened by rainbows—a large almost horizontal one; above it a fainter one, and finally a very faint one. Very dramatic. As I was getting into the car we had a regular cloudburst—lightning, thunder and rain all the way into Weaverville. Bob spotted a smoke on Eagle Rock Ridge, around the head of Mule Creek. He called the USFS and they already had someone on it. “

Monday, when we were back in town, Doris called—we’d been seeing bombers go over. She said there was a fire about five miles north of the ranch.

Tuesday night was the first adult nursery school group meeting. Only eight or nine people showed up and things really dragged. They got the officers elected though. Thursday was the first nursery school class and rather exhausting and unorganized because I wasn’t organized. We had 13 children. Afterwards I bought a few groceries, went home and ate lunch, then picked Rebecca up at school, went to the pool with her for half an hour, picked up Clarke from Linda Lindsey’s and went home to be there when Jeffrey arrived.

I’d been asked to substitute at Lewiston on Friday but asked whether they could find someone else and they did. Nancy Van Duyn came over to play with Rebecca after school.

Bob had a sore throat on Saturday and spent most of the morning sleeping. We were out at the ranch. He worked on the septic tank all afternoon. I mowed the lawn and picked apples. Made two pies. Sunday a fire in the stove at breakfast was a necessity-really chilly. I hadn’t planned on doing much but started painting the floor and got about half of it done before lunch. Those floors were old, wide boards with cracks between them and needed paint at least once a year to withstand the wear and tear of use. Also, the quick-drying paint would fill the cracks and keep dirt from accumulating in them. Bob wanted help after lunch. He’d finished the concrete blocks Saturday and that afternoon was doing the sealing job. This necessitated sifting the sand through a screen. Rebecca, Jeffrey and even Clarke (briefly) helped for a while, rubbing sand through a screen door into the wheelbarrow. I wouldn’t have started the floor if I’d known he was going to want help or how time consuming it would be. I screened sand, mixed cement, then refilled Bob’s pans whenever necessary. I’d paint for a few minutes, hear him yell for more stuff, run up and haul it, run back down, etc. He got one tank section finished (the smaller) and I got most of the floor done but still had a little more to do. 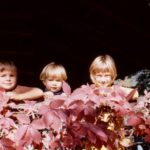 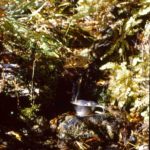 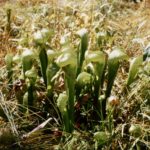 Nursery School: I tried to leave the house around 9:00, taking the kids to Linda’s and would get to nursery school by 9:30. I was usually not out of there until nearly one and then usually had errands downtown so would often eat downtown, not getting home until almost 2:00.

The first evening class Kenneth Wahl, came up from Shasta Junior College and spoke on parent effectiveness training, which he taught as a night class there. He was the school psychologist for Shasta Union High School District. We had an open meeting and about 10-15 extra people came. I planned to have an article in the newspaper asking for names of those who would like to have him teach a class the next semester in Weaverville. The second class I talked about children and books—typed up lists of the Caldecott and Newberry Award books, etc. I went into the background of children’s literature and talked about how to interest children in reading. So those would have been the September and October meetings. 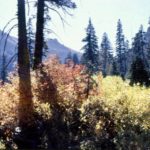 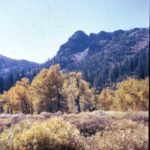 Sometime in September I left the children with Florence and hiked into Bear Basin and back. Left the trailhead at 11 a.m. and was in there by 2:00. “ It was really pretty with the azalea leaves bright orange, reds and yellows. No one else on the trail. I took Freckles (Florence and Leonard’s dog). Big meadows, lots of pitcher plants; back at the trailhead by 5:30.
Aspens bright yellow in the upper meadow. “ 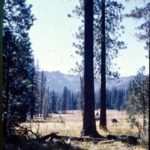 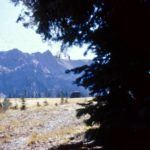 The next day I went to Yreka with Alice, Horace and Leonard to a wilderness workshop. We learned about some new such as Seiad and the Russian Peaks areas.

The week before that we “went to a meeting of the Board of Supervisors in Weaverville at the courthouse. Over 100 people crowded into the room, many sitting on the floor. A fascinating evening; many spontaneous comments. Paul Richens and Fred Esselink showed slides, just enough. John Keane was there but not saying anything until he was forced to do so when Dave Ohde asked who did ask for the meeting. The Forest Service was under quite a bit of fire. The Supervisors passed a request for as large a wilderness area as possible, with land exchanges from S.P. requested within the county. “

In mid-September Rebecca fell from the monkey bars at school and broke her collarbone. I was visiting the dentist’s office with nursery school kids when Linda Lindsey brought her to me. The school thought she was just hysterical I guess when she kept weeping. I suspected what the problem was when I went to lift her onto my lap and she screamed. Got Dr. Polka to arrange for x-rays. He put a cloth harness on her for three weeks, and then she was ok.