It’s funny how one thing can lead to another and that to another until what you started to write about turns into something else. My goal was to tell about some of the time I was attending the University of California at Berkeley. I’d gone my freshman year to Shasta Community College (then called Shasta Junior College) in Redding, California. At that time the college was located along Eureka Ave. (Highway 299) where the high school is today. My sophomore year I attended Humboldt State in Arcata and from there transferred to Berkeley where I was totally a fish out of water. Suddenly I was dealing with busy streets, a very large campus and no familiar landmarks. This was not my environment of forests and streams and hiking trails but the sounds and smells of the city and the need to pay attention to street signs. I will admit, though, that the smell of the doughnut shop on the corner was quite pleasant.

I lived in a building that, according to the deed, was to house only white, Christian women, although one semester I had an Asian woman for a roommate. She and I are still good friends. Later the building had to be converted to offices because of this caveat, now illegal.

The first year I took 17 units that included a foreign language and a science class that included lab sessions. All I did was study. It took me an extra semester to graduate because of a couple of unfulfilled requirements. But sometime during those two and-a-half years I took a wildlife management  class and a forest ecology class as part of my major requirements and worked on projects for those classes by hiking up into Strawberry Canyon above campus, which I’m sure helped save my sanity. I was able to look at my surroundings and write about them in a somewhat scientific way, describing the pine trees, the woodrat nests, and other animal and bird life. During my years at Berkeley I also joined the hiking club.

I wasn’t an “in-group” member of the hiking club but found value in the campfire and the singing of songs in the eucalyptus grove as well as several backpack trips, my first. I still have a worn copy of Song Fest, a 1956 edition of a book that started in 1944 as a collection of songs put together by the Intercollegiate Outing Club Association (LOCA), which was founded in 1932. This is something I just learned this afternoon, never having examined the book except as a container of songs, a number of which would be considered politically incorrect today. When new, the book cover was bright yellow with red print, a paperback. Now only the spine of the book retains any of that color and the pages are bent at the corners and stained. What has reminded me of Song Fest, off and on, is a street I cross during my neighborhood walk—Eddystone Street. One of the songs in the book is “The Keeper of the Eddystone Light”:
“My father was the keeper of the Eddystone Light,
He slept with a mermaid one fine night,
From this union there came three:
A porpoise, a porgy, and the other was me.
Yo ho ho, the wind blows free,
Oh, for a life on the rolling sea!”
There are several verses.
In the dark the eucalyptus grove seemed a world separate from campus, smooth trunks lit by the flickering bonfire and the strong scent of eucalyptus leaves mixed with wood smoke. At the end of a singing evening someone would inevitably throw a tire on the fire, or more than one, and the flames would shoot upward and the air become strong with the scent of burning rubber. At that point the songs would conclude with “Throw a tire on the fire and you’ll expire.” It’s a wonder the grove didn’t burn. Eucalyptus trees were brought to the United States from Australia in the late 19th century as a fast-growing tree but since the Oakland fire of 1991 you can no longer plant them because of their high flammability. I have no memory of there being other words but “Throw a tire on the fire and you’ll expire” seemed pretty conclusive.

The hiking club also offered folk dancing and rock climbing. I went on one beginning rock-climbing training session at Indian Rock and decided that was more than enough for me. Too bad I didn’t stick with it.

Another urban experience with the hiking club, I guess a small branch of it or maybe just a group led by a member, was a trip through the steam tunnels. I still wonder how I got up the courage to do this since I was always somewhat of a “goody two-shoes” and very law abiding at that age. Beneath the campus are numerous large tunnels that contain pipes carrying water and steam and who knows what else to the various buildings on campus. One night we met, I think near the science building, and walked down steps to a door that led into the basement area and its tunnel. I don’t remember how we opened the door. Then we were in the dark tunnel. We had flashlights and could see the roof and piping above us had some condensation that dripped down occasionally. The lead person knew his way around and eventually we opened a door that led into the basement of another building. Suddenly, as we proceeded cautiously down the hallway, a custodian came around the corner. “Run! Run!” And we darted back to where we had entered, some chortling. I’m not sure who was the most surprised at that meeting but his eyes certainly got larger.

I just did a search for the tunnels on line and found this warning from 2001.
http://archive.dailycal.org/article/5703/campus_steam_tunnels_are_not_toys

Obviously we didn’t know all this back then. And here’s more from Wikipedia.

“Underneath UC Berkeley’s oldest buildings is a system of steam tunnels which carry steam for heat and power.[1] During the 1960s, Berkeley students chained the doorknobs of the Chancellor’s office in protest over the Vietnam War. The Chancellor, having no other way in or out of the building, used the steam tunnels to escape. Afterwards, the exterior double doors on that building were changed so they only had one doorknob, and this remains today.” 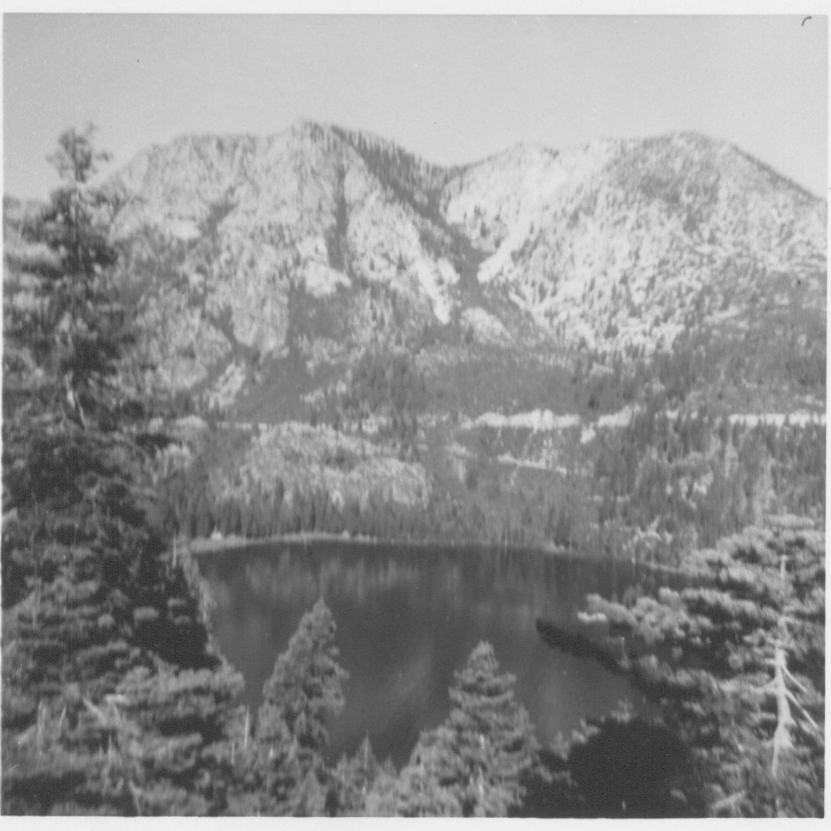 On my first backpacking trip I carried a small aluminum Kelty frame with everything wrapped in plastic and tied with cords. We hiked into the Sierras, one time going to Yosemite Valley, another time to the Mt. Dana area and another to the east side near Bishop. During the Yosemite Valley trip some of us climbed up Half Dome. Heights are not my strong point and looking at the photos I’m surprised if I did this. Perhaps I just stayed at the bottom of where the cables start. It’s hard to tell from the photos. 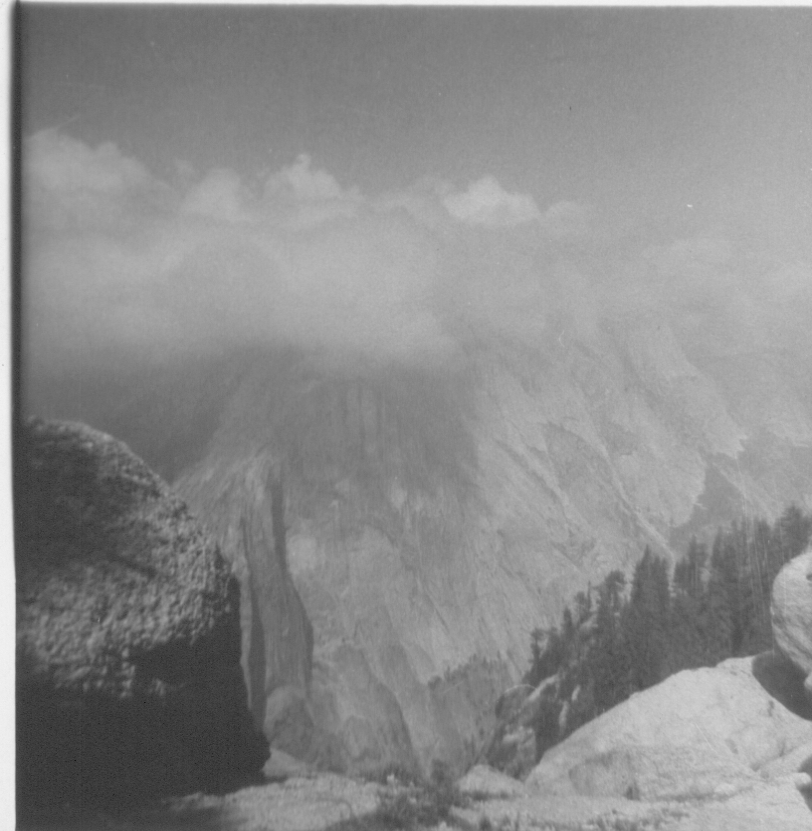 The hiking club led also to my first and last trip of camping in the snow in a tent. All the girls were in one tent and the boys in the other. My sleeping bag was along an outside wall. I froze! In the morning we chopped a hole in the ice of Fallen Leaf Lake to get water. I remember drinking hot chocolate with just a little water in it and it tasted wonderful, like hot fudge warming my stomach! I’d been on skis but had no business skiing with a backpack at that time considering my limited skiing abilities. The next trip I used snowshoes and we stayed in a ski lodge. There was no running water but we had a wood fire so were warm.

In my searches on the internet I came across a UC Hiking Club newsletter, The Bear Track, from 1958 that looks as if it were copied on one of those old jell type copy trays. It was published four times a year. Someone wrote about going to Gilmore Lake. I have a photo of Gilmore Lake (see above lake photo) from my time in the hiking club but am not sure whether or not this was the same year. There is also a list in the newsletter of all the members and my name is there as are the names of two people who lived in my dorm. I still correspond at Christmas with Joan and hadn’t realized she was in the club. Funny! She had a paragraph in the newsletter as well so was probably more active with the organization. I also discovered a website that is seeking former members and serving as source for members from all the years so I sent in my information.

Time to stop this rambling. It is easy to get pulled into the internet for hours, particularly when searching for memories.