I would be remiss if I forgot to mention the Treasure Hunt. After our daughter was born,Bob asked Dr. Breeden whether he’d like to be paid by having to find the check. For some reason this really appealed to our doctor. He thought it a great idea and a challenge and said he’d take his son with him on the search. So Bob figured out different clues that involved a compass and all kinds of directions to various places. It seems to me that the last clue included going to the cemetery and having to find several different pioneer tombstones, do some subtracting of dates, and pacing different directions. I wish I’d written all that down at the time. 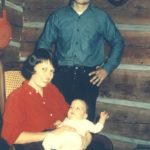 My Mother’s Day present was flowers, four lilies that looked like tiger lilies. “They are so pretty, and it’s the first time I’ve been given flowers!” I planned to plant them at the ranch after they finished blooming. We went out to the ranch where Bob mowed the lawn and I cleaned the refrigerator and outhouse. Cool in the morning and warm in the afternoon. The Ohdes came out. Bob and Dave worked on the spring, diverting the upper spring water so it flowed directly instead of through the lower spring box. They connected it to a bathtub, which acted as a settling tank. Doris, Eric, Linda and I walked up to the upper flat and I showed them how to find the trail to the Upper Ranch. Then we went back to the house to make ice cream. After lunch Eric went to help Bob and Dave while Doris and Linda and I went upstairs to paint the floor. Later we all ate ice cream and cake and then went home. 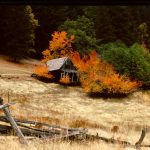 I substituted two days at Lewiston, 1st and 2nd grades, on the 19th and 20th. Stayed overnight in Weaverville. Bob got back at 2 a.m. after working on Minersville phones. He worked at Minersville several nights in the next few weeks, not getting in until 2 or 3:00 a.m.

Scoot Miller’s agreed on price was $500 although he found afterwards that the work didn’t take quite that long. Bob helped one night working with the tractor in a place where Scoot would have sunk. 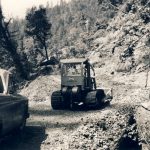 Bob Gravette was running for County School Superintendent and I began to help with the campaign a bit. I traveled some, taking Rebecca, and going as far as Del Loma.

Hal Sebring urged Bob to develop a trail counter saying it would help preserve Wilderness Areas by recording the number of people using the trails.

We moved back out to the ranch. Rebecca delayed the start a bit, the first day, by trying to feast on axle grease. Took some time to clean her!

Bob strung chicken wire on the south porch so it could be used as a large play area. He found a large leak in the pipe under the English walnut three. This pipe was about 60 years old and quite rusty. He fixed that but of course another leak showed up. Eventually it would all be replaced with pvc pipe.

“There’s a flicker nest in the second apple tree. The young sound like bees! Adults had peeled bark and twigs off that section and drilled a hole. “

We got some rain in early June. I finished planting my small garden and hauled a wheelbarrow of manure from the barn.

We celebrated Rebecca’s first birthday with my brother Peter and family—cupcakes and homemade ice cream at the ranch. Peter found a piece of chipped obsidian in the leak under the English walnut. He was working on trails for the USFS that summer. I think that was the summer when his whole family went out and camped on the trail, somewhere near Deer Creek. One of his co-workers and his wife camped there also. A cloudburst in Big Bar “severely washed” our road.

Shortly after her birthday, Rebecca started going up and down the ramp to the porch and walked up to the orchard a couple of times. “She’s so pleased with herself. She inches down the ramp the way I go on escalators!”

One Saturday Bob worked most of the day on the road. The drag broke so he took the tractor down to use instead. Rebecca and I ate lunch with him by the gate. Then we went home and took five gallons of gas over to him. On the way back from lunch a limb caught and wedged between the back fender of the VW and the front wheel, like a bow. I cut it with a hacksaw but it had dented the fender.

I gave Bob a picture of Rebecca for Father’s Day. Then he left to meet Dave in Weaverville to go fishing on Rush Creek.

My sister-in-law, Angenett, along with her three (Cedric, Nicholas, and Jessica) and Rebecca and I went to Tahoe to see my parents, leaving on a Tuesday (the eldest child was about four and youngest six months—I think we were in Peter and Angenett’s VW bus). The first day there went well, with some hiking with kids—my mother took care of Cedric—it was a short walk but there were bogs, snowplants, etc. The second day my dad had trouble with his heart at lunchtime, trouble breathing. After a nap he seemed much better but it was frightening. We left Friday and were back in Weaverville by 7:30. Reading this now I think we must have been nuts to make a trip like that with all those little ones!

While I was gone, Bob had installed an apartment-sized gas range where the gas plate used to be. It was brown and I was quite pleased. I could broil now and could bake without heating the whole house up with the wood stove. He also put an electric light in the house, 25 watt, 12 volt. It put out more light than the Aladdin lamp and we used the Aladdin shade for it. And he began building a shelter for our generator. That evening Frank Walden came up to tell us that their generator had stopped so we drove down there and Bob fixed it. We had ice cream and cookies and admired their house, which they’d fixed up nicely.

Doris was the lookout on Eagle Rock that summer. We still had no phone at the ranch, and she and I worked out an agreement that, if I needed help, I’d flash her with a mirror and she could report it. With her binoculars she could see a little white dot (the baby in diapers) running around on our lawn.

Because there was a prolonged time of bad weather we postponed a backpack trip a few days. This meant we would be taking Rebecca with us to Sugar Pine Lake since Florence was going to be gone.