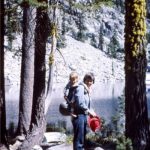 We started up the Sugar Pine Lake Trail at 8:00. It was a good trail, steep in spots during the first 5 miles, but the last three were nearly level. We stopped once in the morning for snacks and to let Rebecca run around. Stopped again for lunch and about an hour later for water and to let her play. The trail follows the creek and is through timber all the way. Many small streams run across so there was plenty of water. We passed through several meadows with small creeks and flowers—paintbrush, hellebore (not yet in bloom), monkey flowers, etc. In one meadow we startled a bear with a cub. She ran and the cub came down a tree and scampered after her.

We arrived at the lake at 1:30 and made camp. We each took a turn on the lake on an air mattress while the other played in the shallows with the baby. The lake is surrounded on two sides by step, jagged cliffs and tall forest comes down to the other shores- sugar pine, red fir, hemlock and another pine. Large boulders are scattered throughout the trees at one end. There were still patches of melting snow and a beautiful, cold stream plunging down short falls into the lake.

We ate macaroni and pudding the first night. Rebecca cried often during the night. I thought it was a combination of a new place and new food. She slept for about half an hour, then woke and wanted to chatter till about 10:00. We finally were too tired to sing or talk any more and she continued to talk to herself! There was a bright moon during the night and this was nice to lie and watch, especially its affects on the cliffs. 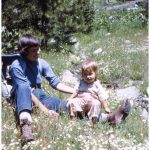 Most of the next day we loafed. She took a couple of short naps. We took our lunches over to where the inlet is, and ate at the foot of the waterfall. There were shooting stars and monkey flowers in bloom. Ferns grew in cracks in the rocks. There was an orchid not yet in bloom. In the afternoon we floated on the air mattress gain. Saw a Douglas squirrel, chickadees, juncos, robins, Steller’s jays and brown creepers in camp. We had a chipmunk gnaw a hole through our cloth lunch sack. Also, something took our bar of soap during the night.

I forgot to mention that we killed a small rattlesnake on the trail on the way in yesterday. Bob had passed already and it crawled across in front of me to hide under a rock.

The next day, I noted that there had been a strong wind that second night, with clouds blowing across now and then. Rebecca had slept very well. After breakfast she was ready for a nap and we packed while she slept in Bob’s sleeping bag. We stopped for lunch along a creek where there were azaleas and tiger lilies in bloom. We also passed several large bushes of blossoming 9-bark. She slept off and on as we hiked.

About a mile from the road we noticed a helicopter circling above us. It would disappear, go down toward Coffee Creek, and circle. Then a bomber joined it. When the bomber came we knew there was a fire. Further along we looked back and could see smoke rising part way up the ridge–well above the trail. The plane dropped borate but there was a strong wind and flames shot up the hill. Later, we watched nine smoke jumpers drop, three at a time. One landed in a tree. Two appeared to be dragged by the wind some distance across the brush with their orange parachutes.

By 2:30 we were back at the car. Drove into Weaverville and bought a few groceries, ate dinner in Big Bar and then home to get cleaned up.

The next day we all slept until 8:30. I did four batches of laundry. Bob cleared out the cellar area and we hauled some rocks from the top of the meadow and from down by the creek. In the afternoon he drove into Weaverville to bring back sand and cement. Our small cement mixer worked well.

Saturday we had rain, and some lightning and thunder. Rebecca appeared to be exhilarated by the storm, running up and down the porch yelling and talking. During dinner that night we saw a black bear wandering down along the edge of the field, opposite the house. After dinner I took her up to the top of the hill to pick some wild raspberries. Came back, bathed her; read to her and put her to bed. Then I went to pick some apples. “Every time I pulled on an apple, water poured off the trees onto me from the rain.” Bob mixed cement and placed rocks.

Sunday Bob suggested we go see the Ohdes, so after lunch we took the ice cream freezer, eggs, vanilla, etc. and picked up cream, milk and ice at Big Bar. We drove up to Eagle Rock Lookout. Doris, Dave and the two children were there. We visited, made ice cream, ate our ice cream and the cake that they’d made. We were invited to dinner and, while Doris was fixing it, the rest of us walked down to the spring. The trail drops down through Douglas and red fir, and crosses the hillside through brush and madrones. The water runs out of a small pipe. There are several galvanized tubs down there, apparently used for bathing by plane watchers during the war. They’d fill them with water and let them heat up in the sun. Several were short and more-or-less oval. One was large and barrel-shaped. We saw some old boschniaka (ground cones—a parasitic plant) along the trail to the spring as well as daisies, Indian paintbrush and penstemon. 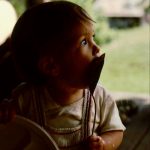 We could see our laundry hanging on the line from up there! The changing light on the mountains was wonderful—there were thunderheads drifting around and now and then they would block the sun. It was cold and windy when we left around 8:30.