On a Saturday, Florence and Leonard got back from Mexico looking tanned and relaxed, bringing hats for the boys and a necklace and bracelet for Rebecca. They ran into snow coming over Buckhorn Summit.

Friday I had met with Bob Gravette and George Files to go over our needs for a nursery school room. I’d made a sketch (to scale) and one of the secretaries had run off 10 copies of the sketch and estimates for me.

Bob went out to the ranch Saturday afternoon and put oil in the tractor. I was feeling satisfied with the increase of Community Concert memberships that I’d made.

On the first day of spring we woke to find 3-4 inches of snow on the ground and it continued snowing all day. Bob put the chains on his car to go work and took Rebecca and Jeff to school. Around 8:30 Helen Aven knocked at our door. She hadn’t been able to make it past our driveway, had done a 180 degree turn in the road, and ended up backing her pickup into our road. No chains on, no snow tires. She stayed and talked for an hour, had some coffee, and then walked to school. 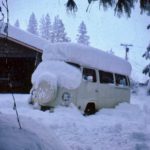 Bob came home for lunch but walked up from the road. He put chains on the VW and tried to get it out but it’s now firmly stuck across the top of our driveway. Rebecca’s bus dropped her off at the foot of Oregon Street and she walked home. Mr. Holland brought Jeff to the foot of our driveway.

I spent about an hour this morning hauling wood from the woodshed to the front porch–a few pieces at a time.

Jeffrey went out and played with Kinnik-Kinnick in the snow—running and leaping and falling. The dog was delighted to finally find someone who enjoyed it as much as she did. Later all three children went out to play. By 4:00 o’clock I measured 24 inches in the backyard. Walking down our driveway it was a couple of inches above my knees. Not counting what was packed down. Beautiful snow, not too wet. I did lots of laundry and cooked some stew and made cookies, just in case the electricity went off. It did but only for a few minutes. 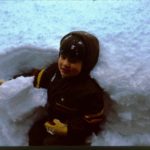 A little before six I called Leonard and he came over with his 4-wheel drive truck and picked us up at the bottom of the driveway. He took us over to their place. Bob drove his car there and we had dinner with Florence, Leonard, Scott, Michael, Dick, and Sandy and Scot Harger. Dick and crew arrived on a snowcat and, just before they left, gave all the children a ride. Florence served us a delicious soup—a Mexican recipe with shrimp in it– and salad and Mexican rolls.

Leonard gave us a ride to the bottom of our driveway. Poor Clarke…he was so tired but he held on to Bob’s hand and struggled up the hill. We have a good path beaten down. It started snowing again as we came up the hill around 9:30. We really had a good evening over there—lots of conversation and laughing.

Wednesday, Clarke went home with Waylene Stacy after nursery school to play with Jennifer. I spent an extra hour cleaning up the storeroom. Tuesday we had, as a result of super wet snow followed by rain, water running through the storeroom on the floor and coming up into the main room.

Saturday, late March: I walked downtown to get the mail and pick up a couple of things from the grocery store. Helen Aven was digging her pickup out so I stopped and helped her for a few minutes. The snow was about four inches above my knees on our driveway.

After lunch, when the sun was shining, I dug out snow from behind the VW, about four feet on all sides and in front. Was able to drive it up by the porch again. Then Bob drove the boom truck down the hill. Coming back (it had 4-wheel drive, no chains) the truck got stuck just below the turn. He had to tie the winch to an oak tree and pull the truck up onto the turn, out of the way, leaving the center packed so hard that the children and I were able to slide down it on the disk.

Bob shoveled some down at the entrance to the driveway and also helped Moon Lee do some digging around his car (he’d just gotten back from a trip.)

Saturday I had helped the children dig a fort but they really had the most fun making their own trails through the snow and lying in caves made by bent bushes. Rebecca wisely suggested they keep their heads out.

Bob took the VW to work Monday and came home around noon. The children and I drove him back to work. I mailed some packages and went to the grocery store. After parking at the bottom of the driveway we each took something to carry up to the house. It rained all day so I was sure I could take the VW to the house the following day.

I made two loaves of whole-wheat bread and two of banana nut bread. Bob came home around 5:00, gathered up his suitcase and went walking down the driveway in topcoat, rubber boots and rain hat. He was to drive to Redding and fly to SF again. I thought it was his last computer training class. He’d be home the next night. 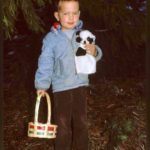 Easter Sunday, March 30th was cold and foggy early but clear and warm by around 11:00. I hid the eggs in the flower garden area instead of on the lawn where there was still too much snow. The children each received a hand puppet and a hollow egg filled with jellybeans (a Fred Varney special) as well as their eggs. Rebecca told me Jeffrey didn’t believe in the bunny anymore, although he hadn’t told me. I let him stay up the previous night to help color eggs. I heard him say that morning though “I’m sure glad the Easter Bunny gave me this puppet.” 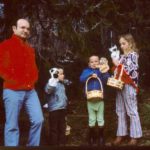 Tuesday I had a meeting at the Superintendent of School’s office to meet with an architect about the nursery school. I picked up Linda Ohde to watch the kids. When I got back as far as the firehouse though, and stopped at the stop sign, my clutch pedal went funny. The cable had broken. I left the car and walked over to the hardware store to use the phone. Called the schools’ office and the garage. The person from the garage got the car into low and I drove up to the (?) and left the car. Walked back to the meeting. Walked home.

Children had some cousin time during their vacation—Kent and Noel.
Rebecca and Noel got along well.

One day, while Rebecca was with Noel at Florence and Leonard’s, Linda Ohde came to watch the two boys, bringing cookie dough for them to cut out, decorate and bake. 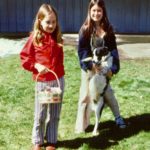 Bob and I went out to the ranch road. It took us all afternoon to go about one-fourth mile. He cut trees up and I stacked the sections alongside the road. The last tree was very difficult for him. We worried about the uprooted roots falling on him. I had to roll sections uphill and was really stiff the next day. We tried to drive to the top of the hill but there were still several inches of snow in places. We ate dinner at Big Bar.