Rebecca gets well.
Jeff smashes his fingers in a door.
Drove to Big Bar in a rainstorm to go to the Forest Forum meeting. Had to go by Proffitt’s and pick up the film on Golden Trout, which Ray Proffit had forgotten.
Helped in Jeff’s class the next day.

Sunday, after lunch, we drove out as far as the gate and walked down to the creek. The children played while Bob walked on up to the house. We ate dinner in Big Bar. Children were tired after walking about three miles and being outside for the first time in a while.

Bob got back on Friday evening after having gone to San Francisco Monday, Seattle Tuesday evening, and Vancouver B.C. on Thursday. He said Vancouver was a very attractive city: clean, people were friendly. He brought back some Canadian money for the children. Jeff “immediately introduced Queen Elizabeth to George Washington on a one-dollar bill. “ 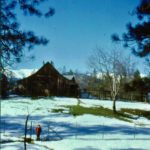 On the 22nd I took Jeffrey and Clarke to Redding to see a puppet show at the college. Rebecca chose to stay home. Afterwards we ate lunch in the mall and got some books at the bookstore. Lassen and Shasta both looked pretty with no smog. After we got home I made rhubarb pie and blackberry pie, and fixed lasagna.

While Bob worked on taxes, I sent a story to Ranger Rick and then hauled garbage to the dump. “While there I met a 70-year-old woman who told me she had adopted seven children of all races and nationalities and now lives comfortably on Social Security, collecting aluminum cans and collecting bottles. She plays the piano five days a week at the Nutrition Center.”

Bob was leaving the next day for Bakersfield so I ironed shirts and folded clothes after everyone was in bed. Mary Upham called to ask me to substitute that Friday for her at Douglas City.

Rebecca had been spending hours in her room with paper dolls, even making clothes for them. I’d gotten her a book of famous women paper dolls when I was in Redding.

I measured, sawed. and hammered boards together to make two boxes for lunch cubbyholes for new children at nursery school and painted them.

My mother sent letters she had written to her parents in 1938 and 1939. She’d numbered the envelopes. My dad was getting paid 60 cents an hour in September 1938, and working 12-14 hour days. Groceries for them and the two boys cost $25/month. I was on the way and was being referred to as Arabella, although I think they had no idea whether or not I was a girl.

Bob called from Bakersfield Thursday night and we talked for about 45 minutes. I was so tired of his being gone so much and he sounded exhausted. 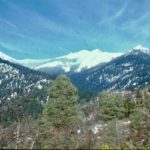 When I subbed at Douglas City I had 20 children (I made name tags ahead of time) until 12:30 when six kindergarteners arrived. Jan Reese, who was the teacher’s aide, was in the 2nd grade when I taught the lower grades in 1962-1963. Back in town by 4:30, groceries, picked up kids. I’d had a nursery school board meeting the night before at Kathy Barne’s house.

Someone broke into the U.S. Forest Service office at Big Bar and stole the files on mining claims. The FBI was called in.

Got a very nice letter from Oliver Burglund last week. “Sure is nice to have someone to talk to about birds.” He said some nice things about a poem I sent him too. Also said he’d been snowed in for 10 days with 4-5 feet of snow and 12-foot drifts around his house.

On March 12th we took the older nursery school children to a music program at the elementary school for an hour. Rebecca’s class played recorders and sang. Jeff’s sang and danced; he wore his cowboy shirt. “Clarke, during the program, yelled at the top of his voice, “ I can’t hear you.” He and Steven Echols were playing some game where they were covering their ears. “I hoped everyone would think he belonged to Rosemary, who was sitting closest to him. “

I was in the middle of the Community Concert Campaign; typing and mailing a newsletter to the Forest Forum members; and trying to get organized to present a plea to the Board of Supervisors for a building for the nursery school that could also be used for small group meetings.

Saturday we all went out to the ranch road. Bob threw rocks out and I cut brush. The children played, gathering Douglas fir boughs to make beds, etc. Ones that I’d cut. We ate lunch in the car. It was cool and cloudy with occasional sprinkles. Sunday, Linda Ohde came to the house and Bob and I went out there. I cut brush from the gate down—got lots done. Bob packed a battery in to the ranch to put in the tractor and brought the tractor out. (I guess to the gate).

The previous Friday Linda took care of the children and Bob and I went to Redding. We ate at Lim’s and then went to the Community Concert—Welsh Male Chorus plus a woman who sang and played a lap harp, and a man who did readings from Dylan Thomas.

Clarke and Jeffrey and I all got poison oak. I knew I was cutting it on our road (really smart with the sap rising) but didn’t expect to get as much of a rash. 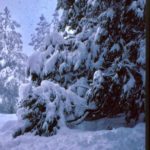 On St. Patrick’s Day, March 17th, we had about a foot of snow on the ground. I made a presentation to the Board of Supervisors to ask for funding for a nursery school room. They agreed to put it in the next year’s budget. Friday I met with Bob Gravette and George Files to go over our needs for a room. I’d made a sketch (to scale) the night before. One of the secretaries ran off ten copies of the sketch and the estimates.

Saturday Bob went out and put oil in the tractor. It was cold and stormy. Sunday we all stayed home. I left the car at the bottom of the driveway that afternoon. Got quite a few new memberships for the Community Concert that weekend.