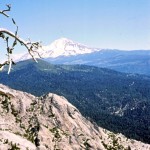 Looking north from Castle Crags, up the Sacramento R. valley.

Going back through old photo albums often leads to going back through memories. I’d almost forgotten about the newspaper columns I’d written in 1955, during the summer before my senior year at Dunsmuir High School. Dunsmuir was a railroad/logging community perched in the upper Sacramento River canyon. This was before winding and narrow Highway 99 was replaced by the I-5 Freeway, a creation that made travel easier but changed the character of many towns along its path. During the 1950s a roundhouse along the river was still used to turn engines around and steam engines gradually gave way to diesels. Today, although bisected by the freeway, Dunsmuir still retains much of its small town charm.

When I graduated in 1956 there were about 250 students in the high school, 38 in my graduating class. Living six miles south of town, and with one car in the family, it was difficult for me to find any kind of work. Our closest community, with post office and a couple of grocery stores, was Castella, about a mile away, where two of my brothers and I attended elementary school. I think Castella’s population then was about 200 and many residents had lived there for a number of years so were almost like an extended family to each other.

Thanks to the support of the editor of the weekly Dunsmuir News (I think his name was Chapman Wentworth), and I’m sure my father– then chief ranger at Castle Crags State Park where we lived– I was able to practice overcoming my shyness and learning to introduce myself to total strangers, do a little writing and be published now and then in the local newspaper. I have copies of several different short columns. For the editor I suppose it was good Chamber of Commerce publicity for what the area had to offer visitors.

I would walk up to the camp or picnic site, introduce myself and tell them my purpose, and, if they were willing, write down names, towns, and what they were doing at the park. Sometimes I think the editor would send them a copy of the paper if they wanted it. There are even a couple of pictures that I took.

For me, who had never really travelled much, it was also interesting to learn about the distance some had traveled and what state or country they had come from. Some of the campers stayed as long as two weeks.

The first article is about Memorial Day weekend. “The Castle Crags State Park, just south of Dunsmuir, swarmed with picnickers and campers over the Memorial Day weekend. Some 41 carloads of campers fanned into the woods, stoked up the handy wood stoves provided at each campsite, and soon had the air deliciously perfumed with frying fish, hamburgers and the other whiffs of outdoor cookery.

They fished, hiked, climbed, or just lay in the sun or shade and snoozed.

Picnickers from Dunsmuir and other southern Siskiyou towns filled all the picnic tables, and kids, big and little trooped through the woods, swam in the iced-cold water, or played games in the cleared areas.” Usually there was a brief introductory paragraph and then the names, what they were doing and occupations. At that time many women were stay-at-home moms so often it was just the men’s occupations that got listed.

The occupations are interesting though: Mrs. Morrison is a chemist and Morrison a geochemist (these two were from Eugene, Oregon and another one in their party Nash, was attending law school at the UO); a paper box salesman, a carpenter, an elementary school teacher, an artist for an advertising agency, an assistant shipping master for the American President Lines in San Francisco, a sawyer in a cedar shingle industry, a barber, chief chemist for Spreckels Sugar Company, head custodian in a school district. 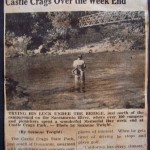 Fisherman near footbridge. (My first name needs an s instead o z ).

More occupations: a high school counselor, a doctor of chemistry at UC Davis, an ironworker, a commercial artist for General Electric, television set repairs and service, machine shop, insurance salesman, Solar Aircraft, McClellan Air Force Base, a post office clerk, an operator for the Cinerama in San Francisco, an attorney, a worker at the Mare Island Navy shipyard.

“The Wednesday Breakfast Club held its weekly meeting at Castle Crags State Park two weeks ago. The members have been coming down from Dunsmuir for three years. All of the members, who have been friends for 40 years, arrived at 8 a.m., ate breakfast and played canasta. “ There is a photo I took and a list of the names.

I remember two of these families who came nearly every year because my parents became friends of theirs, the Cinkes and the Tourys. I think they were related. Mrs. Toury was an expert at Hungarian cooking and taught my mother to make some wonderful pastries. It was their daughter, Shari, whom my father rescued when she was a toddler after she fell into, and was floating down, the Sacramento River near the campground.

“A bearded man and his wife, riding a motorcycle, attracted attention yesterday. They came roaring into the park entrance, rode up Kettlebelly Hill, and took some photographs with his new Polaroid camera. Said the man with the beard (about his beard), “I just let nature take its course …and besides, I’m mad at the barbers.” When teased about the long, curly growth being used as a windshield for his motorcycle (I’m sure by my dad), he said “Well, sometimes bugs get in there and they’re kind of hard to get out.”

And how about this one? This couple was from Berkeley. “Mr. Knudsen made the last splice on the transcontinental telephone line running from San Francisco to New York, June 17, 1914. In 1915 President Wilson opened the World’s Fair in San Francisco using that line. Knudsen, who was in charge of stringing the line through Nevada, was given the honor of representing the West, and so made the last splice. He had just retired from 40 years with PT & T.”