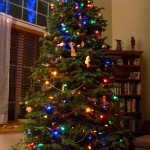 Decorating the Christmas tree is not just putting decorations on the branches. The beads are not just beads. Well, some are. But the important ones are the blue glass beads that were my mother’s and her mother’s before that—real glass and fragile. The others are nice, but can be readily purchased and are plastic made to look like glass. And the blue glass beads are the memory 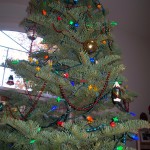 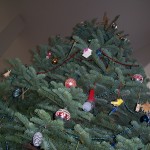 And the glass birds? Those also were my mother’s and her mother’s. And they are extra fragile. This year only one of them still has the white tail feathers. I’m not sure what they are made of but they have a tendency to fall out and get lost. Evidence of past attempts to retain them show in the dried glue around the openings. When I was growing up each of my three brothers and I claimed one of these birds as 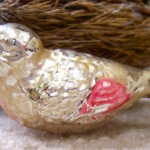 OUR bird. A few years ago I gave the red one to my brother, Peter, because I remembered that one had been his. He remembered that too. I’d have given my two other brothers their birds but I can’t remember which ones belonged to whom, not even my own. Just the red one that was Peter’s. 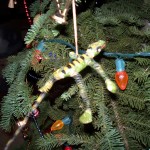 is the alligator. I have no idea how that came to be one of our childhood tree decorations but it was. It’s green, with springs holding each leg, and on the tree it jiggles about if touched. Very fond memories of the alligator. I probably ended up with the Christmas tree decorations because our mother lived her last years nearby. I’d select a few decorations to put on her tiny tree in the assisted living studio apartment though never certain, as time went on, that she could actually see them because of macular degeneration. She seemed to appreciate my effort.

During my youth, on Christmas Eve, after the stockings were hung, we’d sing Christmas carols, accompanied by our dad on his accordion. Usually there would be walnuts, in the shell, an orange and some small presents filling the stockings in the morning. We didn’t have a lot of presents under the tree but it alway 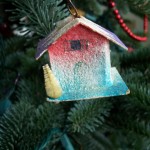 s seemed like a lot to us.It was c 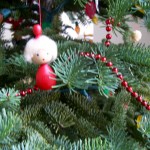 ertainly enough for those years.

For my own family, along with the usual glass balls, I began to purchase decorations from a catalog that had items from other countries: bearded elves; delicate angels; a tiny baby with a red and white blanket in a half-walnut shell; flat tin soldiers about six inches high; a small set of brass instruments; glass icicles (ten I believe, and now there are seven). I think they were from Santa though –elves must be international. As the children grew, and began to help with the tree trimming, some of their homemade creations began to adorn the branches.

Putting decorations on the tree isn’t just something to be done. Not for me at any rate. Some 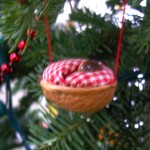 times I like to have music playing, sometimes not. But, at my current age, it’s not a time for chatting or distractions. In some ways it’s a ritual, a meditation, a measure of the passage of time, bringing memories of my growth from childhood to being a parent, and now a grandparent–one year after the next, beads on the string of time.