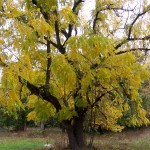 A few months ago this tour was scheduled but then cancelled due to smoke conditions so today I was eager to go even though it was raining. We were a small group, seven plus three representatives of The Nature Conservancy. The gathering place was in front of Friends of Buford Park and Mt. Pisgah’s native plant farm. 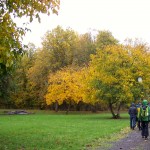 I came well prepared for the weather with down vest, rain jacket, poncho, rubber boots, and rain hat. Then, of course there was my daypack that goes everywhere with me and a fanny pack with small camera. It’s been my experience that trips designed to inform are usually fairly slow paced and I wanted to stay warm and dry while learning.

Our destination was the old gravel ponds along the Willamette River on the east end of Mt. Pisgah (Howard Buford Park), a 2,300-acre regional park. The land here is embraced 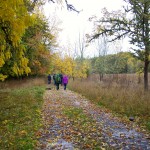 by two branches of the Willamette– the Middle Fork and the Coast Fork– and the area has provided gravel for everything from cement to roads for many years. Because of the location there has been local support for trying to purchase land here and to rehabilitate it in conjunction with the park. Certainly within my time since moving to the Willamette Valley I’ve been aware of those seeing its potential and that was over 20 years ago.

Eventually the land owners were willing to consider an agreement and today the land is under the jurisdiction of The Nature Conservancy but it took the work of a number of agencies, as well as the owners, to bring it this far. And our group was going to see wh 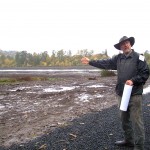 at is being done. The only way to access the property now is by going on a tour although the long-range goal is public access of some sort.

Years ago much of Buford Park, known mostly for its 1,516- foot Mt. Pisgah and including the non-profit Arboretum along its western edge, was orchards and farmland. Today I learned that part of the farms included hops and that Native Americans used to come and camp nearby to he 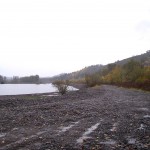 lp with the hop harvest. Other crops included apple and walnut orchards. As we walked along one old road we enjoyed the bright yellow laciness of the leaves of black walnut trees.

Our docent carried a map that showed the gravel ponds as large rectangles, one nearly a mile long, and we were able to see, in person, how they hav 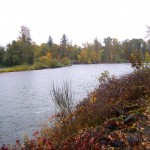 e been changed. In order to extract gravel along the river a dike would be built and the river moved out of the way. This spot was a prime example. We saw the river rushing by between rocks built up on the far side and a wall of rock on this side. The pond is no longer a rectangle but rounded with sloped sides, and a shallow area in the middle actually marks where the edge of the river used to be.

We were told that the contractors who are re-configuring the ponds are able to make changes in elevation down to one-tenth of an inch—they are artists with their dozers. The goal is to ha 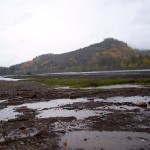 ve benches built up to various levels so that when the river floods, water passing through here will be good for the plants and wildlife, including fish, that will depend upon the protection of this side channel for survival. Another docent, Melissa (actually an employee of TNC), explained that her charge is the planting of native species and she said they know what it takes for the various plants, from sedges to cottonwoods and willows, to thrive. Clusters of small logs and debris are anchored at strategic places in the ponds to act as resting places for turtles that will be nesting on some of the rehabilitated flats along the banks. For instance, western pond turtles nest in grassy areas along ponds but their young need to get to water to be safe.

We hiked for somewhere close to three miles round trip. I hiked most of the return trip with Gardiner, Volunteer Program Specialist with TNC. Afterwards, as I sat in my car drinking from a thermos of hot tea, I realized that when there is a tour to another part of this area, I w

ant to go. On my way home I stopped at a farm stand (Me and Moore) to pick up some of what is probably the last of the corn and squash and to admire the pumpkins. I purchased pumpkins at a different farm this year but love looking at their display.