Last weekend my daughter and grandson and I took a short hike on Mt. Tabor in Southeast Portland. The 190-acre park is an extinct volcanic cinder cone that rises about 400 feet above the surrounding area for an elevation of 636 feet. The name refers to 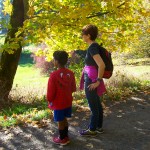 Several reservoirs, originally established to supply water to the city, are important features of th 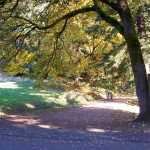 e park. A little one up on top is covered but the 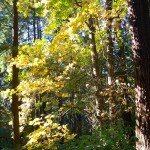 others form small lakes on the slopes of the mountain. The first reservoir was built in 1894 and two others in 1911. The water comes 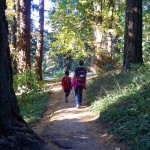 from the Bull Run River watershed, 25 miles away.

Three trails—color-coded with red, green and blue– wind around the hillsides, the longest being three miles. We parked in a crowded 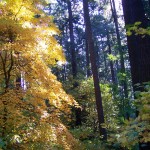 parking lot near the reservoir that has a turret type tower on one edge. I told my grandson that it looks like a giant chess piece, a rook or castle.

It was a beautiful fall day and many people were out enjoying the sunshine and autumn colors. Yellow was the dominant foliage, mostly big-leaf maples. The contrast of the deciduous trees with the Douglas firs lit up the forest. My grandson and I spent some time trying to toss dry, winged maple seeds into the air and watching them twirl, helicopter fashion 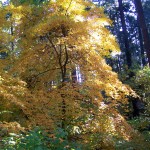 , to the ground. He wanted to see them on the trees but most had fallen. Finally I found a cluster of seeds still on a tree and we could see that they are paired together, each set looking a bit like a moth with wings.

When we reached the summit we could see across Portland to the west. I took some pictures of a statue at the top, a bronze casting of Harvey Scott, editor of the Oregonian newspaper from 1865-1872 and from 1877 un 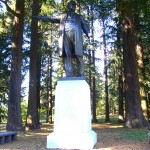 til his death in 1910. The sculpting is by Gutzon Borglum and was done while he was working on Mt. Rushmore. It was cast by Kunst Foundry in New York.

The park is closed to motor vehicles all day on Wednesdays and from 10 pm to 5 a.m. the rest of the week. 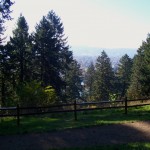