We were back in Auckland for a couple of days before heading home. This extra time made a nice break from being scheduled because of our tour although it also meant we had to figure 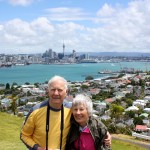 out things on our own. Fortunately we had spent a couple of days in the Auckland area before the trip started so knew our way around.

We stayed two nights in a rather expensive motel whose room had some idiosyncrasies. Turning the lights on required that one first put the room key (card) into a slot. The coffee pot was a mystery as well until we were told it sits on a little independent burner and one pushes a lever down to make it heat. Our room was small compared to those we’d been staying in during our travels. A sign on the mirror told patrons that the smoke detectors were very sensitive and to keep the bathroom door closed at all times “whilst” showering.

On the plane from Dunedin to Auckland we had found that all food and beverages cost $3-$4 minimum. Tom had squirreled away some food from various places during our trip and had a box of juice and crackers and cheese from the big box lunch we’d had on Ulva Island plus a muffin, and these snacks kept us going until dinner time.

The next day we rode to the airport in the motel van that picks people up there (motel administrators don’t really like to have you use it this way but……) and bought round-trip bus tickets at $32 each to go to downtown Auckland. We met a Moari couple on the bus who had a 7-week-old baby boy with them and they said they had older children at home. They told us about a Christmas parade that would begin at 2 p.m. in Auckland and we decided to go. People were lining up at 11 a.m. The parade started half an hour late and we got there half an hour early. It was a wonderful parade though with lots of variety and perfect for children–music, balloons, bagpipes, floats—all with a Christmas theme. There were thousands of people there and we were somewhat appalled at the amount of garbage in t 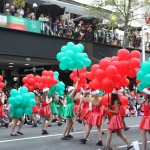 he streets afterwards but there weren’t enough places provided to dispose of trash.

We had dinner at the motel restaurant at 7:00 and met a really nice British couple at the next table. We learned they’d been traveling in a self-contained van that had a wood-burning stove. They own a small boat in England and live where there’s a canal.

The next day we went into Auckland again and decided to take a ferry to Devonport Island (where the Maori couple lived). It turned out that Devonport Island hasn’t been an island for years. It used to be a high-tide island and at low tide horses and buggies would go across 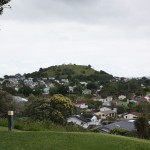 a little strip of land. There used to be three small volcanic cones forming the island but the top was taken off one of them to create fill. Half of the fill is a golf course now.

When we got to the other side we got on a little bus for a tour of part of the area (the ferry boat and the tour were a package deal–$35 per person). The guide gave a brief history and pointed out places of interest. Most of the homes were historic houses with delicate hand-carved “lacework” (gingerbread) along the edges of the roofs. Many had corrugated steel roofs. We saw a starling going into one of these. 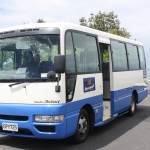 The wood of the original houses was kauri and had few knots. It lasts a long time. Owners can change the inside of the homes but not the outside because of being in a 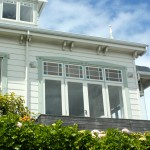 historic district. Devonport was established as a boat-building community and also had a number of masons. The town has a naval museum. Some of the buildings on the north facing slopes are worth millions. The climate is mild. People open windows for cooling sea breezes. Buildings are painted every 15-20 years. Children learn to sail as part of elementary school classes in Devonport and there are four elementary schools serving children 5-10 years of age.

These hills were used by Moari for defense. In the late 1700s one tribe defeated another from one of them. The original name of Devonport was Flagstaff. During the “Russian Scare” (a time in the 1880s when the New Zealand populace was afraid Russian was going to invade) they put a canon on one of the cones and used the other for communications. Flags would be raised identifying incoming ships and the length of time it 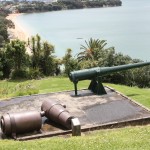 was expected to take for the ship’s arrival. A 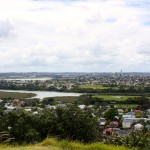 t least one of the canons was the kind that is located in a hole and then raised up to be used. We went up on the fortification hill, Mt. Victoria—where underground structures, a bunker etc. date from the Russian Scare time.

The top of Mt. Victoria is decorated with colorful, large, red and white mushrooms, which are actually ven 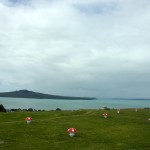 ts for the water reservoir located in the original crater of this little volcano. The Signalman’s quarters is used for writing workshops.

Volcanic material has been used for various walls that were built with picks and shovels. One side of Devonport is much warmer than the other and they can grow lemons and grapefruit. The town can get as much as 50 inches of rain a year. Water sinks rapidly into the volcanic material. The most recent eruption was on Rangitoto Island, which we could see off the coast. This island is about 6,700 years old and last erupted 200 years ago. 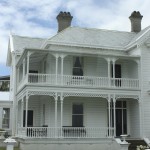 Big Bay contains 47 islands. Ships coming in need pilot boats because the passage is narrow. The Royal New Zealand Navy has a base here. Devonport is like a suburb of Auckland
with may people who live here commuting to Auckland for work.

The beach areas on Devonport Island are called the Queen’s Beach as there is public access to all beaches. On Cheltenham Beach the tide goes out hundreds of yards. In the old days there were dressing rooms on the beach and they had to be moved back and forth as the tide went out and came in. It was a popular swimming area then. The original building still stands and is the only house actually on the beach.

The United States and New Zealand had cooperative efforts here in WWII. There was a jointly owned hospital. The barracks are just now being removed.

Back in Auckland we stopped at a store we had seen the day before, when it was closed, and purchased some hats. We bought subway sandwiches and took them back to the motel to have for dinner. By skipping dinner we pretty much paid for the ferry and bus tour. After dinner I did laundry, which was only $2 for the washer and $2 for the dryer.

It had been a nice day, overcast a lot, some sun, and a few sprinkles.