Riding the ferryboat from Stewart Island back to the South Island I entertained myself by reading, and jotting down, information posted on the boat for passengers to peruse. Additiona 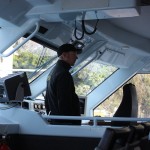 l information that I have looked up appears in italics.

2. Stewart Island Experience and its parent company, Real Journeys, are recognized as one of the New Zealand tourism industry’s highest achievers on conservation matters.

3. 85% of the land mass is protected within Rakiura National Park.

4. Population of Stewart Island is about 400.

5. Fuel efficiency on ferries increased by 5-6% using a new non-toxic siloco pre (a sealant) based anti-fouling product on hulls.

7. Recycling on ferries is standard procedure.

8. The ferry company has contributed $40,000 over the past five years to assist the Department of Conservation in studying the rare Stewart Island gecko. The Harlequin Gecko became known to science in 1981 and is one of the world’s most endangered- 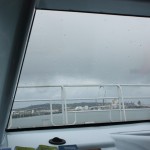 (probably the southernmost member of the gecko family worldwide).

9. Heavily discounted rates are given to scientific and conservation groups.

12. Rakiura is the Maori name for Stewart Island. It translates as “Land of the Glowing Skies”.

13. Tiawai Point Aluminum smelter produces 340,000 tons of the highest grade with an export value of $1 billion. (I was a bit shocked to learn this) According to Wikipedia this is the only aluminum smelter in New Zealand and one of the 20 largest smelters in the world. Most of the ore comes from Australia and the finished product goes mostly to Japan. It is believed that a primary reason for locating the smelter in New Zealand is because the Manapouri Power Station and the smelter were constructed at the same time as a joint project. The smelter uses about one third of the total power of the South island and 15% of the total power of the entire country. The present cost per kilowatt hour is one quarter of the price charged to the domestic consumer. It does rank in the top 5%, worldwide, for having low carbon dioxide emissions. 20% of the company is owned by Sumitomo Chemical Company of Japan. “It is one of two companies in the world that produces ultra high aluminum and the only one using electricity generated from renewable resources.” The company blames high cost of electricity (transmission costs) for its recent downturns.

14. Rapuke Island, one of the southernmost islands, had seven Maori villages in the 1800s and was home to most of the Maori population in the Southland.