Life continued to have daily living events:
Rebecca had a 10th birthday;
Jeff stayed overnight at Florence and Leonard’s to play with Kent;
Jeannie Meyer gave us three- dozen eggs from their chickens. She and Robin went on a backpack trip even though she had the same miserable germ that I had. 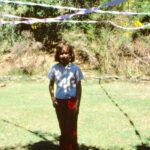 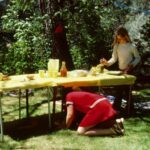 But for several summers the main focus in our lives was on the construction of the bridge. This wasn’t just a bridge- it was a legacy, and I’m sure a one-of-a-kind. It was truly an amazing accomplishment, but there were costs involved, besides the financial ones. There were also lessons learned and character that was built!

Apparently I’ve misplaced the journal that described building the first abutment but there are slides that record the entire project from beginning to end. The whole process would take a book to describe so I’ll mostly be hitting the high spots, and of course mostly from my viewpoint. There is no way I could separate myself out far enough from my daily living to give an accurate description of all that was involved.

Little French Creek’s steep, rocky canyon access always seemed to “want to be a trail” as Bob said, more than once. We had four miles of road, originally put in as a logging road, to maintain. Trees and rocks fell, rock slides occurred, all the usual things one would expect I suppose.

There was an original log bridge, which washed out in 1965 when we had to access the house on foot, via the one single log that remained. Then another log bridge was put in. Various slides occurred that had to be cleared out with large bulldozers, plus smaller slides that our little John Deere tractor could clear. 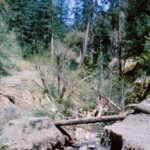 At one point, when my eldest brother was visiting, he noticed a large Douglas Fir on a rocky bluff high above the proposed bridge site and called it to our attention. So Bob somehow figured out the approximate mass of the tree and how much weight could land on the bridge if the tree fell. Plans got revised. After all these years much of that is kind of a blur, although some I have recorded in this diary. 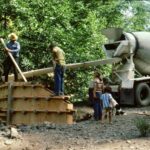 As this narrative begins, the first abutment had already been put in the previous year on the far side of the creek. I’ve not been able to find a description of that and am kind of “winging” it on the order of the slides. I have quite a few pictures of that original abutment and family participants but don’t have many pictures of the second one. The narrative does show the effort that went into it though.

In mid-July Bob hired Eric Ohde and Charlie Jopson to help for one weekend and he was taking the following week off as vacation time.

At 10 p.m. on Friday, the 18th, I wrote that he was still down at the creek working, and the next day a backhoe would be there. He didn’t get up to the house until midnight. The two teenagers helped all day Friday and Larry Anderson, who was going to boss the pour, and Virgil DeLapp, came out to look at the bridge site and also came up to look at the house. 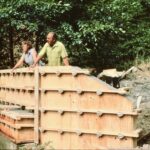 It took me years to figure out that those who achieve great accomplishments probably have a similar focus –scientists, writers, artists, etc. I’m sure some have made room for others in their lives and some haven’t. And some have found the stress of their focus overwhelming. Most probably didn’t have other fulltime jobs to juggle as well.

I had to leave the next day with the children before the cement truck came, or at least have the car out of the way.

Clarke took a bad tumble down the stairs. He had some scrapes on one shoulder but otherwise seemed ok. When I asked him where it hurt he sobbed “All over”. And I’m sure it did.

Florence and Leonard were staying down at the creek with Bob until he finished that night. I stayed up until 1:00 a.m., which was when Bob got home Sunday night. At 4 a.m. he got up and went down to the creek to fill the pump with gas. At 5:30 we both got up. I fixed him a big breakfast and he went down to the creek. By 7:30 I was down there with the car loaded and kids fed and dishes washed. I left the children there and started up the road. Met Bob coming down. He backed up a ways and I parked the VW where he leaves the road drag. Helped him some putting braces on the bin he’d made the night before. The cement truck was supposed to get there between 8:30 and 9:00. Jack didn’t arrive until 9:20. He’d had smoke coming out of his brakes coming off Oregon Mountain, so had stopped for a while. Larry Anderson, John Scott, and a helper had arrived around 8:30. I started walking to the car with the children (hadn’t wanted to meet Jack on the way out) and saw one loader scoop of cement go in. We just barely made it into town for the children’s swimming lessons, which were at 10:30. 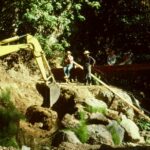 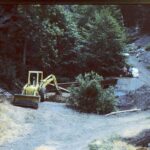 The children saw Jack’s cement truck go by while I was in the grocery store, around 11:30. In town now, I made another batch of root beer, did laundry and tried to call Bob. I’d left a sandwich for him at the ranch for lunch and some leftover spaghetti. I finally reached him around 1:30. He was going to eat lunch and then take a nap. He said the pour had gone well.

I got my hair cut, took Clarke to stay overnight at Florence and Leonard’s, fixed a sandwich type dinner. Called Bob again and finally reached him at 9:30. He’d gone to Big Bar for a milkshake earlier.

Tuesday there were swimming lessons again. I went to a Board of Supervisor’s meeting and found they’d already dealt with my issue and $3,000 had been set aside in the budget for a nursery school and small meeting room to be added on to the recreation building. Had a good visit with Doris, taking advantage of having Patty Forero at the house with the kids. Took Patty home on our way out of town but had to go back to get Bob’s shaving kit. He’d already started a salad and we ate the spaghetti I’d left for him.

Thursday there were more swimming lessons and Clarke had to jump off the diving board. He was scared but he did it. I’d left the car at the service station to be lubed and walking back we met Barbara and Karen Austin and Christi McChesney. Barbara invited us to her house for a cold drink so after I got the car we did that. It was a really hot day so much appreciated. We watched the Apollo splashdown from there.