Killed a little rattlesnake near the mint patch when I went out to get a sprig for my iced tea. Looked for a shovel and couldn’t find one so whacked off its head with a splitting mall. It was rather pretty and innocent looking except for that diamond-shaped head and the single button on its tail.

Wednesday night I helped Bob get the pump out from near the creek. We went down around 9:00. Took the children of course. I ran the boom truck while he did the tying, etc. We lowered it into the trunk on his car. Got home and I was just getting the children ready for bed when my father called. My eldest brother and his wife were visiting them. Clarke started bouncing on the bed and fell off but fortunately Bob got home and headed up the stairs about then. So it was after 10:00 when the children got to bed.

July 30th, a Wednesday, Bob called from Utah. He was going to Idaho that day and would be home the next night. I’d taken the children to Weaverville Monday for swimming lessons and the whole family, including Bob, had gone to the pool for half an hour that evening.

Tuesday, after swimming lessons, I’d gone to Florence and Leonard’s and picked some vegetables. Then went to Hal Goodyear’s to give him a request from Bob and up to the Wood’s to leave a list of steel for Herb. Much cooler that night so we could have all the windows and doors closed and have a fire that morning.

We went up to the top of the meadow where I cleaned the bathtub-settling tank. Clarke and the dog and I continued our walk around the loop but Rebecca and Jeff went back to the house where they started making chocolate chip cookies. In the afternoon I cleaned the pool and mowed the lawn. I had purchased a badminton set and we put it up that afternoon. The children and I played for about an hour, practicing. Even Clarke did pretty well. He could serve much better than I thought he would. After dinner Rebecca and Jeffrey played until nearly 9:00. Clarke got frustrated with it so I got him in the shower and read to him and had him in bed just before they came in.

Sunday evening Bob went to the cellar and got buzzed by a rattlesnake. He called me and asked me to poke at it with a long pole — it was curled up on the rock shelf right near where he was reaching. All I did with the pole was cause the snake to crawl away so “I guess we still have a snake under the house.” Got thoroughly mosquito bitten in the process.

I looked in the generator relay box and found four little light -beige eggs with brown spots. The wrens were raising another brood!

August 4th –Monday
On Sunday Pat Powell and her daughter, Irene Nunn, and Linda Ohde came out. Doris and Dave were up on Hayfork Bally and Eric and Charlie had left for Canada. Linda was going to stay at home by herself. They stayed for lunch and then left, leaving Linda with us. 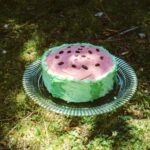 The previous Friday we had a birthday party for Clarke in Weaverville. He had a watermelon cake with green frosting on the sides, pink on top and raisins for seeds. The children unwrapped presents, ate and ran through the sprinkler. (Guests included Stephen Echols, Michael Little, Amy McClurg, Molly Simmons, Robin Meyer (for Rebecca). Jeff must have been elsewhere? 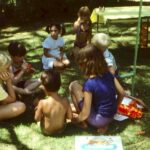 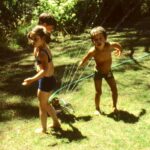 Sunday morning I helped Bob down at the creek for a couple of hours. Took nails out of some boards and cut corner moldings and hammered them in the form—a yucky job because there was no room around the rebar to swing a hammer. Today I worked down there for most of the day with time off to go home and fix lunch and take it down. We had cucumber sandwiches, with cucumbers from our garden, carrots from Florence’s garden, lemonade and watermelon. We’re getting tomatoes, lettuce and summer squash and green beans. I was cutting with a hacksaw and shaping rebar, making two bends at the top and curves at the bottom, called stirrups. Went into the creek a few times to cool off.

Jeffrey spotted a rattlesnake by the creek after lunch and Bob pinned it down with a shovel. I took the crowbar and smashed its head. He cut off the rattles for Jeffrey.

Linda took care of the children a lot today. She is really a good person to have here. Does lots of imaginative things with the the children, is interesting to talk to for me also.

Am starting to read Margaret Meade’s “Blackberry Winter” again. Bob leaves tomorrow from the Weaverville airport around noon. He’ll be back Thursday.

Candie and Carin plus me with my three hiked into East Weaver Lake.They arrived at our house around 5:30. I barbecued a chuck roast outside. It was delicious but we didn’t start eating until 7:30. At that time I went over o the park to leave a sketch with the park board. The children didn’t get to bed until 9:00 and Candie and I not until 10:30. They had a very cute, three-month old puppy with them named Chelli.

I noted that she really seemed to need to get away from Willows and that I had enough food, etc. for all of us. They had their sleeping bags and a stove though. Rebecca needed film and Candie needed to drop her car off at Miller’s so we did that the next morning. I had to get dog food for our dog and leave it at the house so Lawrence Forero could feed our dog while we were gone. Candie’s puppy was going with us. And we didn’t pack until the morning of departure.

The VW van did fine going up Weaver Bally road; just a little spinning. When we got as far as the spring we saw Dick Morris’ truck parked there. We drove up as far as the trees where Linda Ohde had said there was a good place to park, turned around and parked there so we were facing downhill. A little before 1:00 we were sitting by the lake eating lunch. 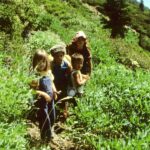 Jeffrey carried his and Clarke’s sleeping bags and pads. Rebecca carried all her things and Clarke carried his bushbaby and a change of clothes. Carin carried her doll. 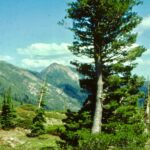 A snow slide of some sort had partially filled the lake and broken off some trees. It wasn’t nearly as pretty as it had been when Rebecca and Jeff and I had camped there three years ago. Thick mud lay on top of the snow and ice which floated, along with fir needles and logs, from one end of the lake to the other, depending on how the wind blew. Still, it was a nice setting.

The children found a windfall up on a rocky point where they wanted to sleep. It was some distance from the lake though so we went over to check where the small stream runs in. It was a pretty spot—shooting stars and heather blooming. We met Mary Figarton and her daughter, Lauri and friend JoAnn. We talked with them for a while and then went back to the windfall. The wind came up and we could see big thunderheads off toward the valley. We hauled water for dinner and then had a brief visit from Dick and Sandy who were on their way out from Rush Creek Lakes. They left us a bottle with a good sip for we two adults. (We found out later from Brad Miller, who we met on the road, that their truck battery was dead when they got to their vehicle and they had to hike up to the lookout to summon help.) 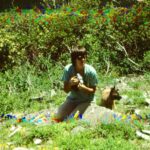 It was cold that night. We didn’t even wash dishes but went right to bed shortly after 7:00. I didn’t sleep at all—too cold. Candie even traded sleeping bags with me but it didn’t help for long. Everyone else had insulate pads but I had an air mattress.

We had to break ice on the lake in the morning to get water. The children really seemed to have a good time. Thursday was Clarke’s actual birthday. He was a little concerned about no presents but Candie organized a surprise party for him—everyone popped up from behind a rock saying “surprise” and sang Happy Birthday. He was presented with flowers, sticks and rocks. Both legs on his pants were ripped and I cut them off into shorts with a pocketknife. I sewed up a hole in the rear with needle and thread. Jeff had his cook kit, which we used with ours, and his coonskin hat and was off on many adventures while Rebecca and Carin were a little more family oriented in their play; Rebecca making doll clothes out of the legs of Clarke’s pants. 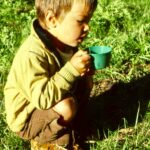 The hike out went quickly and Rebecca and Jeff walked rapidly. Once we got them to wait for Clarke who was trying desperately to catch up, and Carin—all four made rapid progress. We ate lunch by a small patch of snow near the top of the ridge. Had snow, water (which I carried up from the creek in a plastic jug) and powdered lemonade mixed. The little dog had to be carried about the last quarter mile because its feet were so sore. Candie walked with the children down to the spring while I walked up to get the car.

I showered and washed my hair, put stuff away and was about to go buy groceries when Jeffrey stepped on a rusty nail. Fortunately Bob came home about then and I asked him whether he could take Jeff to see Dr. Nielsen, which he did. I took the others to get groceries and stopped at the pharmacy where I also got Clarke a pair of sunglasses for his birthday. Went home and fixed a birthday cake for Clarke and we had hotdogs and salad for dinner.

Found out a few days later from Doris Ohde that, the night we were at East Weaver Lake, a very rapid cold front had come through. Helen Gravette told Bob it got down to 36 degrees in the East Weaver subdivision. No wonder we froze up at that elevation!