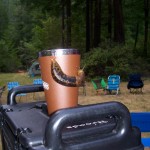 Breakfast greeting from a banana slug 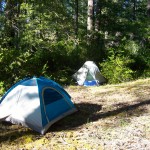 My tent in background

My tent was snuggled cozily between some shiny-leafed huckleberry bushes in a dry meadow, shaded with a scattering of Douglas Fir, tan oak, and a few lodgepole pines. Below the camp ran Hurdygurdy Creek, not visible but maybe a tenth of a mile away. My car was parked a short distance away. The location? Along the Smith River (Smith 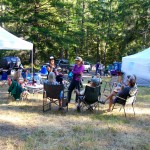 Hurdygurdy Creek, incidentally, is a prime salmon and steelhead producing stream. “A hurdy gurdy is generally thought of as an instrument, but in this case hurdy gurdy refers to a water wheel with radial buckets driven by a jet for use in mining.”—Smith River Alliance. 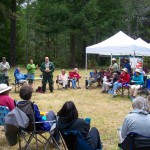 Last year I went to a Broadwork in Idaho (my first project with the group) where we spent four days surveying sage grouse habitat. We worked four days and hiked on one day. The Broadwalks involve more hiking but also include one day of work.

About 30 women and several men arrived last Thursday, many from California and Oregon but also some from Colorado (Broad headquarters location), Utah, one from Maryland, and one from Main. I knew two from the Willamette Valley and discovered that two others had been in Idaho last year. Dinners and breakfasts were provided as part of our cost but we supplied our own lunches. This was a primitive campsite and had porta-potties, no running water—a large tank of potable water was available—no showers and, being down in a canyon, no phone service. It did have a plentiful supply of mosquitoes though.

We all brought folding chairs and I took a nice collapsible aluminum table that I shared with whoever else wanted to sit next to it. There were no picnic tables. But we were there for a purpose, not the amenities!

My eldest son, Jeff, arrived that night from Weaverville in time for Happy Hour and dinner. He would stay two nights before heading for home. It was great to be able to visit with him and see 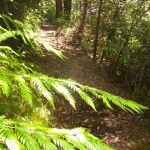 him in action, participating in one of his beloved wilderness projects.

After breakfast on Friday (Breakfasts began with coffee ready at 6:30 a.m. and food at 7:00. And I should mention that the meals were delicious and food plentiful.) we took several cars to the Kelsey Trailhead to begin a brushing project. Another group had gone to a different trailhead and still another remained at the campsite where they built a fire pit from local rocks and cleaned up a nearby campground, its initial cleaning for the year. Jeff and Joe G. were our trail leaders and we were soon attacking dense huckleberry foliage and some tan oaks, all beginning to overwhelm the trail. One treat along this trail was the view of a number of Port Orford Cedars. Such a beautiful tree. 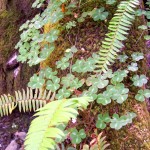 What a difference we made in that short stretch of about a quarter mile! That doesn’t sound like much on paper but major clearance, and in the heat, was a chore. So many trails need attention and this one needed a lot more but we did what we had time to do. 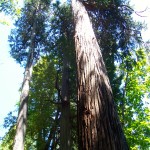 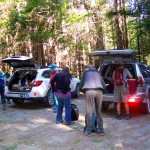 The original Kelsey Trail followed a route used by Native Americans and went from the Smith River (named for Jedediah Smith, an early explorer) into the Siskiyou Mountains. In 1855 Ben Kelsey was hired to build a trail from Crescent City to Ft. Jones to allow supplies to be transported to the Fort. Other branches of the trail extended to Scott Valley, Yreka and other places in that area. Mule trains carried the supplies. Apparently Kelsey had a bad reputation :
https://www.google.com/search?q=kelsey+trail+on+smith+river&ie=utf-8&oe=utf-8#q=Ben+Kelsey+founding+father,+indian+killer

As it got closer to lunchtime we headed 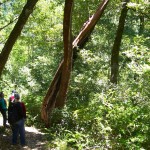 down the trail, clipping only now and then,  and dodging the now common poison oak. In some places the trail was quite narrow and we could see the South Fork of the Smith River, emerald green below us. We stopped to cool off and eat lunch at Yellowjacket Creek, enjoying the sound of water runn- 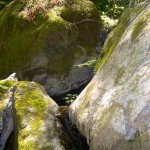 ing through moss-covered boulders beneath Big Leaf Maples. From there it was another half mile down to the river. Here there was a wooden shelter and the nearby roaring falls of Buck Creek, a great place to pause and appreciate. Just before reaching the shelter we were treated to a view of lavender Elegant Brodiaea in a patch about 10 feet square. Yel 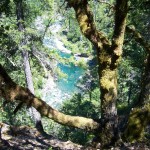 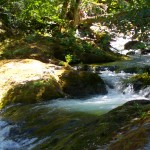 s were flitting over them but wouldn’t sit still for a photo. The trail continues beyond Buck Creek heading into the Siskiyou Wilderness.

We backtracked a bit and went down to the river where most of the party jumped in and swam across, although several of us just submerged in the chilly water. I tried to catch some tiny minnows 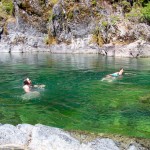 but they dodged. After everyone had a chance to cool off we headed back up the hill. I soaked my T-shirt in the water before we left and that kept me comfortable most of the way to the cars.

During dinner each group reported briefly on what they had done that day. After dinner that night Ryan H. gave an informative talk about wilderness issues and Jeff assisted with additional information. Each evening included an educational component with guest speakers.

Have I mentioned mosquitoes? There were mosquitoes. I was so glad I’d taken a net covering for my head. Even so spray of any kind was welcome. Yikes!

And so ended day one.