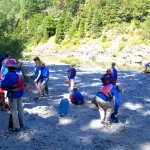 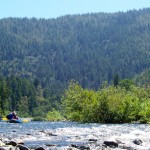 Dipping one blade of the single paddle down into the transparent water of the Smith River, I pull, while pushing the other blade forward overhead, turning my body with the thrust as water runs down the paddle from the first blade onto my wrist. Now and then I get into the rhythm of it and feel a part of the kayak and in tune with the paddler behind me in this tandem craft 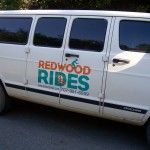 I’ve kayaked on still water (a reservoir, a couple of lakes) before and loved it, but never on moving water and today was my first time on a river. I’d been assured it was flat water though.

About half of our group gathered along a gravel bar at the edge of the main Smith River, our inflatable kayaks supplied by River Rides. It was a beautiful, warm day. Eighteen people and 16 kayaks would make the trip. I was still pretty nervous about possible rapids and when Carol suggested I might want to go in the tandem kayak with her husband I jumped at the chance 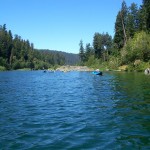 . Both Carol and Kirk are experienced kayakers. Her offer meant I could relax and enjoy the trip, while at the same time paddling and participating.

We were soon outfitted with waterproof jackets (blue) and life jackets. I sat in the front and Kirk would do the steering. Now and then I’d ask which way we were heading when there were rapids, and there were a few, although nothing overwhelming, just enough to be fun. I’d been worried about hearing aids but decided to leave one with the vehicle just in case I spilled. I got wet but just from going into rapids and my head stayed dry. The outfitter didn’t accompany us but we had enough experienced kayakers in the group so it wasn’t a problem. He and his assistant had a kayak race to get to.

In a few minutes we had dry-bags stuffed and were off. Such a beautiful river! Big, deep pools, emer 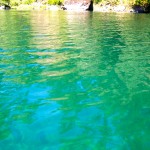 ald green and clear. For the first hour we really took our time, just paddling and drifting and enjoying the experience. When there were rapids we slowed down, gathering at the end to make sure everyone got through with no mishaps. A couple of times the water was so shallow that some people got stuck but usually could maneuver out with no assistance. Kirk got out of our kayak once to go back up the rapid about 50 feet to shove a paddler free.

There wasn’t a lot of wildlife visible but we saw a female merganser with young ones, some sandpiper types of birds, and crows. There were wildflowers scattered along the shores—azaleas and near the takeout spot some tall tiger lilies. Of course there were redwoods growing on both sides of the river—we were traveling the artery of the redwood forest, dark trunks with green crowns towering above the water. 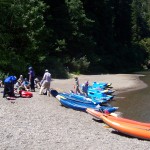 At lunch time we pulled in to a gravel bar at the mouth of Mill Creek. Another group had just left and there were tourists sprawled out in the sun who had hiked there from the Stout Grove in Jedediah Smith State Park. We ate and chatted and then, leaving one person to watch our belongings, waded across Mill Creek and scrambled up the bank. Here we made our way through a maze of horsetails (equesitum) and into the redwoods of the Stout Grove. The only time I’d been here before was when my father was a ranger at the park from 1957-1959, and, at that time we rode in a car to get to the grove. –That first summer I cleaned motel cabins in Hiouchi (the tiny community across the highway from the park entrance) in the mornings and swam in the afternoon to wash it all off. I started my second year of college that fall. –Even with all the people walking awestruck through th 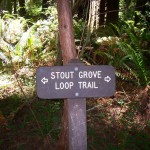 e forest, the scene was magical, sunlight slanting between the large trunks and filtering through the needles. One youngster, who had scrambled up on a large root wad, about 15-20 feet above the ground, called to his father, “Now you come up here and I’ll take your picture.” 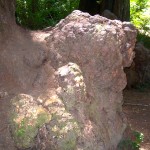 Back at the kayaks we put on our life jackets and began to travel again. We paddled down to the Day Use Area of the park and pulled to shore again. This was a 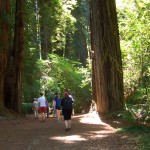 familiar sight—this was where my younger brother and I would swim across to the rocks on the other side. Some of our group wanted to stop for the day, others to go on. We were only about half way because we’d taken our time. There was still another two to three hours ahead of us although we’d go faster. We finally decided to stop here at the half-way point and I realized that actually I was fine with that. I’d thought I wanted to keep going but that would be a lot more paddle time and we’d be worn out and late for dinner. As it was, our leader called the company and they said they’d 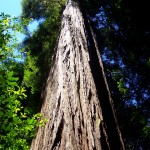 pick us up below the bridge, just a short distance further down stream. It would still take time to take our drivers back to their cars and the cars to pick us up 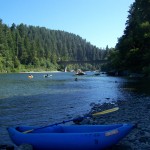 so it was a good decision.

After dinner that night our speakers were the grassroots leadership director from Great Old Broads, and Mary Ellen Hannibal, author of “Citizen Science”. Mary Ellen is from San Francisco but was there with her husband and two children. Her son has attended the Bar 717 in Trinity County. I’m always amazed at how common interests can bring together people from many parts of the west. Such a good day!