When I reached the parking lot and started down the road, a man flagged me down and asked for a ride back to near Lake Eleanor road where he’d left his wife in their car after running two tires into the ditch. He was worried that she might panic with him gone so long but it seemed to me that he was the one in a panic. He was sort of an older gentleman (whatever that meant at my age) and I nicknamed him “Joe L.A.” Dark glasses, slacks, sports shirt, nervous cigarette, big car. “I thought I’d be more tolerant after my trip but found myself less so—it was a strain to be polite.” After I dropped him off I met a jeep coming up whose driver was going to try to pull him out.

When I got to town I called Bob, cleaned up, put away things and headed for the ranch. When I got there it was back to reality. Of course I was really tired so things seemed magnified. Bob had spent the previous two hours looking for car keys so dinner had yet to be fixed and it was around 7:00. The children were dirty and hungry but eager to show me the dollhouse their father had built for them. He fixed a salad and we had canned spaghetti for dinner. After we’d eaten I took Clarke’s shirt off to swish him through a bath and saw that he had a rash—a bad case of poison oak. The caterpillars were out of food and the garden hadn’t been watered. Rebecca and Jeff got leaves for the caterpillars.

If I’d been a bit more mature I would have been grateful that they were all still alive, seemed to have had a good time, and their father had also survived. But that came a little later.

I was really sore and stiff and blisters were painful. That plus Clarke fussing from the poison oak itching meant not much sleep that night. Monday Bob brought medicine from in town that we’d used the previous summer to help with the itching. They had drained the pool while I was gone but hadn’t cleaned it so the bottom of the pool was littered with dead bumblebees and the walls coated with a film. By Monday evening after I’d done three batches of laundry, cleaned and filled the pool, “I was more optimistic”. 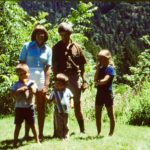 My eldest brother Ben, called from Corning that evening. He and his wife were arriving around 11:30 that night. We talked for an hour after they arrived and then went to bed, with them sleeping in sleeping bags out on the front porch. After breakfast on Tuesday we walked the loop. I hadn’t seen him since Clarke was about 16 months old. This was the first time we’d met Pat, his second wife. The children spent their time going from lap to lap. Ben was entranced by all our water. He ran sprinklers, mowed more of the grass around the barn, unplugged the drain, which had been full of grass roots, so that water from the lower spring would run under the apple trees. They left around noon on Wednesday. They’d moved from the Seattle area to Pennsylvania where he was teaching. 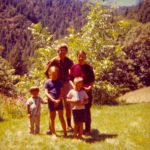 Thursday we went into town for dental appointments for the boys and to run some errands. On the way out of town we stopped to see Florence and she gave us chard, lettuce, squash and raspberries. We made one quick stop at the Woods for a quick dip in their pool and then dry off in their sauna. On the way out to the ranch we ran into heavy rain and hail along the river- “came down in great silver splotches that shown in the sun and splattered against the windshield”. Lots of thunderheads around during afternoon.

One of the caterpillars hung upside-down the night before and by this evening was a lovely green chrysalis and a second one was upside down. 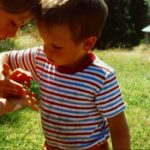 On Friday I got up early and fixed breakfast for Bob. After the children and I made a raspberry pie, from Florence’s raspberries, I’d changed beds and tried to start the generator to do laundry. It wouldn’t start so I tried the lawn mower to mow and it wouldn’t start. Called Bob and he gave me some suggestions. Got the generator started and laundry going. Cleared the air filter on the lawnmower and it started right up. The children spent most of the day playing with the little pottery animals that came with boxes of Red Rose Tea. They used a small plastic doll for Mowgli (I’d been reading the Jungle Books to Jeffrey.) After lunch I hung up the three batches of laundry; cleaned the bugs out of the pool and kicked for five minutes. Got the lawn mower going again by adjusting the fuel mixtures screen. Mowed the orchard with one stop for a swim and one to refill with gas. The children spent a lot of time in the pool.

Big buildup of thunderheads in the afternoon but no storm—quite warm.

That morning, when I was talking to Clarke about how he must take a nap he said, “I won’t have a steric, Mommy, I promise.” I’d told him he had hysterics when he didn’t take a nap. He didn’t get the nap but did pretty well. Talked to Candie for a while. It was Carin’s birthday. 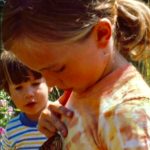 Saturday we went into town to go to Vernon and Ruth’s 50th wedding anniversary celebration), having a good visit with Candie, Jim and Carin before we left the Weaverville house. The reception was really very nice—punchbowls and cake and lots of people—apparently about 60 of Vernon’s clan showed up. Big picture of them on their wedding day—Ruth calm, steady-eyed, capable; Vernon romantic and dreamy. We got there around 4:00 and were there till nearly 5:30. Bob was having a very good time seeing lots of people he hadn’t seen in a number of years and introducing me to many of them. Rebecca got to meet his former piano teacher.

The Asplins were there—Horgans, and others we hadn’t seen in a while. I met Ed Ryan, Vernon’s son, and his wife Ruthie. “I left thinking that I hadn’t been thinking about marriage as a 50-year investment of time and effort; more like ten- year increments. I suppose if one thought at the beginning in terms of 50 years it would mean working a lot harder at it—especially in terms of seeing that each partner was allowed and encouraged to develop to his and her fullest capabilities. We talked a lot afterwards about the various people there, about Bob, about marriage. I am so fond of Vernon and Ruth.”

We stayed in town Saturday and Sunday night. I caught up on chores there, even washing woolen things that should have been done last spring. Children played with friends. We ate dinner at the Brewery—fried chicken and salad. It was under new management and they didn’t have pizza anymore. Two walls of the upper room were covered with a mural of Weaverville. It was quite attractive but not very accurate.

Monday on our way to the ranch we stopped in Big Bar to get ice for homemade raspberry icecream. What wouldn’t fit into the freezer we used to make popcycles.

The children liked to play outside after dinner and that night they had the overhead sprinklers on and got marvelously cool before bedtime. “I was thinking of the childhood memories they will have and wondering if, when they’re all in their twenties, whether they’ll say, ‘and remember those sprinklers up on the roof’?’ I hope they store up lots of good memories because I’m afraid they’ll need them during the difficult times ahead for the world. They’ve certainly had a much more varied childhood than I did already. I think it’s interesting that out of the four of us the three boys and families are the ones that ended up in an urban environment, while I’m in a more park like atmosphere, at least in the summer. (Of course the last 15-20 years it’s been my brother Peter who has been living the rural lifestyle.)

July 29th, Friday—It has been unbearably hot the last two days. The upstairs doesn’t really cool off much during the night. The last three nights I’d been up a lot with Clarke. Sometimes I’d take him downstairs for a cool bath to relieve the itching. It was so warm in the house and for several days much of my time was spent trying to help the children stay cool night and day. Rebecca and Jeffrey slept in the VW bus two nights in a row and Rebecca looked much less tired the next day. When Clarke was in the pool I had to be there too. He went under once when I was there and once when both Bob and I were there. It’s only 2 ½ feet deep but we noticed that when he went under was while holding on to a floatation item. So we took those away. We were going into town for Aunt Nell’s 90th birthday party that weekend.