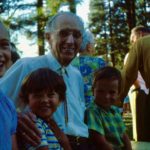 Saturday we went into town for lunch. We were out of bread at the ranch. Bob had left earlier to go to Hayfork to get new boots. He’d bought some earlier in the summer but they were too tight. It turned out that he was able to get the new pair, plus Ernie Glass said he could sell the old pair so he came out fine on the arrangement. 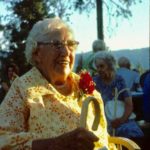 After lunch we went to the library where signing out the books seemed to take forever. We went home and cleaned up a little. Linda Ohde’s parents dropped her off so we didn’t have to go pick her up. After Bob got back he and I went to Gilda Sanders and Hugh Brown’s wedding reception. I was really happy for her. Had a funny conversation with Barbara Simmons before we left.

After we got back to the house Bob took Linda home; I helped the kids change and put shoes on; I changed from pantsuit to dress and then we all went to Aunt Nell’s party. “That was really something!” 200 guests for dinner at Lowden Park with the Women’s Fellowship doing the dinner. The majority were over 60-years old and many over 70. They had a speaker system, which worked pretty well. Florence did a great job with her review of Aunt Nell’s life, her activities and her friends. Several people spoke. “I was afraid Bob would weep about half way through his—he feels so strongly about ancestors and is so fond of Aunt Nell. I really think he can hardly wait to be an old timer himself!” (I tend to assume that those reading my notes know most of the people I mention but: Aunt Nell Pattison, Aunt May Richards, Uncle Stanford Scott, and Uncle Ed Scott were all Bob’s great aunts and uncles, Florence’s aunts and uncles. The family owned the Scott Ranch, which got flooded by Trinity Lake. You can learn more at the Jake Jackson Museum or researching past copies of the historical society’s “Trinity”). Most of the Aunt Nell party pictures were taken by Bob/Robert Morris.

Clarke kissed Aunt Nell’s hand a couple of times, which delighted her. Uncle Stanford got up and said, “And I expect her to come to my 90th in 5 ½ years.” Uncle Ed, who was quite frail, said a few words also. Aunt Nell was so pleased and excited. She got presents and lots of cards. Rebecca made her two cards. Mrs. Rourke was there and insisted on introducing Rebecca to her husband. I saw and talked to Judy Duncan for the first time in ages. She invited us over to swim sometime. 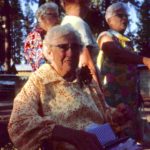 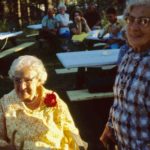 At dinner Uncle Stanford said he’d like to come out to the ranch again sometime as he hadn’t been out there for about 12 years. Bob suggested he and Calvine come the next day. They were staying overnight with relatives in town. So they came out to the ranch the next morning with Bob and Jeffrey. I rushed around trying to get the Weaverville house in order, ironed a couple of Bob’s shirts, and still got out there in time to fix lunch for them. Noel had stayed overnight with us—she and Rebecca not getting to bed until 10 pm and then still talking at nearly midnight. I took Noel back to Florence and Leonard’s, bought groceries, picked up Ann Marie because Jeannie needed time with Fred, who was in the hospital. We got out there about 12:45. Uncle Stanford was resting upstairs. “Amid the bags of groceries I fixed lunch and finally got everyone fed.” Rebecca and Ann Marie headed back to town with Bob and Uncle Stanford.

I cleaned up after lunch (thank goodness for paper plates) and then the boys and I fixed ice cream. Pulled the drain on the pool and sat down with a glass of beer and the Sunday paper out on the porch. The phone rang and it was Jeanne Meyer saying Ann Marie wasn’t there yet. I assured her they’d left and Florence had called earlier to say she was sending some leftover food out with Bob so I knew they were in town. I called the house and told Rebecca to call Jeannie. I was still cleaning the pool when Bob got home and suggested that he and Rebecca put dinner together, which they did. Florence had sent out leftover macaroni salad and some ham so he fixed a green salad and heated up the ham. 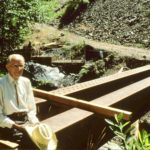 Clarke and Rebecca had slept out in the VW van that week. It was still terribly hot. I’d had a bad dream about clouds of dust coming up from the Prairie Creek side of the canyon and then a giant clear-cut coming over the top and down that side.

That Wednesday evening I was writing by candlelight and listening to KKHI on the radio. The day before, around 10:30 in the morning, we had heard trucks coming up the road and the gas truck arrived. They left the big truck down by the creek and brought a small one pulling a lift trailer. They took a run at our hill and pulled up the slope perpendicular to the orchard, backed in between the two small apple trees, around the garden and between the garden and the plum tree to the tank. We were really impressed by his backing. Then they hoisted the tank and went down to the creek to fill it. I finished weeding among the tomatoes in the half hour they were gone. They had more trouble coming back and had to get a second run at the hill.
It was also more difficult lining the tank up correctly. When they were finished I offered them beer, lemonade or water. They took the lemonade. Don Larkin was the tank truck driver; I didn’t know who the other man was. They even re-lit the pilot light on the refrigerator.

When they were about to leave we heard a heavy plane and decided there must be a fire someplace to the northwest. Later in the afternoon many planes were going over. Some we could see and some not. I called the USFS in Big Bar and they said the fire was near Denny. We were getting some wisps of smoke in the sky by then. Bob called to ask whether planes were going over because he could see them in town. A large helicopter went over several times too. He was staying in town that night because he was leaving for Bakersfield early Wednesday morning.

Jeffrey slept out in the VW by himself a couple of nights. Even Rebecca was impressed with his bravery.

We went to Big Bar Wednesday morning singing “Country Roads” all the way at full volume. I took the garbage to the dump where we nearly collided with a woman driving a dump truck load of rocks. We stopped at the Forest Service office to see where the fire was on a map. Rebecca stepped on a bee on the lawn and had a swollen foot. I was reading Gunther’s Big Sky and getting emotionally involved in it.

I found myself thinking about my mother’s life as a mother and wife and wishing I could talk to her about it. But the stroke made it so difficult for her to talk and to put her feelings into words. She also must have had resentments, anger, sadness and so forth and certainly had more cause I thought. I got so upset over petty things and yet that was understandable I supposed because I had to deal with so many petty things on a day-to-day basis. “I’d like to be one of those calm, capable people who serenely takes care of others’ problems and isn’t disturbed by much of anything.”

On August 5th I noted that we were finally having some cooler weather. That Saturday Bob had spent most of the day in town getting parts for the gate, etc. Rebecca and Jeffrey went with him. They brought the stake-side truck out and Rebecca and Jeffrey rode “magnificently” in the back of it, having ridden home from the gate. When they got home Clarke, who stayed with me, was asleep on a quilt on the floor.

I’d pulled all the weeds out of the cement sand pile and given Clarke a hose to play with. He’d had a good time making rivers and plowing with the bulldozer. Most of the time he had it getting stuck. We’d taken our lunch down to the creek and spent about an hour and a half there.

Oliver Burglund and a friend of his came out to look at the gate site. He was going to put in the gate in return for Bob’s working on his water system. Frank Walden said he’d help too. I’d called Bob in town to bring some beer out and after he’d given them the grand tour it was quickly consumed. This would be a second gate, down by Walden’s.

On another day I got up early and went to prune brush along the road, starting at the creek and working my way up to where the horse gate used to be, just past the little spring that runs across the road. I was home by noon. “Pruning is hard work but I enjoy it—especially the quiet.” Then I fixed lunch and we took it down to the creek where Bob was stripping off the forms.

August 6th—“It rained all day yesterday. Beautiful! I could feel my whole body plumping up with moisture—the grass turned darker green, the air was soft, almost coastal, and everything smelled so good. Pieces of mist broke off larger pieces or materialized out of nowhere and came drifting up out of the trees.” I made a blackberry pie, baked cookies, cleaned the pool, read. The children too seemed to enjoy the rain. We all slept late except for Bob.

“Had a big argument with Rebecca about going to a friend’s slumber party, birthday party. Another girl whose older sister has slumber parties started this last spring. I don’t like the idea at all. I think it’s fine to have a friend stay overnight but these group things get out of hand—giggles until dawn and exhaustion all the next day. It’s Friday night and Sunday we’re leaving on a camping trip with the children. She’d be exhausted. I don’t know the parents, there are four younger sisters, etc. Good old peer pressure!”

Friday night, another big scene. I did call up Alice Jones to see when Nick, Jessica and Cedric would be up. They were arriving in two weeks and I made arrangements for them to stay overnight at the ranch during that time. 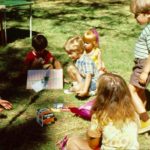 Somewhere in the midst of these happenings, Clarke had his fourth birthday. 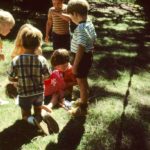 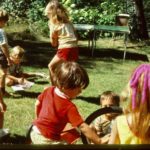 “I’m getting mixed feelings about this business of the children and I being at the ranch all summer without other kids.”