So it wasn’t mobile phones that were being worked on. I found a 1965 Trinity Journal news clipping that explains the phone project. At that time the phone company was called Western Telephone. They were offering the county a new 150-megacycle radio communication system on a lease basis. Bob was the company communication engineer. ‘He said the radio system, using Motorola Company equipment, had been substituted for a proposed mobile dial telephone system which the company had previously offered but which the sheriff and road departments had found unsuitable to their needs.’ 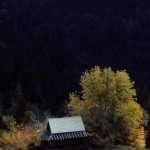 mpany proposes to install a repeater on Hayfork Bally and another on Oregon Mountain if the county would want a standby emergency unit.” The lease system would eliminate the need for a capital outlay to purchase equipment. Maintenance of the system would be included in the lease contract. The county’s current radio system was obsolete according to Sheriff Tom Kelly and Road Commissioner Ivan Jeans. The monthly rental would be “considerably lower than the dial mobile service” according to Gilman Snyder, president of the phone company. So that explains that!

My days continued to revolve around our child and making sure my husband got fed. Most mornings I’d take a walk with the baby after Bob had left for work. There was always housework—dishes, laundry, bathing the baby, feeding her and I often made bread. During bad weather I was more restricted so far as going outdoors was concerned but I did take magazines I’d finished down to Big Bar where there was a loaning/exchange area for books and magazines. I saved baby food jars to give to the school for artwork painting projects and saved some for Horace Jones, in Weaverville, for screws and nuts and other small objects for his shop. And I’d go to Weaverville to buy groceries, either on my own or with Bob.

We spent Christmas at Lake Tahoe (DL Bliss State Park) with my parents. When we arrived there were two feet of snow on the ground. They had such a nice house—an A-frame roof with beams, fireplace and a floor furnace. It started snowing that night. The wind howled in the chimney and the snow piled up. We left the baby with my mother the next day and rode down to Emerald Bay with my dad for an hour or so. A lost traveler woke us up at 5:30 on Christmas day. We took turns opening the baby’s presents.

One thing about having a son who is gifted with electronics is that you might get interesting Christmas presents. Bob’s Christmas present for Leonard that year was a switch that would turn off the sound on the TV commercials.

Back in Trinity, a few days later, it was snowing. Rebecca stood for the first time in her crib the last day of December. In early January, with the advent of more storms. the electricity kept going off. Bob couldn’t make it up to the creek. He put chains on all four tires to get to the top of the hill above Walden’s, where there was a slide. He managed to move enough of it to get past. At the gulch, which washed out last year, was a huge rockslide with a big oak in it. Both of these slides were where new roadwork had been done. I wrote, “He’s pretty discouraged, especially about finances for removal.” On the 4th we rode into town with him to get groceries—he chained up before we left. No electricity in Weaverville when we got there. “Trees had fallen all over town and a big limb had broken off the tree in Florence & Leonard’s back yard.” It snowed steadily all day. We stayed that night in town and learned later that it had taken Irene Nunn three hours to get home to Big Bar from town.

The phone company, courthouse, hospital and Morris Hardware had their own power systems. The bank moved one of their machines into the phone company office. Everyone else used Coleman and kerosene lanterns. We cooked on the trash burner at Florence & Leonard’s and kept the fireplace going.

A few days later, Bob and Larry Donaldson snowshoed to the top of Oregon Mt. to work on equipment. By January 10th we were back home at Big Flat. We still had no working phone. On the 15th he walked up to the ranch. There was about a foot of snow at the gate. Only a few trees were across the road, to our surprise. The clay slide by the creek was very large and fluid and had come down a little onto the bridge.

We had a serious discussion about living year-round at the ranch. Bob thought maybe we could buy a Scout and put blades on both it and the jeep. The idea of building another house and going further in debt on more land was very discouraging to both of us.

Earnest Duncan stopped by one evening. Earnest and his family had a ranch on the other side of the river. Two of his grandsons had been in my classroom at Cox Bar School. Earnest had walked way up on Manzanita Ridge and back looking for some lost cows and wanted to know whether Bob had seen them up at the ranch. He looked so tired, as if he were about to fall over. Earnest said the snow was quite deep. He had stayed on the north side where it was crusted but would fall through up to his waist whenever he crossed over bushes.

Bob continued to work on mobile units and testing how the phones worked from different places. Another day he left the car and went with someone to Horse Mountain. The mobile operated quite well from there to Oregon Mountain, a distance of about 60 miles. Sometimes he had to stay overnight in Willow Creek.

When I got a few spare minutes I would read and was reading Bequest of Wings and King Solomon’s Ring. We were in a “no pennies till payday” week. “The jeep is paid for now but we have income tax and fire insurance to pay.” I made bread. One thing about having a baby around was that there were always some new adventures being tried out. She was now crawling all over the house when I let her out of the playpen.

Later on, Bob was able to tell Earnest Duncan that he had heard cowbells above Walden’s. Earnest stopped by to tell me to thank Bob. He said he had found two cows in good shape and was leaving them till he could take them up Manzanita Ridge in a few weeks.

Bob continued to work on our telephone line to the ranch on weekends. He cut some trees that had fallen across it and spliced the line where it was broken.

One day, after Bob had left to go work on our 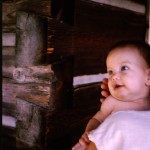 phone line, the house began to get quite smoky. I found smoke pouring from a section of stovepipe in the living room. I thought there might be a flu fire and called Darrel Towne in Big Bar. He said he’d call the Forest Service. About five minutes later three USFS men came with their truck. They looked things over and decided to clear the stack. They climbed up on the roof and lowered a wire, scraping enough soot aside to allow the fire to draw (Bob had just said that morning that he thought he would have to drop a chain down the stack). When I went to take Bob’s lunch to him at 1:00 o’clock, he decided to come home and do a thorough job of cleaning it, and he did.

It just seemed as if there were one thing after another with the road. In the old days I think it was easier to rebuild a section of trail. Plus they didn’t need access in and out every day in order to make a living. Roads make things more complicated. Providing for water runoff is a huge issue and this road seemed to really want to be a trail. Toward the end of February Bob came home soaking wet after borrowing Frank Walden’s Tote Goat to check on the road and finding there was another slide just below the gate—huge boulders. He thought the clay slide might stabilize sooner than we had expected though, a slight bit of cheer. We found out George Costa had sold everything—house, cats, mine, etc. so he wouldn’t be able to work on our road.

A few nights later Bob called about 4:30 saying he was coming down Horse Mountain in a snowstorm through about eight inches of snow with fog and snow blending so well it was quite difficult to see the road. He arrived safely but late.