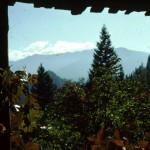 Reading journals that I kept years ago, and then writing, involves a lot of sorting and decision making: Will this interest anyone besides me? Should I include detailed descriptions? What about mentioning others names—former spouses of friends or relatives, people only a few others might remember? I’ve pretty much decided to include names if I think a reader from Trinity County might recognize them. I’ll include sightings of various birds and animals because I found them interesting and if the reader doesn’t then the reader can skip it. I talk about various projects and semi-disasters because those were a big part of our lives at the time. I’ll try to not do too many “cute” baby or toddler things. Sometimes the words get very disorganized and I know that. And apologize in advance.

Fall advanced swiftly. We enjoyed a potluck (Schoenthaler, Varney, and Van Duyn families). The men helped move a rock and haul some pipe and then we ate. Entertainment was Bob on banjo and me with a couple of tunes on the accordion.

Farm advisor Joe Borden and his wife, Mary, came out for dinner. He was trying to find out whether we had for sure a fly that parasitizes snails. He’d found one and wanted to be sure there were more. We had little snails in the spring and in the swampy area across from the house where watercress grew. My eldest brother learned in a parasitology class that some species of snail uses watercress for a host and people can get infected with it. My father-in-law loved watercress and chose to ignore any possible hazards. I indulged but not often, just in case. 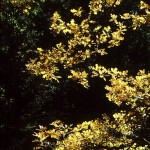 telephone it seems worse. The washing machine broke down and I used the tub to wash diapers by hand. Fortunately Bob was able to fix it. “I almost hoped the washer wouldn’t run the next day because it was so quiet and pretty out on the porch. The engine is loud and blots out all sounds of birds and wind. “

Bob put roofing paper on the front porch roof, tacking it down with1x 4 wood strips. I kept planting flowers that had almost no chance of surviving the deer.

Seeing the first snow of the season across the canyon on Eagle Rock was followed on
October 18th by someone bringing Bob home on crutches after work. He was at Horse Mt. with Jim Barrett, unloading some equipment, with the assistance of another man who was up there working on ski plans. Bob was in the truck holding the dolly. It slipped and Bob tried to hold it. He fell, throwing his knee out of joint and hitting so hard that paint came off the truck on his pants. He put the knee back and then discovered that the other man was a doctor. Our own doctor told him he couldn’t drive because of the clutch. From then on there were trips to Redding to see a doctor. Hard for him to get in and out of the VW, unlock the gate, carry anything, etc.

ed, before the accident, to rent a house at Big Flat from the Rybergs, for the winter. It was behind the campground. The house had a large kitchen, two bedrooms, heated with an Ashley stove. So that meant when we moved we’d also need to move firewood. How to do this with his leg and the baby to care for? One day Ira and Curtis Adrian came walking up to the house with their rifles on their shoulders, having left their car at the gate. They’d come to help. Ira helped put the tractor back together. Curtis helped Florence, who soon arrived with the small store truck. They filled it and their pickup with wood. I fed everyone and then we drove to Big Flat and unloaded. Steve Ryberg helped. By the time we got back, Ira and Bob had the tractor in the barn.

The fall colors were spectacular. The oaks were an orange-yellow; maples a brilliant yellow; the peaches flame colored (looking as they had been waxed); the English walnut was a big yellow butterball; the pear was purple and then turned a deep red; grapes were turning yellow as was the black walnut. Afternoon temperatures had been quite warm.

It was a little more frantic now with me having to do loading and unloading of things. Rebecca’s colic usually kicked in around dinnertime, adding to the stress. The swelling would go down a lot if Bob lay down and put his foot up. When he was at work I cut up some wood with a saw and also hauled some big wood to the porch for the Rightway. His leg began to gradually improve to the Redding doctor’s surprise.

In early November we packed more things and took both cars to Big Flat. I unloaded and Bob put some things away and comforted Rebecca who was screaming as I tried to clean the refrigerator. The next day Florence and Curtis came and we really got busy. Took the beds, the crib, the playpen. It was raining lightly the whole time. Florence had brought chicken and cake and I fixed coffee and bread and cheese for lunch. I unpacked while they all went back for another load. We’d never have made it without them. The next day I washed baby clothes and diapers by hand because we didn’t have our electric washing machine yet. 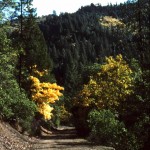 days later Bob went to the ranch where he lubed the jeep and defrosted the refrigerator. The clay slide above the creek had come half way across the road with all the rain. A few weeks later the clay slide completely covered the road.

One morning, on our way into town, we saw otters playing along the river on a sandbar. They tumbled around together. Then went into the river, diving and playing, then swam upstream.

Bob was working on mobile units in December. I’m assuming this means mobile telephones versus landlines. He was really excited about it. Hard for us to imagine now with Smart Phones. They installed two units. He got home late one evening after eating dinner with the Motorola man. Another night he got home around 10:00 and then went up on the ridge to test a unit. One day we drove into town, testing on the way. We stopped at Varney’s for a few minutes where they had just watched the Gemini 7 take off on TV. Many evenings he was studying to learn more about mobile units.