This was just a really bad year for childhood illnesses. Sometimes a couple of other parents and I would trade off on having a “play day” at our respective houses. One Friday afternoon, after hosting: Mary Beth and Debbie Kaz, Nancy and John Van Duyn—Rebecca got sick and by Saturday was really sick. She didn’t eat all day and couldn’t even hold down juice. Sunday she was better but had itchy spots on her back. Jeff developed some blisters and I suspected chicken pox, which turned out to be correct. A week later Rebecca got something else that included a hugely swollen gland in her neck. No antibiotics for the chicken pox for either of them but this needed antibiotics. 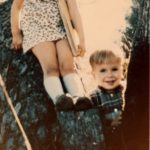 Bob went to Garberville that Monday and Doris picked up my sitter (also took her home) and she and I went to the music class. Tuesday he called and said they were having to work late into the night and he wasn’t even sure he’d even be home Friday.

“Am quite tired—guess mostly due to pregnancy. Think this will be another August baby.” I had some worries this time about a possible miscarriage and had to spend some timem, off and on, lying down.

The children weren’t well at Christmas but a few days later were healthy. At least we had lights and water that year. The children enjoyed decorating the tree. “Jeff spent most of his time holding and admiring decorations.” We put a little tree in their room, complete with a small string of lights. The family Christmas dinner was at Dick and Kay’s.

I’d gotten way behind on ironing what with sick children and Bob and I seemed to get colds fairly often—(when kids got sick) plus my own busyness so took it to Debbie Mortimeyer. She also ironed sometimes when we were at the ranch in the summer where there wasn’t enough electricity for an iron.

I took the children to see Ring of Bright Water. They enjoyed it. Took apple cider and cookies, which helped. Bob got home that night, around 10, from an overnight trip to Mad River.

After a very tragic fire down the street from us, that took the lives of two children and severally injured another, the town was in shock. Bob talked in terms of setting up smoke detectors in the house. “We’re wondering if eventually building laws will be such that no house will pass inspection unless smoke and fire detectors are installed. No different than safety belts.” I didn’t realize until typing this that smoke alarms weren’t common then.

January 6th “Must do something I really enjoy that means something to me. Haven’t taken a long walk by myself or spent a morning bird watching in years. Feeling depressed about it tonight.”

On the 22nd I wrote “Bob spent last week going back and forth between Weaverville and Mad River, arriving home Friday night. That Monday I went to Big Bar to hear Biz Johnson speak on water and mining claim problems. Roast beef dinner and a drink for $3.15—“delicious”. I rode down with Dave Ohde and was glad I didn’t have to drive in the rain. “Biz Johnson didn’t have much to say but Hazel Wilburn had some specific things to say.” 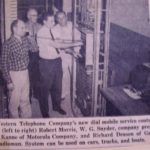 1970
This is a photo from 1968 but will help readers understand what Bob was working on and how excited people were to get mobile phones.

Bob and I went to see Romeo and Juliet. It was well done. Ohdes were there and we went to their house for awhile afterwards.

Marne Wilkins quit work at the library and Dorothy Underwood took her place. I learned that I’d placed first in the civil service Intermittent Ranger exam, 88.89 on the written and 92 on the oral and education exam.

Bob was working on his project every night. I wish I could remember what it was now.

Weaverville became part of the widespread flu epidemic and Rebecca was the first one to come down with it in our household. I stayed home from work to take care of her. On February 16th her temperature went up to 104.6 twice. I took her to see Dr. Breeden and she was put on antibiotics but the temperature remained high. By the 19th she was finally recovering and Jeffrey was getting sick. She still had bronchitis and looked awful but was better. The night of the 16th we were up with her a good part of the night. I kept sponging her “She’d sleep for an hour, then wake up crying. After being comforted she’d sing for awhile and go back to sleep. At 5 a.m. –temperature 104.4 we put her in the bathtub for 20 minutes to try to cool her off. At 7 a.m. it finally dropped. I ended up staying home from work all week.

Bob worked on putting cedar boards in the addition that weekend and I’d gone to see the movie Sweet Charity with the Ohdes.

The previous week we had gone to Redding to hear Paul Erlich speak on population. That was kind of a strange experience. Here I was pregnant with our third child and going to hear about how there were too many people being born. Not only that but I had to use the restroom just before people were allowed into the auditorium (too many had shown up to all fit) and when I got out my companions were gone! They’d gone inside and I was stuck in the lobby. It was shown on TV there but I wasn’t a happy camper. When the program was over they came out and decided to take me for ice cream. Good decision.

One week we tried to go out to the ranch but the road was closed by a dirt slide just above Walden’s. We walked up the road a little way, went back to the car and got our lunch, and then sat by a small stream that had a moss covered waterfall and ate.

Bob and Jim Pierce brought up a chair we had bought from Jim’s parents and we planned to also purchase a couch. Paid only $65 for them.

In late February Bob walked out to the ranch. He found that there was a big washout at the second culvert below the house—25 feet deep and 50 feet long. “He’s quite discouraged and is actually speaking in terms of trading it for land closer to town and more accessible. “

We went to a dinner at the Country Kitchen sponsored by the Chamber of Commerce for Citizens of the Year. Lucille and Gil Snyder and Al Wilkins received awards.

Bob flew to Victorville and would return on Friday.

“Last week was awful. Monday and Tuesday afternoons I worked from 1-5 in a training session at the Joss House. Thursday and Friday Dorothy Underwood worked my morning shift at the library while I substituted for Mr. Clark-both days. “

And suddenly it was March 17th, a Tuesday. Bob went to Garberville Monday night and would be back Friday night. 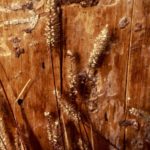 Kay had a boy—Michael David Morris. Jeffrey had a very bad, croupy cough. Nancy Van Duyn came over after ballet, as she usually did. Marilyn wanted me to watch Nancy and John the next afternoon and I wanted to monitor Jeff’s cough so I decided to be home for that and then work at the Joss House Friday afternoon.

In late March we left Rebecca and Jeff with Florence and Leonard for a few days while we went to the Bay Area. My brother and his wife were out of town and loaned us their apartment for a few days. We went to UC Berkley campus where Bob spent some time in the engineering library and I walked around. We ate lunch in the student union and went to the campus bookstore and a few others. Went to Mr. Mopps. Went to San Francisco to see the Committee but it was sold out so we went up to Bocca Ball where three people sang operatic parts, interspersed with piano and accordion music. Very enjoyable even though drinks were “3.50 each time”.

“The North Beach area is really hippy-two different restaurants we went into—one in Berkeley and one in Palo Alto– had signs in the windows saying “No Bare Feet”. We stopped in a hippy button store and got a few and a poster.

The next day we went to Palo Alto and spent most of the afternoon on the Stanford campus. Ate dinner at the Black Forest Restaurant with Gene Ammon. Afterwards we went to his apartment to talk awhile. Stayed in a motel in Palo Alto.

Thursday we searched for an Indian storybook doll for Rebecca and finally found one. Bob ordered a book and we bought a couple of Beatrix Potter books for the children. Stopped for half an hour to talk to Janie Nelson and then visited with Hans Nelson where he worked for Geologic Survey in marine geology. Hans was a seasonal naturalist at Crater Lake the first summer I was there. He showed us a lot of the equipment he uses. We also visited briefly with Mrs. Anderson, Bob’s former landlady. Got home late Thursday and picked up the children Friday morning.

The day before Easter Bob took the kids down to a grassy hillside to fly kites.

“That vacation trip was really nice: dinners without constant interruption, conversations on an adult level; browsing through bookstores.”