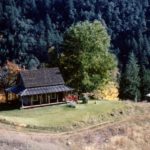 It was almost two weeks into September when I played catch-up with my journal, noting only that I’d taken Jeff to see Dr. Polka because he had developed a terrible, croupy cough.

We’d promised Rebecca a backpack trip that spring and, although she probably didn’t remember that promise, decided that this was the time. She was really excited about it. We left Jeffrey with Florence, hoping he wouldn’t keep her up at night, and drove out Canyon Creek, stopping at the cabin, where Hurds and friends were staying, to borrow a cup and spatula.

We headed up the trail—me with the three sleeping bags, Rebecca’s blanket and the camera, and Bob with everything else—including his attaché case! Headed up the trail about 11 a.m. She did very well although fussing sometimes. She wanted to climb every rock along the trail. All these years later I still can’t believe we took a 4-year old that far, about four miles, to the Sinks. There was lots of dogwood, big Douglas firs, and cedar but no water. Fortunately we’d taken a canteen. I played games of “do you think there’s an elf behind that rock”?, hide-and-go-seek, and other diversions but eventually we hit a stretch out in the sun where she started crying. About then, Bob, who had often gone ahead and then come back to check on us, came back and said the camp was just ahead and she ran to catch up with him.

The Sinks got that name because water goes underground there and then comes up again. There were big cedars and maple trees. There was trash but we went across some rocks and found a nice spot where the two branches of the creek joined. Here there was a pool with a little beach of white, granite sand. We cooled off and Rebecca even gave her little doll, John, a swim. Back at camp Bob built a stove, using rocks and a stovetop from another site. We ate dinner and Rebecca helped wash dishes while Bob studied. She was up and down to the creek many times. “Before going to bed Rebecca asked Bob about tigers and he said there weren’t any, but might be mountain lions. Very reassuring! But he told her they were afraid of people.” 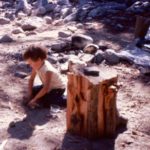 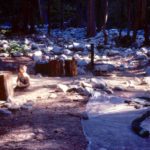 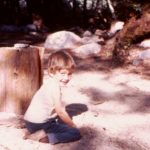 Right after we bedded down a doe with large twin fawns came tromping around. Rebecca had chosen a camp spot about 50 feet from our sleeping bags and I asked her if she would be more comfortable with us. She was glad to move. The deer made a lot of noise and I think I’d have wanted to move closer too.

At breakfast Rebecca mixed the pancake batter and washed all the breakfast dishes, except for the griddle. She loved it! “The dish washing pans were on two stumps and she was just the right height for them.” Later she spotted a large hornet nest up in one of the maples (Bob had seen it earlier). 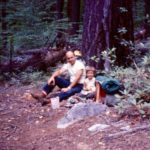 She seemed quite tired that morning so I suggested we leave earlier than planned and it was a good thing we did. She got more and more tired and fussy. After lunch she wanted to lie down on every flat rock with her blanket. I began to think she was coming down with something and she began to complain of a stomachache and a headache. When we got home she had a temperature of 104 and complained of being cold. While Bob took the store truck out to the ranch to get the washing machine I called the hospital and Dr. Polka saw her and said she had tonsillitis. Frank Hicks opened the drugstore to get medication for her. I felt terrible that she had walked that far while she was so sick. The medication must have taken immediate affect because by the next day the fever was gone although she was fatigued and cranky.

In reading my notes I’ve been surprised that the children were sick or had colds as often as they did. I guess that’s normal for small children but all these years later I didn’t remember the frequency.

Kathleen was coming to our house after school again.

That weekend we went out to the ranch. Bob went with us but then drove the truck home. I picked some strawberries, green beans and lettuce. And some squash to take aback to Weaverville the next day. Picked lots of apples and put them in boxes in the car.

“I think Rebecca’s unwinding a little. She and Jeff have had other children around for three days, morning and afternoon. She can’t take the lack of privacy.”

My next entry wasn’t until Sept. 22nd and I mentioned being tired and that “Seems as if I’m on my feet all day—in the library and at home.” That Friday I’d worked all day because Marne had to be out of town. “6th period was terrible.”

Rebecca and Jeff began staying in the mornings at Dorothy and Jim Pierce’s house. They lived just a short distance down the street from where we did. They had two boys, seven and five and the 5-year old was home mornings. Our two and Ronny, the younger boy, seemed to get along well. Dorothy even made Rebecca a pink plaid duffle bag because she went there in her pajamas and then changed into clothes.

Bob had a cement truck come and he and Bill H., and the driver poured the walls and floor for the sump. Bob didn’t get through until nearly nine.

September 23rd, Bob had to leave for Fresno. He got back around 1:00 a.m. Thursday morning. Brought a cable car for Jeff and a Snoopy ring for Rebecca. That Friday I substituted for coaches. If the high school needed a sub they’d pull me out of the library. “It was really a frustrating, ridiculous experience as half the school was gone.” Florence invited us over for a venison dinner, which was nice. Saturday I drove to Redding to take a civil service test for an intermediate ranger, hoping for some part-time work at the Joss House.

The previous week, two boys I’d taught in fifth grade were using guns and one accidentally got killed. Really upset me for a while. Nice youngsters. 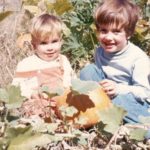 November 8th I wrote that we had moved back into our house after spending three weeks with Florence and Leonard because our sewer completely stopped functioning. But by November 8th we were all hooked up to the town system—the pump installed in the sump, etc. Bob worked evenings and weekends to get it done—sometimes until 11 o’clock at night. I did a lot of backfilling with the ditch and cleaning dirt off the road.

Rebecca was taking ballet from Marilyn Van Duyne. She loved her tutu and didn’t think it at all funny when Grandpa Leonard asked her whether that was her fourfour.

One night Marilyn and her daughters (Jane and Nancy), Doris (and her daughter Linda), Rebecca and I went to Redding to see Peter and the Wolf and parts of Swan Lake and the Nutcracker Suite. Marilyn brought sandwiches; Doris tickets; and I took everyone to the restroom. After the lights went out we munched tuna sandwiches and pickles and after the program we went to Sambo’s where we sat with Bev Forero and sons. We used to travel a long way for a bit of culture!

I took the two children to the homecoming game because Cheryl was running for homecoming queen. Rebecca knew a number of the people who were there and said, “Mommy, the whole world came!” We left at halftime.

Marilyn, Doris, Bev Forero and I went to see a modern dance program. “A mixed color group. Creative and varied. I didn’t know so much could be said in modern dance. Beautiful bodies.”

Bob was gone quite a bit in October. Several trips to Garberville. He and I took the children around trick-or-treating on Halloween. Rebecca was a bit hesitant about knocking on doors but Jeff just marched right in. 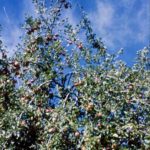 We were trying to make sure none of our apples went to waste. One weekend I took Kurt Parkan out to pick for his family. Another Hal, Dorothy, and Gail Goodyear came out, and another Doris, Eric and Linda Ohde.

One night Marilyn, Jane, Nancy, Rebecca and I went to Redding to see a marionette program –Jack-and-the-Beanstalk and the Three Billy Goats Gruff. It was well done.

On November 8th I cleaned house and Florence helped me move stuff from their place to ours because Bob had to work up on Oregon Mountain all day.

Two weeks later I wrote that Bob had installed a speaker that he had originally made for Nancy and David Adrian but they didn’t need anymore so we could finally listen to records.

We started trying a new baby sitter off and on, Maria Diaz. She was from Brazil and had moved to the U.S. three years ago. She was going to the high school as a foreign exchange student and was 22.

Bob had gone to the ranch to work on the tractor. It needed new spark plugs and he was going to drive it down to near Walden’s where I was to pick him up. I was in the middle of making a pie when he called to say he was leaving the ranch. So I finished the pie and did some errands and ended up being an hour late to get him. I was so sure it would take him two hours but he said an hour and a half. Felt really bad when I finally got there because he was so cold.

I started going to a music class taught by Dick DeRosear at the Elementary school—a rhythm class for adults that was the same as what he taught children. There were about ten of us there.

My job was pretty frustrating. Got tired of disciplining. And it was also really cold in the high school library. The heating system was blowing cold air in.

Rebecca looked at the pink clouds one morning and said, “Maybe it’s getting ready for a pink rainstorm.”