Jeffrey was starting to learn to ride his bike. We didn’t have much flat ground in the backyard but enough to practice. If Jeff reads this he will remember the “sticker” incident. Persistence. 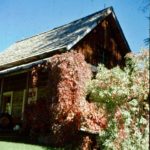 I made a trip to Fresno with Bob in Lonnie’s plane as he had to go that way for business. I stayed with Candie, Jim and Carin in Fresno for a medical checkup. He continued from there on a commercial flight to Bakersfield. The children stayed in Weaverville with grandparents. After dinner Candie and I went to a Montessori meeting at Carin’s school. One afternoon Candie and I went into a bookstore and I bought paperbacks for the children. The next day I met Bob at the airport and we flew home together.

The 1st of November I wrote about hiking up Garden Gulch, leaving Clarke at McClurg’s to play with Amy. We’d had several days of rain so the ground was damp and the leaves noiseless beneath my feet. Saw gold-crowned sparrows, an acorn woodpecker, robins, a wren, a spotted towhee, a covey of quail and a chipmunk. I needed a jacket to sit and eat lunch. 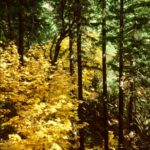 The previous week had been “frantic”. Lots of house cleaning, and nursery school. I was making a long dress for Rebecca for Halloween, which was October 31st. “She wanted to be a pioneer lady, but really I think she wanted me to make a long dress for her. Finished it Thursday afternoon and ironed patches on some old Levis for Jeff to be a hobo. He wore one of Bob’s old shirts and carried a pole with a red bandana on it. Thank goodness Clarke was able to wear his bunny suit again.” We ate a quick dinner and rushed over to the Recreation Building where there was a little parade of kids and judging. Jeffrey won a prize. Then we picked up Ann Marie and went up to the house to get Bob and took the children trick-or-treating. After that it was back to the park for games and then home.

I’d gotten a notice on Thursday that there might not be continued funding for the nursery school’s extra class even though it had been discussed the previous year. So there was a meeting with the high school principal, the community college, Brigitte and myself and Bob Gravette (county schools). Mixed in with all that was hauling garbage to the dump, several meetings, and then nothing more written until November 21st.

I’d just returned from a lengthy nursery school parent meeting and was playing John Denver records, had a fire in the fireplace, and was drinking hot-buttered rum. Bob had just gotten back from a business trip that afternoon and was still not back from a planning commission meeting. We had stayed home the previous Saturday but had gotten Patty to watch the children Sunday while we went out to the ranch. Bob put drainpipes behind the abutment while I hiked up to the Upper Ranch. 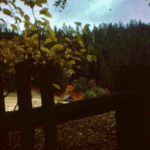 “It was overcast and drizzled once for a few minutes but a marvelous walk. The maples were bright yellow—big leaves, twice as large as my hand, drifted down. Kind of spooky on a cloudy day in some of the dense forest—I felt as if people of 50-75 years ago should have been in the cabin and tending the field up there. I found an Indian pestle in the meadow and brought it home. The trees around the old cabin were brilliant reds and oranges. Got back to the creek around 4:00 p.m. Half an hour later it began to rain hard. Fortunately Bob just finished. We were sure glad he had the culverts in. 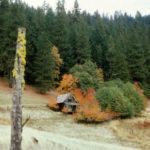 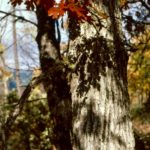 Tuesday I had gone to Big Bar to attend a Forest Forum program on forestry in Finland, with a little bit of reindeer thrown in. I’d found it interesting: very mechanized over there, small trees, even-aged, clearcuts.

December 2nd I drove to Redding to do some Christmas shopping. There was a little snow in the rain going over the hill. Bob was leaving that afternoon to go to Redding and fly to Bakersfield.

Family Thanksgiving dinner was at Florence and Leonard’s. I took my usual refrigerator rolls. We had gone to Lewiston that morning to buy a new dining room table and four chairs from Helen and Bud Fine. It was a nice table, round, with folding leaves and two extra leaves for the middle if needed. Others at the dinner included Dick, Kay and Michael; Nancy and David and children; Nancy and Dave and children; Uncle Stanford and Calvene; and Aunt Nell. We went out to the ranch Saturday and took Kent. Rebecca and Noel went out to the lake with Florence and Nancy. 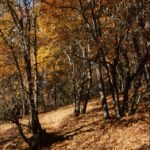 On my 36th birthday I took Clarke to Linda’s and hiked up on the pointy mountain. (Not quite sure where that is.) Ate lunch sitting by a mossy- trunked oak. I could see Weaverville but mostly looked at the wind blowing the ponderosa and sugar pines and the Douglas firs. Misty rain fell now and then on Weaver Bally.

When I I got home I ran errands with Jeffrey for an hour while Bob and Florence were fixing bulletin boards (covered with burlap) for me. She had asked me the day before what color I wanted. Rebecca gave me a little pillow she had made at school, stuffed with pieces of sheets. Bob gave me a picture of the Crags that I had admired at Alpine Outfitters. Florence fed the children at her house and brought them home and Linda Ohde child sat while we went to dinner at the Lewiston Hotel.

On the 20th I noted that I had a bad cold and Bob had just returned from being gone for a week and had gone to a meeting. But “I had all my Christmas presents sent” although still needing to wrap what I had at home.

The nursery school’s last day before vacation was the day before and we’d had both classes together. They’d decorated stockings and then Santa (Dan Tucker) had come. Clarke and Andy were the only two who wouldn’t sit on his lap. Brigitte and I had to sit on his lap to get our presents. 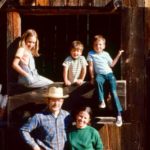 “We had an especially good Christmas” that year. One thing I mentioned was that the children were old enough to wait with unwrapping to watch others unwrap. Everyone was healthy and I was able to give Bob some things he really liked without having to ask him what he would like. One was a plastic, raised relief map of Trinity County that came in two pieces. Rebecca was really excited about giving to others. Speaking of excitement, I’d asked Linda Ohde whether she could come and help me to finish things up on Christmas Eave and she was really excited about doing that! “After I took her home I heard a clunking outside. I finally discovered, by walking down the road with my flashlight, that there was a large, belled mule down on the turn!”