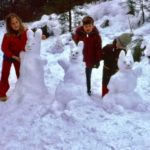 After the Christmas social life—breakfast at the Ohdes, dinner with the grandparents, a dinner on the 23rd with the Joneses and my brother and family—things got back to more-or-less normal. 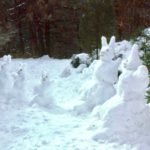 I got Linda Ohde to come and do child care while I took a walk. We’d had a little powder snow the night before so there were lots of animal tracks. The only animal I saw though was a gray squirrel. I ate lunch way up on the hill with hard chunks of snow falling all around from the trees—one landed on my pack and in my coffee. It was warm in the sun. 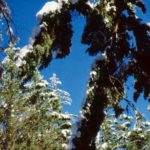 Bob went out to the ranch with Mike Quinn, although not all the way. They put in the last downspout below a culvert. I took the children up on Glennison Gap to slide in the snow. Rebecca really didn’t want to be there so sat in the car to eat her lunch. The boys had a good time sliding on disks and plastic sacks. Bob and Mike came along and Rebecca rode home with them.

One day Linda came to be with the children so I could give a talk on the nursery school to Rotary. Rebecca went to slide in the snow at the Meyer’s. “I’m glad it’s over. Most of the men are well past child rearing so I think they weren’t really very interested.”

Cousin Jessica came and for lunch one day and stayed most of the afternoon.

“I’ve gotten some reading done–can squeeze it in here and there to preserve my sanity. Just finished reading Driftwood Valley, a story about a couple who lived in British Columbia for two different years, 300 miles from the nearest town.”

“Bob is working on a very complicated program for the computer but one which should save the company a lot of money.”

Aunt Nell died the morning of January 6th. She had been in the hospital since before Christmas. “I’m going to miss her. Wish I’d gone to see her sooner. “ I had tried the day before but there were nurses with her and it was obvious she was very ill. I think Aunt Nell and I had our wanderlust in common.

Florence took the kids the day before (Sunday) so Bob and I could go out to the ranch. We drove as far as the upper gate and walked down to the creek and back. We got soaked—our legs did—and icy, but stayed dry on top with our rain jackets. There was snow here and there, lots of rocks in the road, very isolated feeling.

Bob went to Bakersfield last Thursday and was supposed to get back Friday night but his flight was cancelled. He got back Saturday around 3:00. Saturday was his 40th birthday.

To Aunt Nell
Who is that knocking
on my winter door
tap-tapping as death
squeezes at my heart?

Oh, it’s you, come
to keep me company.
I’m glad you’re here
to see me on my way.
I do like a friend on
a snowy morning.

Used to be I rode my horse
through these mountains
along the winding trails.
But now I guess I’ll have to
travel on my own.

If you’ll just hold
my hand a minute
I’ll be ready.
I’ve not been there before
so I’m a little anxious.

But I’ve never been one
to sit still for long.

The cold and snowy day of Aunt Nell’s funeral I taught nursery school, went home to grab a quick lunch and clean up the dishes from making doughnuts at nursery school, changed clothes and just made it to the ceremony. Cheryl and Scott made room for me to sit between them. Rev. Jim Austin read a history of Aunt Nell that Bob and Florence had prepared. Afterwards we went to Florence and Leonard’s where a buffet was provided for about 50 people—people all up and down the street had brought food. Relatives came from all over—Ana May from Washington, Gene from Oregon, Aunt Nell’s grandchildren and only great grandchild from Orleans.

Later I picked up Rebecca from Pearl Gott’s where she had gone for piano lessons, Jeff from Doris’ (she had taken him to his piano lesson at Harriet Mathies’ and back to her house), Clarke from Linda Lindsey’s. Jeff just recently started lessons. Rebecca had a difficult adjustment period—having to share “her” piano, etc. He’s enjoying it and doing well. The adult parent nursery school for that night was cancelled because of slippery conditions. 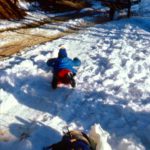 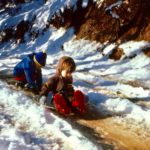 Friday I took Clarke to Linda’s and took a walk. “Snow was dropping off the trees and, in some places, there were five or six inches. Got a couple of pictures at Pinky Gulch. Snow falling off the trees into the creek sounds like fish jumping in a lake. 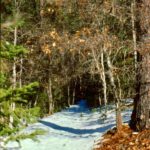 Walking in snow takes longer—It’s like walking in loose sand. I really got hot walking, had on long underwear, a sweatshirt and my parka. Ate lunch where I wasn’t sitting under a tree—in part of the Pinky Gulch drainage. Came across a couple of places on the trail where there were lots of birds but couldn’t really figure out why they were there—no open ground or running water, no excess of berries (manzanita or rosehips). Saw flickers, varied thrushes, robins, towhees, and even some cedar waxwings. Saw a Steller’s jay when I was eating lunch. 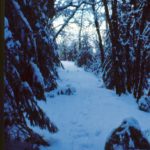 “I was starting to read Pilgrim at Tinker Creek. “Oliver Berglund’s name was first on the card so I think he must have ordered it.”

Here was a day I didn’t want to repeat. Rebecca had been home sick, with a fever. “I’d had to rush home from nursery school, eat a sandwich, take Rebecca’s temperature (I’d had her call me every hour when I was at work), take Clarke to Linda Lindsey’s be back at nursery school by 1:00 for a meeting with Brigitte and Holly Stevensson (from Shasta College) who is in charge of their nursery school training program. At 2:00, as we were ending the meeting, Jeffrey called. He’d forgotten his piano music books at school and had gone home. I drove by the school to get his music, up to the house to get him, over to the Mathies’ to drop him off, then over to the dentist where I had a 2:30 appointment. Then went at 3:30 to get Jeff (his piano teacher let him stay an extra half hour), up to Linda’s to get Clarke, and then home. Read the paper, fixed diner for the children, washed the dishes, then went over to Ohde’s to get Linda, took her to the house and went to the Gables for a Forest Forum meeting.

We had reservations for 25 and 35 showed up. We were ordering from the menu so it took forever. Had a slight run-in with another member of our advisory group about his wanting to the group to make a statement to the board of supervisors about the National Recreation Area. Still another member made a number of remarks during the evening about things like “A woman’s place is in the home.” There were three drawings and I won two of them but I put one back in for another drawing and kept the first, which turned out to be two steaks (which we had that weekend and were delicious). The talk lasted too long and it was 11:00 pm before I got home.”

That Saturday I took the three children to Redding, leaving at 8:30 a.m. to go to the college to see the Magic Show. A busload of children from Weaverville went too. We took a lunch and ate in the city park after the program and then came home where we found Bob had arrived about 20 minutes before we did. He’d been in San Francisco going to a computer graphics school. He’d gone to Eureka to look at some stuff there for the bridge and flown to San Francisco from there. Friday night when he was supposed to fly to Eureka he’d flown up and then back to S.F. because of fog. Flew into Redding Saturday morning. 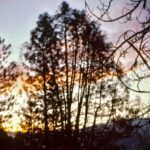