Late July: had green beans, lettuce and squash from the garden tonight. My hands were getting black lines in them from the apples. Well, and probably the blackberries. 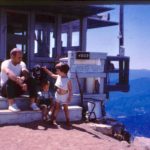 After a breakfast of applesauce, French toast and bacon, I made a lunch, Bob mowed the lawn, and we left for Ironside Mt. Lookout arriving there a little before noon. We stopped first in Big Bar to get the ingredients for ice cream. “Just as we got there a car containing John and Judy Schilling and son, Jeffrey, drove up. So we all chatted, ate lunch, made ice cream and ate it. They left around 3:30 and we about an hour later. It was very nice seeing Doris again—I miss talking to her in the summer. They have a tent set up for Eric and Linda when they’re there.” 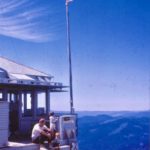 Lots of clearcuts to be seen from Ironside and one big cut just before reaching the lookout—really a mess. Eric and Linda go down to a deep hole fed by a spring in this clearcut area and swim in it. I took up a few apples, applesauce and squash.

From the lookout we could see all of the New River area, Daley Ranch, Moss Lumber and Salyer. Could look out across to Potato Mt., Mary Blaine, Pony Mt. and Limestone Ridge. Lots of fires started in the New River and Six Rivers areas from the last storm. We could see smoke coming from Grouse Creek.

Monday evening Bob called at 5:00 to say he wanted to stay in town that night to finish up some work as they were really swamped.

Both children played a lot in the plastic pool that afternoon. “Rebecca is doing much better. She is really quite a complicated little individual and it’s hard for me to see the whole picture. She’s reading , and re-reading, Bronson’s book on Coyotes—also her book on the American Indians. She seems to enjoy the Burgess books a lot and has a book of poems from the library called “Just Around the Corner”. “

A few days later Bob needed to stay in town again. He was going to work on the translator with Jim Austin the next day and on pipe fixtures at the house in the afternoon. After he got home he saw something that needed correcting so went up and worked on it more, taking Dave Ohde with him. He was hurrying and so something went wrong and he went up again that night and worked on it. “He called from Oregon Mt. at 10:30 saying he was just leaving. I suggested that he stay in town another night rather than coming clear out to the ranch. He sounded so tired.”

That day I had baked two apple pies and frozen one. Also made chocolate chip cookie dough but only one batch of cookies because the house was getting quite warm from the oven. “Rebecca and Jeffrey ate up under the apple tree. She wanted a lunch menu so I put what was to be for lunch on a green folded paper entitled-Menu—Rebecca’s Tree House. “

The next day I baked the rest of the cookies and worked on the fence around the little pear tree. The children stayed in the orchard with me, munching apples, until Rebecca took Jeffrey down to the house and read a book to him for over half an hour. I nailed together some 2 x 4s, plywood and a small log to make another longer table under the apple tree. I added to Rebecca’s menu and the three of us ate lunch up there.

When Jeff wants his shoes and socks off he says, “feet off, feet off.” He wants three or four books read to him when he goes down for a nap or at bedtime.

I was reading a book by William O. Douglas called “My Wilderness” about the Pacific Northwest. He had hiked and camped in that area since boyhood and did a wonderful job of describing it. He also talked bout areas he used to reach by trail that now had paved roads into them. 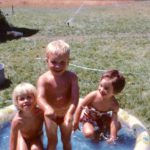 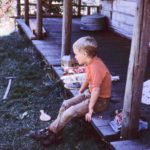 Angenett and children arrived on a Tuesday and stayed overnight. They played in the sprinkler and the little pool. We made home-made ice cream. The next day we ate breakfast in shifts. Bob and Jeff first because he had to go to work. The rest of us took a walk up through the meadow. After lunch they played some more and Nick helped me pick apples for them to take with them when they left that afternoon to go back out to Coffee Creek. Angenett and I had a good visit. After they left the two children and I took naps. 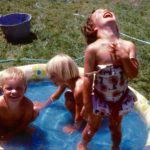 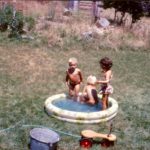 A couple of days later Bob brought home the news that Cheryl Morris and Janet A. had been in a car accident, totaling Janet’s car. Cheryl had some puncture wounds in her knee.

Made yeast cinnamon rolls and helped Rebecca make cookies. She was getting quite good at using measuring spoons. Picked nearly a gallon of green beans from our garden. After lunch we drove down to the creek and the children played in the water for about an hour. Both were getting more used to moving water and slippery rocks.

Rebecca was reading a book about babies—how they are conceived, etc. I read it to her a couple of times first. She was very interested and treated it very matter-of-factly as if it were any library book but slightly special.

One Sunday we took the children to Florence and Leonard’s and went out to the lake to join Gilda and Sandy and the Riordans on the Sander’s raft. We all went in their boat out on the lake to water ski. Bob came right up on the first try—hadn’t skied for seven or eight years. I’d never done it and it took me many tries but I finally made it and was up three or four times. Once I figured out that my left leg was stronger it made getting up easier. We went back to the raft for drinks and dinner. The next day we were both very sore.

We now had two ditches across our driveway in town (top and bottom). The plan was to have a pipe going down to a sump by Oregon Street and pump from there up into the sewer district pipe.

After a trip to Redding to see the pediatrician we learned that Rebecca would need to start wearing a brace at night to help correct her toeing in. We’d need to take an old pair of high-top shoes down to have them attached to a metal brace. Also had to order new corrective shoes for both children. Rebecca and I went to lunch at Sambo’s afterwards where I saw my Shasta College speech and drama instructor. She remembered me after she learned my former name.

Out at the ranch again, a couple of days later, I did two batches of laundry; baked 4 dozen cookies; went to Big Bar and bought oil for the generator; went to Price Creek and picked blackberries. Gave Rebecca an extra nickel on her allowance because she did such a good job of babysitting Jeff by picking blackberries for both of them and playing with him in the car. After lunch all of us napped. I sorted berries first though, setting aside four cups for a pie, freezing three pints, and saving enough for dessert. 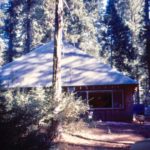 On August 21st I borrowed Florence and Leonard’s car, with air conditioning, and took the two children to Quincy to see Peter and family. Peter was going to Forestry School there. “It sure takes a lot longer to drive and feed, give drinks, pick toys off the floor, etc.” with just one adult. The Forestry Camp was off a dirt road about 10 miles from Quincy. They were living in one side of a duplex. The children’s beds were on a long, screened porch. We slept in a tent cabin where Angenett kept their clothes. Friends of theirs arrived shortly afterward with three children. Angenett took us to Nancy and David Adrian’s while she did laundry. They were living in a big house but were about to move. The next day we left for Weaverville. When we got there, around 4:00, we had to walk up to the house because of the ditches. I left the children in the house and then made 3 wheelbarrow loads up to the house. We were all exhausted.

The following day I put gas in Florence and Leonard’s car and traded the car for our truck. Went to Trinity Gas but no one was there to put the gas tanks in the truck. Worked on the ditch for 20 minutes, but it was hot. Vacuumed the house. Children were coming down with a bug. Went to the gas company again but it was 5:00 and they were closed. The people at Wards called Carol Weingardner for me. He had apparently driven around town looking for the truck and had gone home. I was really embarrassed. Went to his house and he traded tanks for me. They were going out and we had delayed them. Drove to Big Bar, ate a sandwich and salad there. Went home, put children to bed, hauled things from the truck. Set sprinklers in the garden. Bob must have been out of town because I was wondering what he was doing that night.

Next day—kids with fevers. Bob called saying he’d be home around 9:00 or 10:00 that night, then called a little before 9:00 pm and said he was in Redding and would stay in Weaverville that night.

By Saturday we could drive to the first turn on the Weaverville driveway. Took Jeff in to get medication. 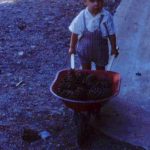 Tuesday was Jeff’s 2nd birthday and he loved it. Florence and Leonard gave him a big cab with a trailer van with four horses in it; a stick horse from Rebecca who also received one, at her suggestion; and some wooden cars. Grandparents came for dinner and the cake was shaped and decorated like a truck. The next day I went over to the high school to talk to Marne Wilkins about my job in the library. I would have the morning shift and she’d take the afternoon. Nice library in the new high school. The down side would be having students using the library for study hall.

On the 31st I drove to Big Bar where we got gas for the car and the three containers filled for the generator. We ate lunch at Town’s—grilled cheese sandwiches for the children, hamburger and coffee for me. I was still making applesauce and jelly.

Florence and I talked about doing a book together with me doing the writing and her the illustrations. Sure wish that had happened!