January:
Rebecca was taking piano lessons from Mrs. Gott and seemed to enjoy them.

Often I seemed to have had to play catch-up with my journal, trying to remember what happened in previous weeks.

On the 8th we drove to Palo Alto. Connie Martin stayed with the children. On the 9th Bob spent time in the Stanford Library and I spent time in the Stanford bookstore. After lunch we went to Ingrid Woods’ and Steve Cummings’ wedding in the Stanford Chapel where everyone sat in a semi-circle on the platform with them. Music was from a harpsichord. The reception was in Burlingame and Helen Woods made the cake. We gave them a crank ice cream freezer. Ingrid was working for a dress designing shop and Steve was serving two years in hospital work in S.F. instead of being in the army. That afternoon we got a room in a motel on Geary Street in S.F. and that night went to the symphony (my first), conducted by Ozawa. Sunday we looked at the line outside the Van Gogh exhibit at the DeYoung Museum and decided we didn’t have that much time so went to Berkeley and visited with the Lewis’ and then drove home. 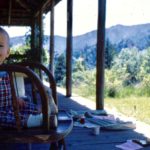 The Friday morning of the day we left to go to Palo Alto, Bob had been in Redding as part of a three-person committee going through 38 applications for Superintendent of Schools to choose about six possibilities.

“On the 18th our music class met at DeRosears for a surprise party final. We dressed hippy style. I wore Clarke’s link belt with beads hanging from it around my head, a tie/dye shirt that Scott did for me, Scott’s tie/ dye levis and cowboy boots. Bob had a class so I didn’t think he’d come About 9 he knocked at the door wearing a mop wig and a blanket. Really funny. We had a good time.”

On the 23rd we went to the Trinity Players’ play—Never too Late.

Then we started getting involved in meetings about the proposed Salmon Trinity Alps Wilderness Area. I was going to go to a Siskiyou County Board of Supervisors’ meeting with Leonard in Yreka but decided not to since Clarke and Jeff had been ill. Meetings were coming up the next week in various communities.

Clarke and Jeff had a croupy cough and Jeff had a temperature. Rebecca had had it the previous week and I’d taken her to see Dr. Breeden. Took the boys to see Dr. Nielson in the emergency room. Was up most of the night with them and about an hour with Rebecca who was on a crying jag—maybe a bad dream.

Then no writing in the journal until March 25th, again catching up.

“The first week in February I went to both the evening and afternoon wilderness meetings in Redding. Left the V.W. at Bingham motors and took a cab to the Junior College. Fred Esselink was there and gave me a ride back to the V.W. place. His long red hair and beard caused some raised eyebrows! When I worked in the high school library Fred used to bring photos of the Trinity Alps to show me. 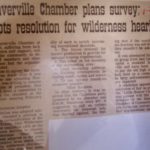 I made my statement in Redding—followed some lumber people. I was really nervous. That evening Florence, Leonard, and Horace Jones came down. A U.S.F.S. panel suggested I speak again that evening so I did. Each meeting was preceded by a slide program (narrated) using many of Alice Jones’ slides. I met Dave Johnson after the evening program—hadn’t seen him since he was best man at Angenett’s and Peter’s wedding. “ 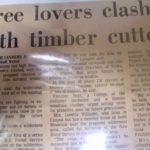 The next day Bob and I attended the afternoon and evening meetings in Weaverville (Bob was in in S. California the preceding day). Over 200 people attended each meeting and people of all ages spoke—most in favor of a wilderness area and preferably of expanding it. Our local editor sent no one to the meetings so I wrote a long article on them for the paper a few days later. 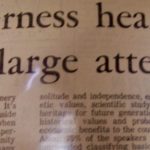 Thursday night Alice, Horace, Leonard, Jim Barrett, Bob and I went to Willow Creek to their meeting. Bob gave his talk again, adapting it to the area very well.

“Since then I wrote another article intended for the Recreation Guide of the Trinity Journal but it wasn’t used; wrote a letter to the American Forests magazine concerning John Keats, a representative of the Western Lumber Manufacturer’s Association; wrote an article for the National Parks magazine—didn’t hear back from either of the last two. Bob went to a meeting in Fort Jones with Alice and Horace.” 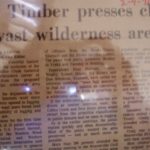 I was taking a drawing class on Tuesday nights from Marne Wilkins. Was learning a lot but really had to work hard. The three hours “whizzed by”. Bob was taking another administration class.

Bob was working on a proposal for management within the company to submit to his boss by April 1st. He was offered “a very big job promotion to Bakersfield but turned it down because he felt he hadn’t done enough here yet and because he’d rather live here. The offer really shows his boss has confidence in his abilities though. “

Bob was given a company car to use—a Ford Torino.

I spent an afternoon and evening in Redding about a month before that attending meetings on the Gifted Child. The afternoon was for teachers and about 25 attended. Only 12 people were at the evening one for parents, most from Trinity County.

I was substituting a lot more. Linda Lindsey started taking care of children at her house. Little did I know that this was the start of our great friendship and that her youngest and my youngest would become lifelong friends.

We started having discussions with Humboldt Fir. They wanted to log near the Upper Ranch and had a right-of-way across our place on the original roads. (Access to the ranch had been only trail until logging took place years before). Some of these no longer existed so legally we could probably have kept them out. We were trying to see whether we could get them to build a road across from the house but way up the hill, which would join the future U.S.F.S. road going up to timber in Big French Creek. “If so, Bob may not have to build a bridge.” One day we tromped around up there with Candy and Jim Fields (she’s a part-time nurse and he’s a surveyor for the U.S.F.S.). Looked for a possible route. Humboldt Fir and the U.S.F.S. didn’t agree on Humboldt Fir’s boundaries though.

April 15
Substituted for Mr. Turnbull at the high school, worked for Hardison yesterday and then again the next day for Mr. Turnbull. I took Rebecca to Florence and Leonard’s and Clarke and Jeffrey to Linda Lindsey’s. On the 15th Wendy Omstead came to the house.

One weekend there was a Rotary dinner and Lucille Snyder and I worked on salad preparation for 150 people. I was to slice and butter 15 loaves of French bread, which took most of the afternoon.

Rebecca and I went to Emily Holland’s wedding. Bob had gone to the Bay Area to look for a book.

Easter we had a hunt at 7 a.m. and then another one around 10 over at Florence and Leonard’s. “We are overrun with colored eggs!”

“We’re once again having second thoughts about Humboldt Fir. Rumor has it that the U.S.F.S. will be fighting them in court about the boundaries, and also a 2-year moratorium on clear-cutting for the Forest Service has been proposed in a Senate Committee. If this goes through and further studies indicate that clear-cutting should be stopped the U.S.F.S. may never make the sales up Big French Creek and we’d have the Humboldt Fir road through us for nothing.”

One afternoon Tigger scratched Jeffrey thoroughly—neck, arm, back. Had to take him (Jeff) down for a DPT shot.

May 15
On the 24th of April we started for Oregon. Stayed the first night in Grants Pass. Ate lunch at Castle Crags. It was cold and windy. The children watched two trains and tasted the water from the sulpher spring. Rebecca started feeling ill that day. We drove to Nehalem the next day, arriving about 6 p.m. My parents were very happy to see us. We spent Monday at the beach. 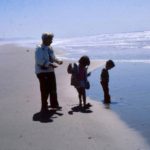 Rebecca probably had a temperature, but she seemed to enjoy herself. “Jeffrey was ecstatic with the waves coming in over his feet. He’d get almost hypnotized and follow the waves out.” Clarke began getting sick. Tuesday we stayed at the house. The next day we left for Seattle. I was concerned about my parents isolating themselves and neither one seeming very happy. We stayed several days with my eldest brother, Ben, and his family. Our children enjoyed playing with theirs—Jeff felt like a big boy playing with cousin Mark and Rebecca adored Dana, who had gotten quite pretty. My younger brother, Richard and his wife, Charlotte stopped by. 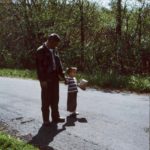 Rebecca began to feel better after sleeping a lot and on Friday we took a 15-minute ride to Whidby Island. Bob made up Rotary at Oak Harbor while the children and I ate at the city park along the beach. It was windy and cold but the children enjoyed the playground equipment and collecting shells. Did a bit of tide-pooling after Rotary. There was a tulip show at an elementary school and we visited that—many people were in Dutch costumes.

On the way back to Weaverville we stopped in Leavenworth and took a few pictures of the Bavarian buildings. From there we drove to Madras where we got the last room in one of the few vacant motels.

I started working at the Joss House from 10-5 on Wednesdays and Thursdays the first week in May and would just do that until their summer help arrived. I also had nursery school duty three Tuesdays in a row (parent nursery school so parents participated on a rotating basis). Linda Lindsey was watching the children on Wednesdays and Wendy Omstead coming to the house on Thursdays. 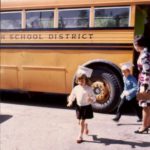 Gladys Ehlerding tested Rebecca (Wisc test) and said she was reading at a 7th grade level and was gifted. Mary Anne and I are considering sending Rebecca and Scott to Douglas City next year.