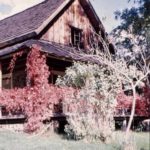 Wednesday – Took all three children, who had colds, to Redding to get Rebecca and Jeff’s feet checked. Florence rode down with us to bring back Uncle Stanford’s pickup. We stopped at Hislops for an hour on the way home and Clarke cried from when we left there until we got home. Ate dinner at Florence and Leonard’s. Bob had gone to Bakersfield and would be back Friday.

We had a week of rain that included a beautiful rainbow one afternoon. By then the children were all well but Tigger, the cat, was sick. Bob and Rebecca took him down to Sally Patton’s for a shot and some medicine.

I substituted Friday afternoon at the high school for Mr. Odell (biological science). Then, that Sunday we went out to the ranch where we picked the few remaining apples. We heard some coyotes. The Virginia Creeper vines on the porch were scarlet.

On Halloween I took the older two trick-or-treating while Bob stayed home with Clarke. When I was a child, we didn’t trick-or-treat. We lived about half a mile from the little village of Castella and our parents wouldn’t have let us even if we’d lived there instead of the state park. A few times we played tricks on children who were brave enough to come up along the dark Highway 99 to our house. Once we put just enough rocks in a cardboard box to make it rattle and dragged it across the driveway with a rope so it looked as if it were moving all by itself. Another time I remember my brothers throwing rotten apples.

Rebecca was a clown again, as she had been last year, wearing a costume Florence had made for her father when he was her age. Jeff was a cowboy with make-up mustache and beard. “They were both cute and so excited. Every time someone pretended not to know him. Jeff would push back his hat and say “I’m Jeffwy”. Rebecca had made a list of people she wanted to see so we did a lot of driving.

On November 1st, a Sunday, we drove out to the ranch. The English walnut was a big butterball of color. Bob had gone out earlier with the store truck to get the generator and brace the water tank to keep it from collapsing in snow. I defrosted the refrigerator and we ate at Big Bar. 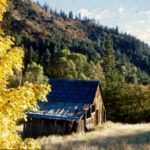 Our social activities were increasing, some due to Bob’s new job. But that week I was out four nights: Monday for my music class; Wednesday Bob and I went to a phone company supervisors’ dinner (all those from Garberville were over for Bob’s announcement of reorganization)—Barbara Austin came up to the house to watch the children; Thursday night a nursery school parents’ meeting; Friday I took Rebecca, Jeffrey and Linda Ohde to Redding to see the marionettes in the Sorcerer’s Apprentice and Little Red Riding Hood—Marge Hislop had picked up the tickets for me.

That weekend Bob finished his half of the intercom and started on the smoke detector.

We went to a Chamber of Commerce meeting honoring Moon Lee and Vernon Ryan for 60 years in business. I skipped my music class, being so fond of Vernon.

One afternoon I picked up Rebecca from school and Jeff, and later took Clarke over to Dorothy Goodyear. Took Tigger to Redding and left him at the vet’s. Didn’t get home till about 7:00.

Another Friday afternoon substituting for Mr. Odell. “No problems till the last hour when I was very tired (not much sleep the night before). Bob had gone to Garberville Thursday and stayed overnight. The students I was having trouble with and I decided we were having problems because it was Friday the 13th”.

Bob spent most of that weekend working on the new translator building on Oregon Mountain.

Rebecca, Jeff and I left right after Rebecca got out of kindergarten to pick up Tigger from the vet in Redding. $40.50 worth of medicine and hospital. Had to keep him inside until he finished his prescription and he meowed constantly.

We bought a set of used bunk beds. When Bob brought them home a few days later they reeked of tobacco smoke. We planned to keep one mattress and sell or give the other to Tom’s New and Used. That same day, a Sunday, he spent from 1:00-7:00 working on Oregon Mountain, then went back up again, wanting to get the translators working well before snows started. Hal Goodyear and Leonard helped him for awhile in the afternoon. Raining all day. “He’ll probably be there until midnight.”

I put several coats of varnish on a dresser and we planned to sand and varnish the bunk beds.

At music class Mary Ann Field said that Scotty wanted the 1st grade boys in one room and the 1st grade girls in another next year. He said Rebecca was the only girl he wanted in his room. 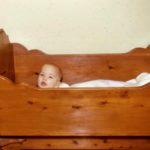 Jeff, Clarke, Bob and I went to Rebecca’s kindergarten powwow. “I think Rebecca was delighted to have Bob be able to go.” The next day I substituted at Lewiston Elementary School. “It ‘was tiring but interesting—5th, 4th and 3rd graders seem very young and small after high school age.”

Thanksgiving dinner was at Florence and Leonard’s. Big gathering and Uncle Stanford showed slides of a trip on the Rogue River (jet boats?) he made with Florence, Leonard and Aunt Nell. “The children played hide and seek or bumping down the stairs during most of the slide show.”

It snowed Thanksgiving night and we had about six inches by morning. Bob went up on Oregon Mountain again to make some final adjustments. He said when he left there was nearly 18 inches of snow.
The next three days we worked on the bureaus and beds.

In mid-December Bob was back in Garberville for three days. Then he was in S. California-Bakersfield, Oildale, Victorville, etc. for a week. The week after that we took Rebecca and Jeff and went to Garberville for the Garberville employees’ Christmas party. The children stayed with a sitter at Chuck Meyers ‘ house. We stayed up until 4:00 a.m. with breakfast at 3:00. Bob and I danced with each other for the first time. On the way home we stopped at the Founder’s Tree and walked around in the redwoods in the rain.

And then there was a phone company Christmas party in Weaverville.

My parents sent us a box of holly from their place in Nehalem, Oregon. I wrote to them almost every week. In reading my notes I can see we rarely got up there to see them. And they didn’t come down.

We moved Rebecca and Jeffrey into their room. We were finally going to move our bed from the living room into a bedroom! Rebecca had the top bunk and Jeff the bottom. Clarke would soon join them in his crib but was still in our room in the cradle. “Jeffrey says they are called “bump beds” because you bump your head getting into them.” 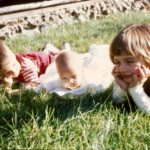 Christmas was more fun with them older and taking some interest in how others reacted to gifts. They had enjoyed helping decorate the tree. They opened their stockings on our bed. Rebecca wanted to unwrap and get on to the next while Jeff wanted to play for awhile with each present. Santa didn’t wrap Santa’s gifts so those were seen immediately—didn’t when I was a child either! Rebecca got a Sahsha doll and Jeff a barn with animals. Jeff gave me some nice green glasses, although apparently he had wanted to give me a truck. And Rebecca gave me a blouse although I really liked the bookmark she had made at school. 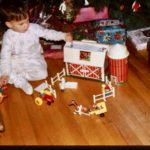 I won’t give details but it’s worth mentioning, just to demonstrate the time of the 1970s, that my niece, Dana, made leather-link belts for all the cousins and Angenett and Peter’s children made tie/dye shirts. Kathleen also made gifts, including a pillow for Clarke.

Good visits with my brother, Peter, and Angenett. I noted that I really missed the Twight stimulating verbal exchanges with the quiet Morris clan and said that to say that probably sounded awful. That lack of verbal exchange was also one of the things I enjoyed about the Morrises. Funny.

“Rebecca is such a busy girl—wants to be doing something all the time. And demands a lot of feedback. Well, last week I said, (worn out from responding to the constant chatter)—“You’ve got verbal diarrhea”. She knew what diarrhea was but not “verbal”. Bob looked it up in the dictionary with her. She was amused. A little later Jeffrey, holding a plug-in nightlight said, “Children who play with wires get hurt.” We nodded our heads approvingly. “Children who play with wires get verbal diarrhea.”

“The New Year’s party was fun. Interesting people. Bob and I have never gone out on New Year’s before. I met a woman named Candy Fields, whose husband didn’t come because he doesn’t like parties. Both love to backpack. They’ve lived all over the world. I’d met her once before in the doctor’s office –when we both were pregnant–but we’d not talked much. Bob played his banjo and I my accordion, and Bill Harger his guitar. At 2:30 Bob went home. I asked him if he’d mind if I stayed and he didn’t. So we then went to DeRosears for breakfast. Ohdes took me home at 5:30. Couldn’t sleep. Boy, was the next day long! Rebecca went over to Van Duyn’s in the afternoon to stay overnight. Snowing some.”