June 23rd: “Maybe I can write more often now that we’re out at the ranch again.” Moved out Sunday the 20th.

Bob spent most of Saturday helping Rotary build a water fountain by the bandstand. That evening he brought the washing machine out. The previous Saturday Clarke stayed with Linda Lindsey and the rest of us came out. Bob hiked around with Roy Blair looking for property corners. I planted a garden and Rebecca and Jeff each planted small gardens. Sunday he and Bob Grant brought the generator out. Then he made another trip with his car and I with the V.W.

On the 4th we left the children with Linda and went to Cheryl Morris’ high school graduation. Rebecca had kindergarten graduation that day. I’d really become quite fond of a number of that year’s seniors and took cards for some, ecology posters for two, and gave paperback copies of A Sand County Almanac to two others.

My last two days at the Joss House were the 2nd and 3rd. 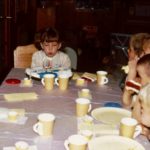 Rebecca had a 6th birthday party. We invited six children but two were going to be out of town so I called Alice Jones and she brought Nick, Jessica and Cedric over. Fortunately there was just enough of everything to go around. Jan Goodyear helped out. 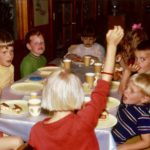 It was a Snoopy birthday with a Snoopy cake, Snoopy invitations, and a hunt for a Snoopy bone. Finding a bone resulted in receiving a small Frisbee. Rebecca got a baby mallard from the Hoopers but a week later it died. She was heartbroken. We were planning to get two more after they hatched. 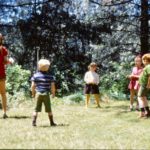 Clarke got sick the Saturday we were out at the ranch and up-chucked all over me in the car on the way home. I was supposed to take the three Twight children the next day but couldn’t, of course. He was sick Sunday, Monday and part of Tuesday. Sunday, when I was sitting out on the porch trying to regain my sanity by playing my accordion, Jeffrey hurt his foot. He yelped as if it really hurt but was soon playing again, although limping. Monday I took him to the doctor and discovered he had a broken bone in his right foot, the metatarsal. All he’d done was jump off a small, plastic slide but he just hit wrong. He got a temporary and then Friday, (18th) he got a permanent cast on with a foam rubber pad. It was really hard on him and on Rebecca, because activities were a lot more restricted than they were before that. And I had to carry him until he got the permanent cast. 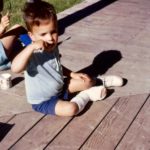 The following Monday we were out at the ranch but had problems with the generator. Tried to put up the laundry line but after many efforts of untangling it found the hook nearly straight. Hung some clothes up anyway and it fell so hung them on a short line. Tuesday was much better. Took a walk with the children up to the flat in the woods. Rebecca wanted o go on up to the water tank which Bob put up there, so we did. I carried Jeff (and Clarke in the pack) all the way back. We had fun though. It took us over an hour- and- a- half. I had come back for a jar to put a caterpillar in and we dawdled, squatting in the tall grass up near the wild rose bushes to get a rabbit’s view of the world, etc.

The evening of the 25th I was writing by candlelight because Bob was working on the generator. The previous day we’d gone into town and Clarke had developed a fever of over 104. Dr. Breeden’s day off, Dr. Dr. Polka on vacation, Dr. Nielsen’s office said he could see us at 5:45. He had tonsillitis. I’d talked to Dr. Breeden a couple of days earlier about his swollen eye and he had thought then that Clarke might have tonsillitis.

Rebecca talked about quitting piano lessons even though she loved them. Shelly Adrian had told Rebecca she was quitting and that’s when Rebecca started saying that. The she found out that Marion Dano was taking lessons and decided she’d keep going after all, that she would take them “until she was a lady.”

Virgil DeLapp was working on the house again, this time covering the outside of the addition with shingles. We were going to have to get the whole house reroofed and maybe painted. That morning Florence took the children for half an hour while I ran some errands downtown and went to Varney’s where I had coffee and a doughnut with Leonard, Mike Harris, and Bob Grant. Later went to Van Duyn’s for a few minutes with the children, and Marilyn gave Rebecca a yellow scooter skirt (have no idea what that was!).

The next week Bob was going to Bakersfield for a week. I got Rebecca a loose-leaf binder to start a journal. Angenett said Jessica’s teacher suggested this for Jessica. I thought I’d get Jeff to dictate some things to me for a notebook for him. She started writing in it and seemed to enjoy that. Clarke was getting better.

We went out to the ranch and would be there on our own for a week as Bob left the next day. “I get nervous at night without him here-not about being here but about stray people coming in—not that it’s too likely I suppose. Will take the pack upstairs tonight because if there were a fire I’d need it.” (for Clarke) Clarke got sick to his stomach and then broke out in a splotchy rash. I contacted Dr. Breeden about Clarke’s rash and he said to stop giving him campicillin. I’d wondered whether the rash was an allergic reaction and guess I was correct.

Jeffrey was going through a teasing stage but often with surprisingly adult humor. However, he spent a good part of one day echoing Rebecca—most frustrating for her. “I tried doing it to him for awhile and he didn’t like it so maybe he’ll get the idea.”

On the 29th I left Rebecca and Clarke with Linda and took Jeffrey over to the emergency room to get his old cast off and put on a new one. Ran a bunch of errands and then got Jeffrey a dump truck at the Nic-Nac Shack. Figured he needed something to do that didn’t involve running around on the cast and that it would help make up for all the presents his sister had gotten for her birthday. Went back to the ranch. Bob called and didn’t sound very enthusiastic about the class he was taking.

The next day Clarke was happy in his play pen for awhile but then later I put him on the lawn in a 3-foot wide strip of shade where he played with my hat and chewed on dandelion leaves while I cut grass from around the asters. Rebecca played with her dolls near the maple tree by the driveway and Jeff played in the dirt with his dump truck, then on the porch. He couldn’t walk on the new cast yet and was cranky. It was a chore for me during that time hauling him to the outhouse and up the stairs. 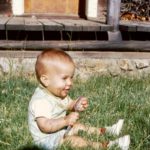 Florence called on the 30th to say the rest of the culvert Bob had ordered was in their barnyard. “I think she worries about us.”

Doris called from Weaver Bally and we talked for almost an hour. “It was so good to gab with her—it’s been nearly a month now. She’s enjoying the lookout so far—says the view into the back country is superb.”

July 4th we watched the parade from the phone company balcony. It was shady and a good view. Then we went up to the Woods to swim for awhile, taking turns watching our two youngest. “Bob and I are in a good state right now—excellent, actually, and really communicating.”
From there we went out Canyon Creek for the usual family and friends gathering.

On the 11th Bob left to go to Garberville and not get back until Wednesday but he was out at the ranch with us all that weekend.

I couldn’t get the generator started and called Frank Walden who said he was going to Weaverville and would pick one up at Miller’s for me. Later I was able to get it started. . (I’m guessing I was able to contact Frank before he left.)

Bob had fixed the clothesline and also put up a swimming pool just below the house–3’ x 12’. The doe that had been hanging around (standing on her hind feet to get apples) showed up with a fawn. This was a cooler than normal summer and we’d been having a fire in the wood cook stove every morning.

Thursday, July 8th “I had a big treat. Florence took the children from 10 to 6:00 and I went hiking up Long Canyon. I was really quite excited about it beforehand, which was a mystery to Rebecca! 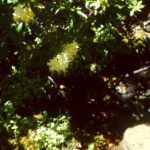 From the beginning of the trail on it was beautiful. Large bushes of blue ceanothus were in full bloom, their honey fragrance filling the air. As the trail began to climb it was more forested. The East Fork of Stuart’s Fork roared not far from the trail most of the way. Numerous creeks and small streams crossed the trail. It was a warm day and I kept stopping to drink—partly just for the pleasure of my freedom I suppose and partly for thirst. In one spot were azaleas in bloom, tiger lilies, and yellow monkey flowers. I picked an azalea and put it in my hat. Every time I went from shade to sunshine I could smell it. 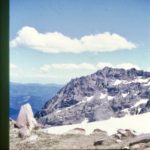 I ate lunch after walking an hour, where the trail forks, with one branch going to Bowerman Meadows. Foaming water—icy cold. Afterwards I met a family coming out with packs on. The youngest, a boy about 8 or 10, fell right in front of me. I helped him up and they went on their way. From then on it was solitude until I came to the uppermost meadow part of Long Canyon. Here there was a party of 8 or 10 people who had apparently come in on horseback for the day. 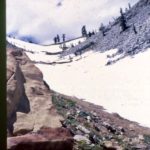 I continued on but snow blocked the trail so I followed footprints of other hikers or horses, which zig-zagged up the steep slope. Stopped by the edge of one snow field where the creek had formed snow caves about three feet high. Such cool air coming from them. Went on up to the last narrow pass before Bee Tree Gap. The wind was blowing hard and it was 2 o’clock, and rocks were rolling into the area so I decided to turn back. It was a wonderful day. And to top it off, Florence had dinner for us that night. “ 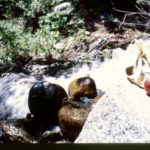 Rebecca stayed overnight in the house trailer with Noel and Florence. We stayed at our place and came out to the ranch Friday.